Because we need a daily reminder of the obscene amounts of money that are sloshing into our politics, like so much Union Carbide goop into all the known sources of potable water, Politico reports Wednesday that "Republican super PACs and other outside groups shaped by a loose network of prominent conservatives – including Karl Rove, the Koch brothers and Tom Donohue of the U.S. Chamber of Commerce – plan to spend roughly $1 billion on November’s elections for the White House and control of Congress, according to officials familiar with the groups' internal operations."

This, I guess, is intended to reflect that Politico really, really meant it when it reported two weeks ago that Republican super PACs plan to raise an assload of money and spend it on ads. And the Democrats? Well, they plan to do the same, according to widely-bandied about rumors that Team Obama Reelect has its sights set on bringing home a billion ducats of its own, to spend on its own ads.

Of course, if you've donated money to a candidate, there's still a good chance that you've funded something worthwhile. Campaigns put money to all sorts of productive uses: they open field offices and recruit volunteers and build out infrastructure and fund "get out the vote" efforts and conduct polling and research. But it's important to remember that super PAC money doesn't pay for any of that. Super PACs (wink-wink, nudge-nudge) are not allowed to coordinate with campaigns, and so their money doesn't go to the productive side of a presidential bid. Instead, it is used exclusively to fund the speculative messaging mill, in which political dark artists toss trash at the wall to see what sticks.

By and large, the productive use of campaign donations doesn't really interest anyone. Instead, we'll probably get repeated, breathless reports about the super PAC battles from now until the end of the election -- so if you're not up for the endurance test that is being repeatedly told that people are raising lots of money and then spending that money and then sitting back and saying, "Welp, hope that worked!" without questioning whether there is even a point to it all, then I recommend you just decamp to some remote beach and commune with the ocean for the next few months.

Rarely is it asked, "Is there even a point to spending 2 billion dollars on an election?" Surely there are much better uses to which two billion dollars could be put, instead of a grand political debate that only gets interesting for about two months and even then includes (and I'm being very generous here) about 100 total hours of what sane people would call "substance." After all, we're talking about a competition between two ideological opponents who are ostensibly supposed to lay out their best ideas and ask us to choose between them.

Since when did geniunely good ideas need 2 billion dollars to sell themselves? Since never. That 2 billion can be rightly seen as turd polish for campaign ad creatives (who generally speaking, are the dregs of all advertising creatives). But here's where America's pal and potential Reform Party candidate Buddy Roemer serves as an object-example-slash-cautionary-tale.

Roemer's whole candidacy is centered around one very good idea: there is too much money in politics, and it leads to all sorts of corruption. Why didn't that good idea sell? Because Buddy Roemer couldn't raise a billion dollars to promote it!

That's too bad, because hardly any of the money spent by super PACs will go to "promoting interesting or worthwhile ideas." Instead, the bulk of it will be used to spin the Eternal Wheel Of Perpetual Bullshit -- some will be spent to inject sleazy or dumb nonsense into the news cycle and some will be spent to inject a rebuttal to the previously injected sleazy or dumb nonsense into the news cycle. Of course, both sides are going to be working with huge sums of money, so the overall effect should be pretty much as Jamelle Bouie describes it -- a wash in which "the marginal effect of a few million here or there is small." So fret not: your "side" is not likely to lose the election just because the other side has a lot of money.

Of course, there's one way that all this money could decide an election -- someone might do something stupid or, as Sen. John McCain occasionally frets, scandalous with it. We got a preview of coming attractions a few weeks ago when The New York Times unearthed a proposed super PAC campaign to revive the zombie corpse of Rev. Jeremiah Wright and send it shambling across the landscape. The revelation of this proposal got reasonable conservatives -- who sort of hope to make 2012 a simple referendum on the Obama administration's first term, as opposed to a relitigation of dead issues from 2007 -- kvetching, and those who were set to participate in the proposed campaign repudiated it within hours of the Times story's publication. This included Joe Ricketts of TD Ameritrade, the campaign's ostensible funder, who "distanced himself" from the idea altogether.

The whole episode was pretty instructive, as Matt Yglesias pointed out:

Businesspeople make donations to support the re-election of politicians who are friendly to their interests and to broadly maintain privileged access to legislators who they may call on for specific favors. But the kind of spending Ricketts is contemplating here is simply too large to be driven by a narrow calculation of profit and loss. It only makes sense for Ricketts to cut that check if the campaign it underwrites has a lot of expressive value for Ricketts personally. And while I don't know any objective observers who think a focus on Jeremiah Wright is damaging to the president (it's hard to sow doubts about someone who's been in office for four years and every day the campaign isn't focused on mass unemployment is a win for an incumbent running amidst mass unemployment), it's obvious that a lot of hard-core Republicans do think this way.

If you're Fred Davis or any other consultant eager to help himself to a slice of Ricketts' $10 million investment, coming up with a cost-effective plan for damaging Obama's re-election campaign is pointless. What you want to do is come up with a plan that appeals to Ricketts' sensibilities and makes him want to spend the money. 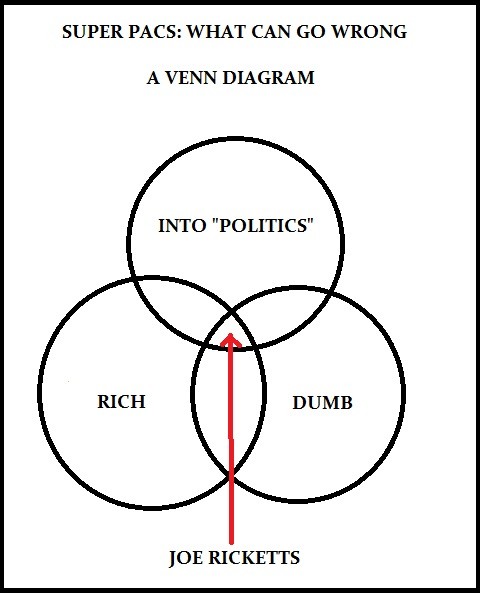 If the big money battle shapes up to be a total wash, eventually something is going to give and somebody is likely to try to gamble on a crazy bankshot that could backfire. And when it does, that "rule" against "coordination" that's supposed to immunize the candidate from their supporters' sleazy tendencies is going to prove to be an Achilles heel. When might something like this happen? Well, consider the fact that Romney's big Birther surrogate, Donald Trump, wants to have a super PAC of his own. If I were Romney, I'd be telling Trump, "Please, no, do not do this." But then, that would be breaking the law!

Of course, we could get through this election cycle without McCain's worst fears being realized. Nevertheless, it's best to imagine all of this money being spent on building a relentless hose of sewage that will make us feel terrible about the state of our political discourse, regardless of whether or not it creates a political cost for some of the participants.