Do you want to throw your remote at the TV when a political ad, especially one sponsored by a super PAC, interrupts your sacred "Breaking Bad" time to bombard you with partisan, distorted messages? Well, put your clicker down, because there's a better way to channel your frustration.

While many are unhappy with influence of super PACs in this election cycle, there's a bevy of websites and apps that techies have put together to help average voters uncover who's funding which groups and to learn who's really speaking in the ads. This is ordinarily a tough task, due the Supreme Court's 2010 Citizens United ruling, which lets corporations and unions donate unlimited funds to super PACs, organizations nominally unaffiliated with any campaign. While the ruling requires ads to say which group is sponsoring them, the super PACs themselves often use legal loopholes to obscure who’s funding them.

But now it's easier to track those dollars to the source.

When the TV starts blaring that foreboding attack-ad music, whip out your iPhone or Android device and load up one of two apps that will tell you a thing or two about the ads you’re watching. They're Ad Hawk, by the Sunlight Foundation, and Super PAC App, by Glassy Media. Both were released in August.

Both essentially do the same thing: They listen to the ad’s audio and identify it within their databases. Each app gives you the essentials about the super PAC (or other organization) funding the ad -- how much money it's taken in overall, how much it's spent overall, and whether it supports Democrats or Republicans. For those looking for a brief description of an ad, Ad Hawk’s app offers that. For those looking to use social tools to weigh in on the ad and watch related ads, Super PAC App will do that. The latter also links to sites that include PolitiFact and FactCheck to verify claims made in ads.

Even with that limited information, it’s useful knowing that an ad is being made by an outside group and not a candidate's campaign.

“It’s hard to tell the difference between an ad produced by a candidate and an ad produced by a super PAC,” Jennifer Hollett, co-founder of Glassy Media, which made Super PAC App, explained over the phone. “You start seeing who’s behind the ads and how much money there is, and people are surprised.”

Of course, there are limitations to mobile apps and the small screens they’re displayed on. To dip deeper into which specific donors fund your favorite (or not-so-favorite) ads, there are more robust resources on the Web.

The best is the online database at OpenSecrets.org, run by the nonprofit Center for Responsive Politics. Here, you can type in the name of a super PAC and see not only a list of expenditures for each super PAC (a TV ad for Obama here, an Internet ad against Romney there ...) but more importantly, a list of every donor who's contributed to a group (for the most part; more on that later).

Though less comprehensive, ProPublica’s website PAC Track offers a visually stunning display of donation information. Here, we see a list of the top super PAC donors overall (it’s casino mogul Sheldon Adelson) and here we see a graphical breakdown of the backers of the biggest super PACs. For example, this is who funds Republican Karl Rove's American Crossroads: 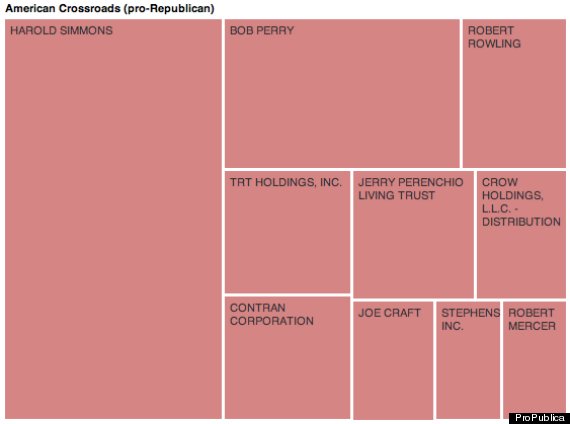 Nevertheless, donors have found ways to give anonymously to super PACs. As executive director of OpenSecrets.org Sheila Krumholz explained, while super PACs must disclose donors, the donors themselves can be 501(c)(4) nonprofit organizations that do not have to disclose sources of funding. This means that rich guys who wants to back a super PAC but still keep his name hidden can just donate to a nonprofit that will in turn hand the money over to the super PACs.

“What’s seriously lacking in the current disclosure regime is who the individual donors are,” Krumholz said over the phone. “This is information important now so people can make informed decisions about the credibility of an ad.”

So littering OpenSecret.org’s lists of donors are the names of nonprofits whose funders remain hidden until the organizations file their taxes. Ultimately these tools get their information from the Federal Election Commission. Until the disclosure loopholes created by the Supreme Court are fixed, there isn't much an app can to show every dollar donated to a super PAC.

Super PACs Spending: Tech Tools That Help You To See Who's Funding Whom
Donors Giving $500,000-Plus To Super PACs

1 / 208
Sheldon Adelson And Family (R)
Sheldon Adelson, the Las Vegas casino magnate, and his family have combined to give $53.69 million to super PACs in the 2012 election cycle. At first, Adelson pumped money into Winning Our Future, the super PAC supporting Newt Gingrich, but now he is funding groups backing Mitt Romney and congressional Republicans. Adelson is ranked on the <em>Forbes</em> list of the richest Americans at number eight, with $21.5 billion in net worth. Sheldon Adelson and his wife, Miriam, gave $15 million to Winning Our Future. His daughters Sivan Ochshorn and Shelley Maye Adelson each chipped in $500,000. Another daughter and her husband each gave $250,000. Adelson and his wife have also given $20 million to Restore Our Future (supporting Romney), $5 million to Congressional Leadership Fund, $5 million to YG Action Fund, $2 million to Freedom PAC (supporting Connie Mack), $1.5 million to Independence Virginia PAC (supporting George Allen), $1 million to Ending Spending Action Fund, $1 million to Treasure Coast Jobs Coalition, $1 million to Patriot Prosperity PAC (supporting Shmuley Boteach for Congress) and $250,000 to Conservative Renewal PAC, $250,000 to Texas Conservatives Fund (both supporting David Dewhurst) and $190,000 to Hispanic Leadership Fund. Adelson remained in the number one spot among super PAC donors after counting contributions for August. He has allegedly <a href="https://www.huffpost.com/entry/sheldon-adelson-to-lavish_n_1600149">given in excess of $70 million</a> when contributions to non-profit groups like Americans for Prosperity and the Republican Jewish Coalition are included. His involvement in politics revolves around his support for the state of Israel, <a href="https://www.huffpost.com/entry/sheldon-adelson-newt-gingrich-israel_n_1195867" target="_hplink">in particular the policies of Prime Minister Benjamin Netanyahu</a>. His business, along with that of other super PAC donors, <a href="https://www.huffpost.com/entry/sheldon-adelson-bribery-super-pac-donors-fcpa_n_1602694" target="_hplink">is also under investigation</a> for violations of the Foreign Corrupt Practices Act.
Getty