Creating your own planetary system is fun -- really fun.

University of Texas astronomer Dr. Stefano Meschiari found that out when he created "Super Planet Crash." Yes, the online game is addictive -- one player commented it's "a great little time waster."

Yet the game, which lets you place planets around a star to build your own solar system, is more than a plaything. It gives a pretty accurate representation of the physics that underlies planetary systems because it uses the same software code, called Systemic Console, that Meschiari developed to help astronomers tease out exoplanet signals from raw data. 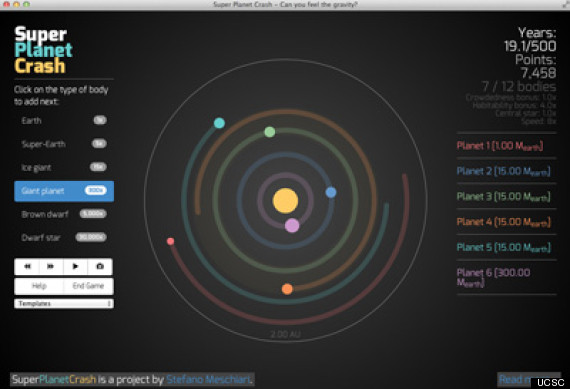 This screenshot from the online game Super Planet Crash shows a six-planet system.

"Systemic Console is open-source software that we've made available for other scientists to use," Dr. Greg Laughlin, a former professor of Meschiari's who chairs the department of astronomy and astrophysics at the University of California, Santa Cruz, said in a written statement. "But we also wanted to create a portal for students and teachers so that anyone can use it. For the online version, Stefano tuned the software to make it more accessible, and then he went even further with Super Planet Crash, which makes the ideas behind planetary systems accessible at the most visceral level."

Meschiari told The Huffington Post in an email that he knew he had created a good game when both his astronomy colleagues and his nonscientist friends were hooked on playing it.

"The most basic lesson to draw from the game is an intuitive understanding of how gravity works -- massive bodies are attracted to each other and modify their orbits accordingly," Meschiari said in the email. "Then users can learn that the more massive the object, the stronger the pull of gravity -- put a lot of massive bodies in the planetary system, and it rapidly becomes unstable. Alternatively, planets packed too tightly together will become rapidly unstable. The point structure challenges you to put as many massive planets as possible and try to keep the system teetering at the edge of instability. It's fun to watch a system that seems stable for centuries suddenly start to go unstable and eject a planet!"