Since 1969, Big Bird, Elmo and the whole gang of "Sesame Street" have been teaching the world that learning can be fun. The iconic puppets and their human friends were the first, on such a scale, to bring the magic of the alphabet and other elementary facets of education out of the classroom and into our living rooms. Now, a new clique of colorful puppets, called Super Sprowtz, are on the scene with a similar but more specific mission: To make vegetables cool.

Colby Carrot, Brian Broccoli, Erica Eggplant and a bundle of other veggie characters host the web series "Super Sprowtz Raw," which, as it self-declares, is more than just a cooking show. Along with a Brooklynite human named Roger, the vibrant characters teach their young viewers they can "eat their superpowers," and develop virtues like super strength, super smarts and super sight. A new episode, each of which run between nine and 11 minutes, airs every Thursday on YouTube. 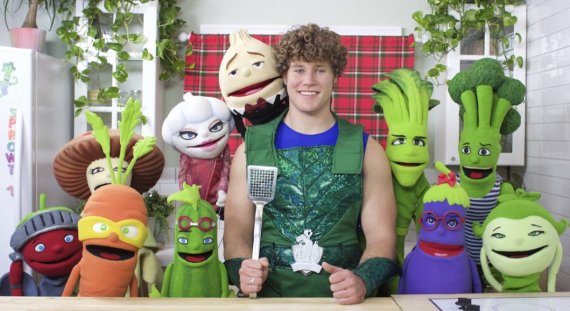 Radha Agrawal first envisioned vegetables as super heroes when she and her twin sister opened Wild, a gluten-free pizzeria. She noticed veggie-free pizzas were a favorite among her youngest customers. Agrawal experimented: She personified the vegetables and gave them stories. She animatedly explained how eating eggplant could make you smart and adding a little broccoli to your pizza pie could help make your muscles stronger. The children bit, chewed and swallowed her approach.

The rest is history. Agrawal brought her characters to life and soon introduced them to kids in school auditoriums, lunch rooms, classrooms and, most recently online. The web series isn't an exaggerated ploy to make parents believe their children are watching something "educational." Her research shows that the characterization of vegetables effectively promotes children's' consumption of them.

In 2013, in collaboration with Cornell University’s Center for Behavioral Economics in Child Nutrition Programs (B.E.N. Center), Super Sprowtz launched a study across all five boroughs of New York City in 10 public elementary schools. The study evaluated 7,500 students across the urban school districts to specifically test whether or not media in the cafeteria would increase student salad selection. The cafeteria salad bars were covered with the same, colorful display of the Super Sprowtz cast. TV monitors were set up to run short clips of the super hero veggies. 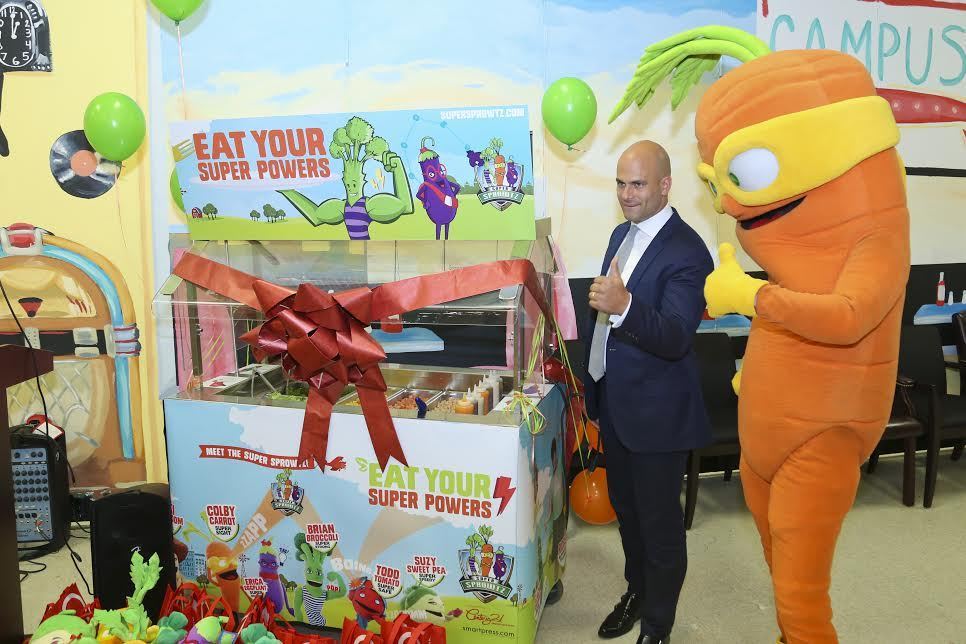 The findings were remarkable: There was more than a 250 percent increase of salad bar visits among students in just seven weeks. The pilot test was such a success that the New York City Department of Education aims to install the Super Sprowtz salad bar in all 1,300 of the city's elementary schools, reaching 1.1 million students every day. And it's happening: In October 2014, the salad bar furnished 120 of the city's schools. The program is reaching kids outside of New York, too. All 22 public elementary schools in Compton, Los Angeles will soon institute an entire Super Sprowtz salad bar program. At the end of 2014, 120 public schools in Puerto Rico public schools were provided with a translated version of the Super Sprowtz classroom curriculum, with a goal to expand to 3,000 classrooms across the country.

As obesity continues to rise in the United States, nutrition and health have also grown as a national concern. Agrawal argues that teaching children about healthy eating from an early age is part of the solution. "I think [food and nutrition education] is the number one subject we should instill in children," she told The Huffington Post over the phone. She believes that how we fuel our body drastically impacts the way we learn, and without being supplied the proper information to fuel our bodies correctly, our learning capacity will be hindered. Agrawal described a sugar high as "debilitating," but still witnesses teachers rewarding their students with cupcakes. The irony is confusing.

The Super Sprowtz educational tactics are similar to the ones used on "Sesame Street." As Malcolm Gladwell wrote in The Tipping Point, "Sesame Street was built around a single, breakthrough insight: that if you can hold the attention of children, you can educate them." "Super Sprowtz Raw" engages its viewers by attributing entertaining voices and dance moves to the food kids were once used to pushing to the side of their plates. The Sprowtz certainly work to incorporate popular culture into their schtick in an effort to relate to the kids. Take "All The Veggie Ladies," for example:

Also similar to the "Sesame Street" model, the "Super Sprowtz Raw" web series hosts an array of special guests to reach a wider demographic. The former White House chef, Shaquille O'Neal and Russell Simmons all appear in the first season.

Russell Simmons, Kevin Connoly and Shaquille O'Neal all appear on the first season of "Super Sprowtz Raw," reeling in viewers of all ages.

First Lady Michelle Obama, who has advocated healthier eating for kids since moving into the White House, is a fan of the heroic vegetables. In 2014 Obama joined the Super Sprowtz team for a live show at a Maryland preschool, and danced along with Erica Eggplant and the crew. 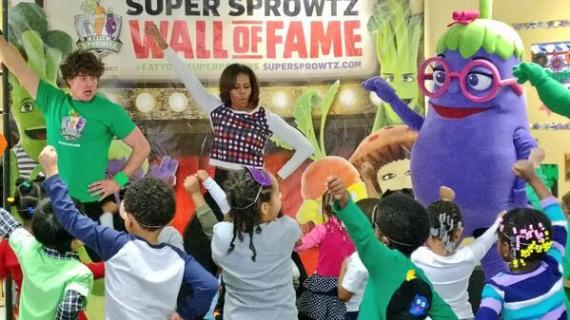 Even without government funding, schools and families across the world have the opportunity to incorporate food education in their classrooms and homes with the web series. "The millennial mom and her children are watching more and more programs online," Agrawal said, explaining that the future of children's entertainment is on the web. "It gives teachers the support they need," Agrawal said. "They can feel good about inspiring and educating them with a show while entertaining them at the same time." Plus, when the kids are revved up, they can go back home and watch their mighty vegetables at home with their parents all over again.

You can watch the first episode of "Super Sprowtz Raw" below.