WASHINGTON -- With all eyes focused on the closest Super Tuesday Republican primaries, such as those in Ohio and Tennessee, the most critical states for the all-important race for delegates may instead be Virginia, Massachusetts and Idaho -- states that receive relatively little attention but could provide Mitt Romney with a huge boost in convention delegates.

The delegate count of the Associated Press (reported in the HuffPost Election Dashboard) currently gives Mitt Romney 203 delegates, Rick Santorum 92, Newt Gingrich 33 and Ron Paul 25. But that count includes the AP's attempt to estimate the eventual delegate splits in caucus states (which often lack formal allocation rules) and any commitments made by officially unpledged "Automatic Delegates." The official delegate count of the Republican National Committee, which makes no attempt to estimate automatic delegates or many caucus state delegates, shows a lower total for all candidates. But either way, former Massachusetts Gov. Romney enjoys a current delegate lead of just over 100 delegates. 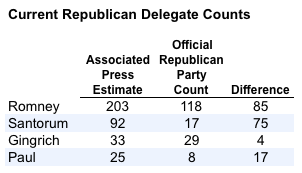 Which states have the greatest potential to alter that delegate count? The three that are likely to make the biggest difference in the delegate count tonight are those receiving the least media attention: Virginia, Idaho and Massachusetts.

Virginia -- Virginia will likely provide Romney with a big delegate victory on Tuesday for two reasons: First, former House Speaker Gingrich (R-Ga.) and former Sen. Santorum (R-Pa.) failed to qualify for the Virginia ballot. Second, Virginia awards the 33 congressional district delegates on a winner-take-all basis in each district and will also award all 13 at-large delegates to the winner if that candidate receives more than 50 percent of the statewide vote.

Four different polls conducted in Virginia in the past month show Romney leading Rep. Ron Paul (R-Texas) -- the only other GOP candidate to qualify for the ballot -- with between 53 and 69 percent of the vote (the HuffPost Pollster chart estimate for Romney is 62 percent). More importantly, the NBC News/Marist College poll shows very little geographic variation in Romney's lead. As such, Romney is likely to win all of the 46 delegates up for grabs in Virginia.

Massachusetts -- Mitt Romney's current home state will allocate its 38 pledged delegates on a proportional basis to any candidate that receives at least 15 percent of the statewide vote. Unfortunately, we have little polling to consider in Massachusetts, but an opt-in Internet survey conducted by YouGov last week gave Romney nearly two-thirds of the vote (64 percent), followed by Santorum (21 percent), Paul (9 percent) and Gingrich (6 percent).

If those results hold up on Tuesday, neither Paul nor Gingrich would win any Massachusetts delegates, while Romney would win 29 and Santorum 9.

Idaho -- Idaho is one of the few Republican caucus states with formal rules for delegate apportionment, the most important of which is that if a candidate can win more than 50 percent of the county-level delegates, he will be allotted all of Idaho's 32 delegates. While we have no polling for Idaho's likely caucus participants, Romney's prospects are likely boosted by the fact that Idaho has the second-largest population of Mormons (19.3 percent) in the United States, according to Gallup. Some of the biggest wins for Romney, who is Mormon, have come in Western states with Mormon populations that are not quite as large, according to Gallup's estimates, including Nevada (5.1 percent), Arizona (5.5 percent) and Wyoming (10.1 percent).

What all of this means is that if everything goes Romney's way on Tuesday, these three states alone could add almost a hundred delegates to his lead over Santorum.

Where could Santorum make up that margin and cut into Romney's lead? Not likely in Ohio, even if Santorum ekes out a narrow win. Ohio will allocate its 48 congressional district delegates on a winner-take-all basis within each district, and uses a proportional allocation for its 15 at-large delegates. The close nature of the race statewide means the candidates are likely to split the state's delegates. Santorum's task is made even harder by his failure to qualify for any delegates in three of Ohio's 16 congressional districts, and by his failure to fill delegate slates in six more, leaving him potentially ineligible for 18 of Ohio's 63 pledged delegates on Tuesday.

Other states where Santorum continued to lead narrowly in late polling, such as Oklahoma and Tennessee, are unlikely to give Santorum big delegate margins. The rules in those states allocate delegates on what amounts to a semi-proportional basis. Those rules will prevent the winner from running up big delegate gains, especially when no candidate receives more than 50 percent of the vote within individual congressional districts, as seems highly likely in both states.

Gingrich may be poised to win a big chunk of Georgia's 73 pledged delegates, the biggest delegation up for grabs on Tuesday. Georgia will allocate its 42 congressional district delegates on a winner-take-all basis, provided the winner receives a majority of the district's vote. With Gingrich's statewide total approaching 50 percent of the vote there, he may pick up all three delegates in many districts.

The number of pledged delegates up for grabs in the remaining states, Alaska (24 pledged delegates), North Dakota (23) and Vermont (14), is relatively small. While Santorum could surprise in the Alaska and North Dakota caucuses, as he did in last month's Colorado and Minnesota caucuses, the delegate totals are relatively small. Meanwhile, given its proximity to Romney-friendly Massachusetts and New Hampshire, Vermont is likely to hand Romney another victory.

As Nate Silver noted on Sunday, the delegate math adds up to "the makings of a strong evening" for Mitt Romney on Tuesday, given his big advantages in states like Virginia, Massachusetts and Idaho, along with his ability to remain competitive for delegates in almost every other state.

Thus, the most critical factor in accumulating delegates on Super Tuesday may be less about winning any particular state than about the ability to compete in all of them.