The timing is tragically ironic. As Super Typhoon Haiyan -- one of the strongest storms ever recorded -- smashes into the Philippines, sending millions fleeing for safety, negotiators from around the world are beginning to arrive in Warsaw, Poland for the latest installment of the United Nations Climate Talks, COP 19.

Climate change is loading the dice for extreme weather events like Haiyan. The storms strength and rapid development have been aided by unusually warm ocean waters and warm, moist air (warm air holds more water vapor than cold). Global warming also causes sea level rise, increasing the risk of flooding from storm surges, especially in low-lying areas like much of the Philippines. Carbon dioxide is the steroids that leads to grand-slam storms like Haiyan.

Haiyan should be a five-alarm wake up call for negotiators in Warsaw and the capitals that sent them here. Over the next two-weeks, despite the best attempts of the nations most vulnerable to climate change, negotiators from the largest emitting countries will bask under the fluorescent lights of yet another conference center to bicker, delay, and obfuscate. Meanwhile, millions of people in the Philippines -- and other impacted communities around the world -- will be sleeping in relief centers and bravely trying to rebuild their homes.

The United Nations tried to make this year's climate meeting a summit focused on finance, but the Green Climate Fund, which is supposed to provide $100 billion every year by 2020 for adaptation and mitigation efforts, remains empty, and there's no sign that rich countries will come to the table in Warsaw with any serious pledges.

Instead, the Polish government has turned this year's Conference of the Parties into the "Coal COP," going so far as to host a World Coal Summit next-door to the official climate negotiations. It's like throwing a tobacco industry expo next-door to a global meeting of cancer experts. It's the gun show next to a world peace summit.

Coal fired power plants are the largest source of greenhouse gas emission in the world, making coal the number one threat to the climate. If we want a future for the planet, there is no future for coal.

So far, Poland's attempts to promote the future of the coal industry at the climate summit has only cast more of a spotlight on the fragile state of the industry.

In the United States, coal demand has fallen by about 20 percent over the last five years, while environmental regulations in Europe will force the closure of many coal fired power plants over the next decade. The drop in demand has resulted in a similar drop in share price for many coal companies, sometimes by as much as 75 percent.

The situation for the industry will only get worse. According to a growing number of reports by institutions like the World Bank, HSBC, and the Intergovernmental Panel on Climate Change, 60-80 percent of current fossil fuel reserves must stay underground in order to limit global warming to below 2°C. Coal, and other high-carbon, unconventional fuels such as tar sands, are likely to be the hardest hit by the tightening carbon budget.

The threat of these reserves turning into stranded assets has led many investors to start shedding their coal industry stocks, and fueled fears of a carbon bubble resulting from the overvaluation of fossil fuel companies. The prices of some coal mining companies have plummeted 75 percent, many others have gone out of business. Meanwhile, the growing fossil fuel divestment campaign is continuing to turn up the heat on institutions to divest from the coal industry and other major-holders of fossil fuel reserves.

Climate activists in the Philippines are already making the connection between Haiyan and the need to end the global dependence on coal. In an interview with the Sun Star, Voltaire Alferez, the national coordinator for Aksyon Klima, a climate coalition in the Philippines, called on the government to start protecting communities rather than polluters.

"We challenge the Aquino administration to be more proactive in helping local governments and communities protect themselves from storm surges, heavy rains, floods, and more," Alferez said. "Aquino and his cohorts have also repeatedly defended its coal-centric policy while underestimating the country's capacity and readiness for renewable energy. If the proposed coal-fired power plants are approved, we are signing up for more emissions and more of this kind of extreme weather." 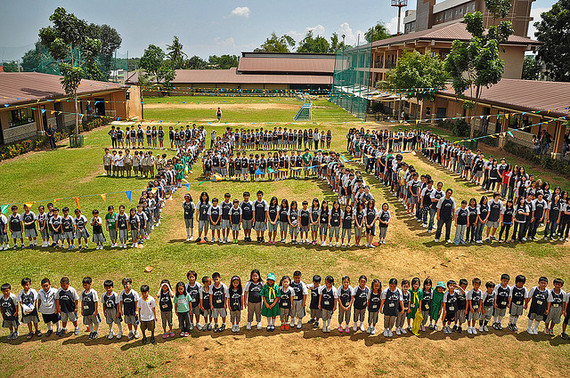 Students in Cebu, Philippines -- one of the places hardest hit by Haiyan -- form a 350 for an international day of climate action.

The test for any would-be climate leader here at the UN Climate Talks in Poland will be whether they are willing to stand up to the fossil fuel industry and tell them that the age of coal is over, and that it's time to start investing in the future. That's especially true for UN Climate Secretary Christiana Figueres, who is keynoting World Coal Conference.

I'm straining to give Figueres the benefit of the doubt--she spoke emotionally to hundreds of young people about the need for bold climate action at the Global Power Shift summit last summer, breaking into tears at one point. If she goes to the summit and calls for an end to the coal industry, it will be a powerful moment. If instead, she plays the politician and spouts off some lies about clean coal, it will be a slap in the face to every young person who believed in her -- and the millions of people in the Philippines who will still be recovering from Haiyan.

From Haiyan to Sandy to Bopha (another major storm that hit the Philippines last year), our so-called leaders have heard alarm after alarm and continued to hit the snooze button. It's time to kick them out of bed and demand action. Warsaw could be the start.