Super Typhoon Haiyan — which is one of the strongest storms in world history based on maximum windspeed — is about to plow through the Central Philippines, producing a potentially deadly storm surge and dumping heavy rainfall that could cause widespread flooding. The densely populated city of Manila, home to 12 million, is in the storm’s path, although it is predicted to escape the worst of the winds and storm surge. 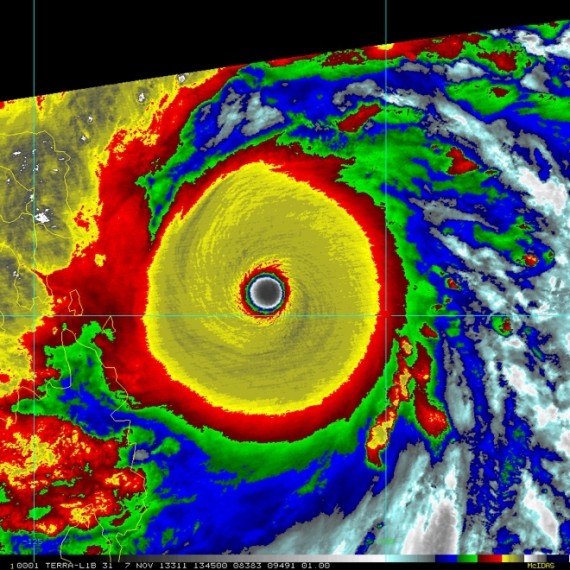 As of Thursday afternoon Eastern time, Haiyan, known in the Philippines as Super Typhoon Yolanda, had estimated maximum sustained winds of 195 mph with gusts above 220 mph, which puts the storm in extraordinarily rare territory. Since 1969, only three storms have had sustained winds close to this magnitude — Hurricane Camille in 1969, Super Typhoon Tip in 1979, and Hurricane Allen in 1980. No storm in the Atlantic has ever been stronger than Haiyan, according to The Weather Channel.

Haiyan is capable of causing catastrophic damage in the central Philippines and its outer bands are already starting to affect the island nation.

The U.S. Navy’s Joint Typhoon Warning Center forecasts that Haiyan will cross the Central Philippines as a Category 4 or 5 Super Typhoon, and then re-emerge over open water, before making landfall in Vietnam as a Category 3 typhoon on November 10.

Ryan Maue, a meteorologist at WeatherBELL Analytics, said that Haiyan appears to be the strongest storm since Super Typhoon Tip in 1979. Maue said the storm has avoided the typical hiccups that other intense storms encounter, such as eyewall replacement cycles, during which a storm's inner core undergoes a reorganization. Such cycles can cause a Category 5 storm to weaken to a Category 3 or 4 storm, before re-strengthening. Instead of doing this, though, Haiyan has remained at peak strength for more than 24 hours, which is unusual, and even strengthened on Monday morning.

After hitting the Leyte province, the Philippines’ Department of Science and Technology expects the storm to traverse the central Philippines from Biliran to Busuanga before passing into the West Philippine Sea. The Department is warning coastal residents to expect storm surges “which may reach up to 7-meter (23 feet) wave height,” along with flooding and mudslides. The storm poses an especially grave danger to the capital of Leyte, the city of Tacloban, which has about 220,000 people and lies along or just to the north of the storm's path where the most intense winds and storm surge will come ashore.

For the past 24 hours, the storm has remained at a strength close to the theoretical upper limit that cyclones can reach. Unlike in the tropical North Atlantic, there is no aircraft reconnaissance of tropical storms and typhoons in the Western Pacific, so the actual wind speeds and minimum central air pressure — two key parameters used to classify such storms — are being estimated using satellites. 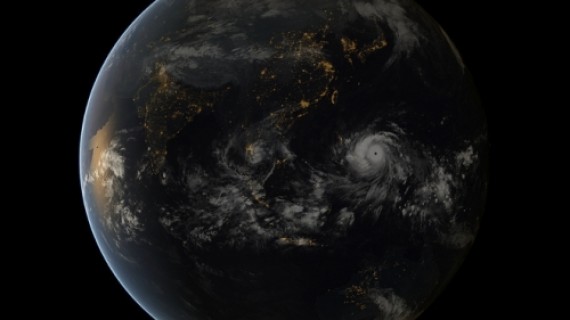 Storm surge forecasts from the Philippines’ Project NOAH indicate a maximum storm tide (storm surge plus the tide level) of 16.4 feet at Ormoc in Leyte Province on November 8, with 14-16 foot storm tides occurring in the provinces of Palawan, Quezon, Biliran, and others. The storm tide forecast for Manila is 5 feet, but the city is so low-lying that flooding may still occur there.

Sea level rise from global warming is escalating the risk posed by storm surges across the globe, including in low-lying areas of the Philippines.

Chia-Ying Lee, a researcher at Columbia University’s International Research Institute for Climate and Society, told Climate Central in an email that Haiyan’s moderate forward speed has prevented it from encountering the cooler ocean waters that its potent winds are stirring up from deep below the ocean's surface, which would have weakened the storm.

Lee said there have been 9 years that have had more than three super typhoons in the Western Pacific Ocean (equivalent to Category 4 and 5 hurricanes) for the period from 2002-2012. “So actually, having 3 or more super typhoons is quite common, at least in the last decade.”

Lee said that Haiyan is unique in that it reached Category 5 strength at a very southern latitude, although it did not set a record for this. “. . . In general, a storm’s movement has a northward component, (so) the longer it takes for the storm to reach Category 4 or 5, the further north it gets. For Haiyan, it went through a rapid intensification process and has not actually experienced any weakening stage, while lots of storms experienced ups and downs before reaching such a strong stage,” she said.

Based on an index, known as Accumulated Cyclone Energy or ACE, which incorporates the number, strength, and duration of all the tropical storms in a season, the Western Pacific has had a slightly below-average storm season, although it has been closing the gap recently.

Meanwhile, the Atlantic has not had a Category 5 storm since Hurricane Felix in 1997, according to Jeff Masters of Weather Underground, and the U.S. has not had a landfalling major hurricane of Category 3 or greater since 2005, a record span. The North Atlantic Hurricane Season had an ACE index that is just 29 percent of normal to date, with just 12 named storms, two of which have been hurricanes.

Even more so than Florida is in the U.S., the Philippines are a tropical storm magnet. Haiyan will be the fourth typhoon to hit the Philippines this year alone, but the storms normally hit the northern islands, rather than the central and southern regions that Haiyan is targeting.

Last year, Super Typhoon Bopha hit the southern Philippine island of Mindanao, killing close to 2,000, and Haiyan may be the strongest storm ever to strike the Philippines.

Climate scientists continue to search for insight into how manmade global warming, which is increasing sea surface temperatures along with changing air temperatures and the amount of moisture in the air, may be altering tropical storm systems like Haiyan. The most recent report from the U.N. Intergovernmental Panel for Climate Change (IPCC) found that “it is virtually certain that the frequency and intensity of the strongest tropical cyclones in the North Atlantic has increased since the 1970s,” but that there is less evidence of changes being detected in other ocean basins.

Sparse historical data of Pacific storms has made it more difficult for scientists to detect long-term changes to storms in that region, but in the Atlantic at least, global warming is expected to increase the prevalance of the strongest storms, while making storms produce more rainfall. However, the total number of storms in the Atlantic is projected to decrease as the climate continues to warm. The same may or may not hold true in the Western Pacific.