If you had any doubt that sports and social media go hand in hand, this week's Super Bowl XLVI should have convinced you. The Giants took the win in an exciting down-to-the-wire victory, but the social media community (and fans of the teams in particular) didn't stop raving to their networks throughout the event, and even before. In fact, the 2012 Superbowl set a number of records! Let's take a look at how it happened, and what it means for successful sports brands.

The showdown between the New York Giants and the New England Patriots shattered two new records set for the number of tweets per second (TPS). Madonna's halftime performance, which generated 10,245 TPS, shattered the first record; by the end of the game Twitter recorded a new high of 12,233 TPS. Additionally, according to the New York Times, there was over 15 million Superbowl-related tweets in 2012, compared to just about three million last year (also a record year, at the time).

Twitter wasn't the only spot online that received the attention of highly active fans and viewers.
Google reports
that the top searches during the game were:

Moreover, users were actively engaged in Super Bowl planning in the days leading up to the gamel. Google reported a 10.4x increase in searches for "seven-layer dip" and a 23x increase in searches for "super bowl recipe" in the week before the game. This increased attention to game-day activities points to a great opportunity for brands to stay aware of pre-event hype. There are countless opportunities for brands to release compelling content that is top-of-mind for fans, whether they update with messaging related to common themes like food for the party, which team the fans are rooting for, what the opinions might be about the halftime show, or even commentary about TV programming around the event (around which Youtube is hosting an entire social campaign, AdBlitz).

In the time period after the AFC and NFC championship games, the Patriots posted more to their Facebook page (approximately 6 times per day on average) than the Giants did (5 times per day). Normalizing for fan count and post frequency, however, the Giants were 5% more effective at getting "likes" and comments on the posts within their page.

Additionally, in the week leading up to the SuperBowl, the Giants concentrated on acquiring new fans by asking their existing fan base to bring them in. They did this with a Wildfire promotion wherein the Giants would reveal a new and exclusive video, filmed by defensive end David Tollefson with the "Tollycam," if the page scored 10,000 new fans each day. The promotion encouraged fans that wanted to see the new content to get others to "like" the Giants. The Patriots asked people to like their page as well -- however, they didn't create an express incentive (like a "video giveaway") to do it. The video giveaway promotion led the Giants to an 86% faster fan page growth rate than the Patriots page growth (controlling for the spike in fans that occurred during and after the Giants won the game). 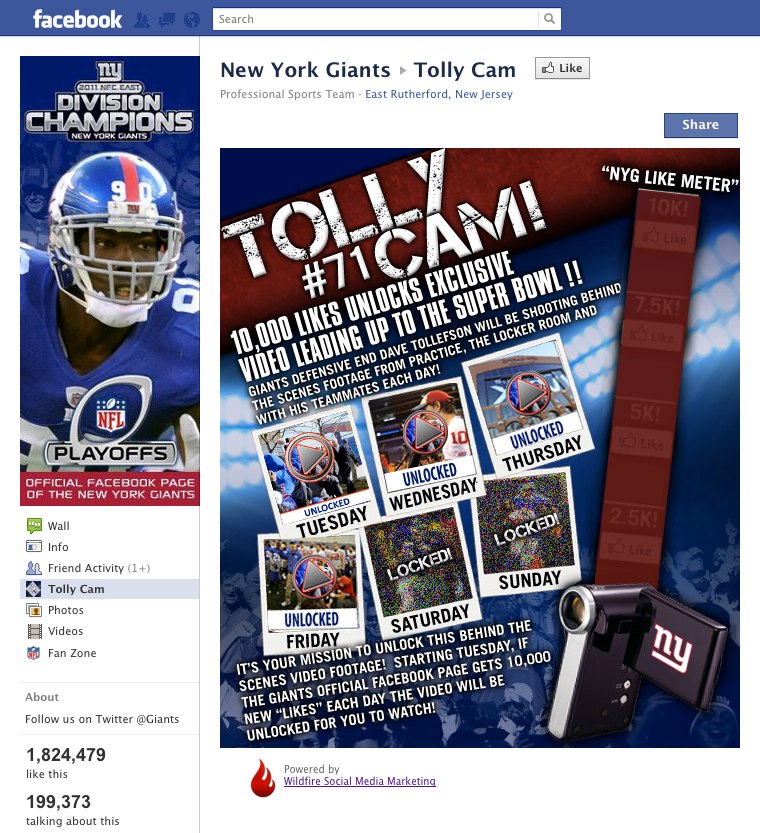 At this point, its a given that the day of any big event like the Superbowl, fans and viewers all over the country will be "talking" their fingers off through varied social media channels. Brands that are most successful at garnering buzz before and after game day are the ones that are most forward thinking in their marketing strategy leading up to a big game. Asking for a "Like" for likes sake is no longer enough to entice fans to spread the word about a brand to their friends -- providing a worthwhile incentive gets the ball rolling at a much faster rate. Likewise the incentive need not involve a material giveaway -- so long as the fans are getting compelling and exclusive entertainment.

What was your favorite part of the Superbowl? Were you more immersed in watching the half-time act or tweeting about it? Share your thoughts in the comments below, we'd love to hear from you!