A new analysis of data collected by federal scientists suggests that a shockingly-high percentage of meat sold in U.S. supermarkets is contaminated with antibiotic-resistant bacteria.

These microbes are superbug versions of pathogens that, even in their milder forms, have devastating potential, including salmonella, E. coli and Campylobacter jejuni. The EWG report also pointed to other studies that suggest there are concerning levels of pathogens such as Yersinia enterocolitica and Staphylococcus aureus in meat. 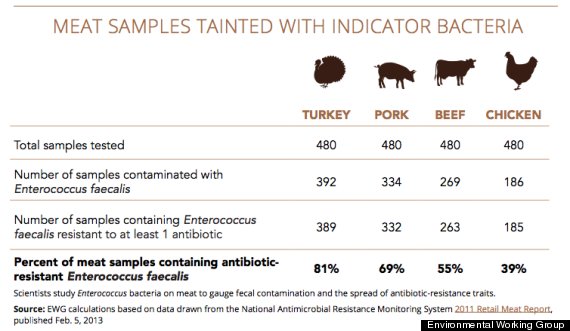 In an agency press release, EWG nutritionist and the report's lead researcher, Dawn Undurraga, issued a warning to the public:

“Consumers should be very concerned that antibiotic-resistant bacteria are now common in the meat aisles of most American supermarkets ... These organisms can cause foodborne illnesses and other infections. Worse, they spread antibiotic-resistance, which threatens to bring on a post-antibiotic era where important medicines critical to treating people could become ineffective.”

The rate at which these superbugs are spreading is particularly alarming. In 2002, 50 percent of salmonella microbes found in raw chicken were antibiotic-resistant, according to EWG research which draws from government data. In 2011 samples, that number increased to 74 percent. 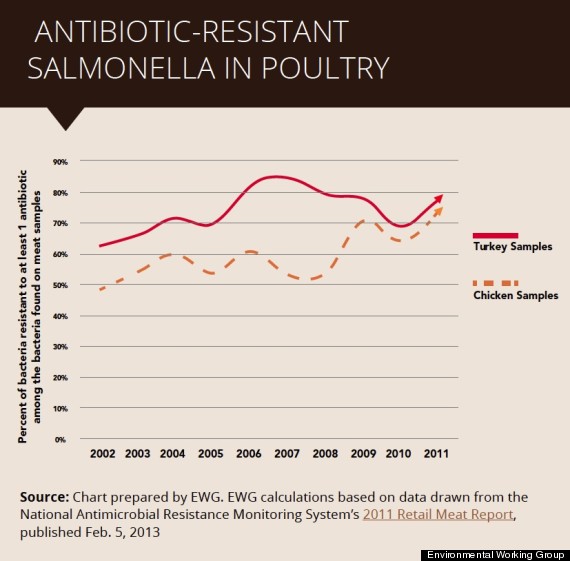 Experts at EWG say that the boom in superbugs is directly related to the increased use of antibiotics by factory farms. The report writes that industrial livestock producers "routinely dose their animals with pharmaceuticals, mostly administered with limited veterinary oversight and frequently without prescriptions, to encourage faster growth or prevent infection in crowded, stressful and often unsanitary living conditions."

But the FDA, which manages NARMS alongside the USDA and CDC, objected to EWG's analysis in an email to The Huffington Post. "While we are always concerned when we see antimicrobial resistance, we believe the EWG report oversimplifies the NARMS data," said FDA press officer Jalil Isa.

Isa said the numbers are misleading, and that the EWG report cites some pathogens that don't lead to food-borne illnesses and have resistance to uncommonly-used antibiotics. "[I]t is alarmist to imply that pathogens resistant to one, or even a few, antimicrobials should be called 'superbugs,'" he said. "If these same bacteria are still treatable by other commonly used antibiotics."

It's long been known that overuse of antibiotics in humans can lead to antibiotic resistance -- the Mayo Clinic warns that it can lead to more difficult-to-treat infections, longer-lasting illnesses that can include hospital stays and the use of more expensive and potentially toxic medications -- and EWG posits that this is happening now in livestock. When humans consume the animals' meat, the superbug pathogens can be passed along as well.

According to the EWG report, about 30 million pounds of antibiotics were used on domestic livestock in 2011 -- an increase of about 22 percent from 2005 sales by weight. At present, antibiotics used for livestock account for about 80 percent of the American antibiotics market, which, the EWG believes, gives the pharmaceutical industry a financial incentive to promote them.

UPDATE 4/21: This post has been updated to include comments from the FDA.

PHOTO GALLERY
Kinds Of Food Poisoning You Should Know About (And Avoid)
Voting Made Easy
Register to vote and apply for an absentee ballot today
Register now
Rachel Tepper
Associate Editor, HuffPost Food
Suggest a correction

Antibiotic-Resistant Superbugs In Your Meat Are On The Rise: Report
Kinds Of Food Poisoning You Should Know About (And Avoid) 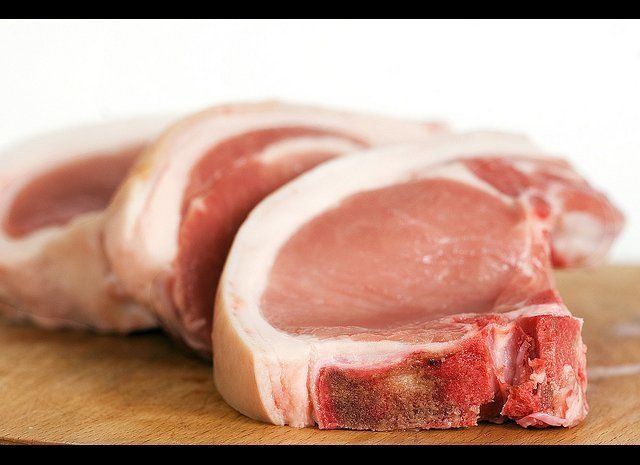