"Superfruit" is a term that is being used by marketers of late to classify fruits that have, in their view, exceptional nutrient and antioxidant qualities. Exotic fruits such as goji berries, acai and mangosteen are some of the select fruits that have earned this status. Marketers tout exotic superfruits as being able to do everything from boost energy to increase immunity and even improve mental function. Are superfruits really better for you than conventional fruits? 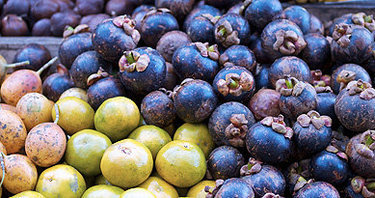 Nutritional Facts and Figures
Antioxidants are believed to play a very valuable role in the body. They stabilize molecules known as free radicals, which can cause damage to DNA and are likely the culprit in many diseases. While our cells make some antioxidants, plants contain thousands of antioxidants known as phytochemicals. Therefore, a diet rich in plant foods such as fruits and vegetables will help strengthen the body's natural defenses, making us healthier and less likely to develop disease. Exotic superfruits are marketed as being extremely rich in antioxidants. Antioxidant capacities of different foods are measured through a method known as oxygen radical absorbance capacity, or ORAC. Several procedural factors can influence ORAC tests, resulting in inconsistent results. In fact, when different labs do the same test they will sometimes come up with different numbers.

A Bit About Some of the Exotic Superfruits
Acai is a fruit that looks similar to a grape and is native to Central and South America. Acai is rich in polyunsaturated fats, dietary fiber, calcium, as well as antioxidants like Vitamin E, and certain phytochemicals know as anthocyanins. After harvest, acai berries deteriorate rapidly. Therefore, outside its native region, acai is generally seen as a powder in foods like granola, or sold as a supplement in capsule or juice form.

Goji berry, also known as wolfberry, is primarily grown in China and has long been a part of traditional Chinese medicine. Nutritionally, it has high concentrations of many vitamins and minerals, as well as phytochemicals such as beta-carotene, zeaxanthin, and lycopene. Goji berries are red-orange in color and look similar to raisins. They are generally sold as dried berries, and can be found in granola and trail mix, as well as in liquid form as a juice.

Mangosteen grows on tropical evergreen trees in Pacific tropics. While the fruit itself is unpigmented and therefore has low nutrient value, the rind is a deep, reddish purple color, which contains phytochemicals known as xanthones. Mangosteen is generally seen as a puree of the whole fruit in either juice or capsule form.

Antioxidant Measurement
A list of ORAC values published by the USDA contains measurements for several common fruits, but does not contain information on these popular exotic choices. This makes it extremely difficult to compare the antioxidant qualities of exotic superfruits to more common fruits like apples, blueberries, and bananas...just to name a few.

While not marketed as superfruits, conventional fruits also have powerful antioxidant properties. For example, apples are not only rich in fiber and potassium, but the peel of the apple contains polyphenols (cancer-fighting antioxidants) and quercetin (a flavonoid which has been shown to lower the risk of pancreatic cancer). Blueberries are not only great sources of fiber, vitamin C and manganese, but are also loaded in antioxidants such as anthocyanin, resveratrol, and flavonols. Lastly, bananas contain vitamins B6, potassium, and magnesium and have been linked to alleviating PMS and depression symptoms as well as decreasing blood pressure.

The Downside
The downside of the new exotic superfruits is that they must travel long distances to be consumed in the United States, making them more expensive and less environmentally friendly than local products. For example, while you could purchase a pound of apples for under $2, a pound of goji berries would cost closer to $10. Similarly, while it may cost over $15 for 32 ounces of mangosteen juice, the same amount of orange juice could sell for as little as $2.25. Also, importantly, since they have traveled long distances and/or have been processed, you are not consuming the exotic superfruits in their natural, fresh state--and so may get more benefits from just eating a fresh piece of conventional fruit from a farmer's market, farm, or even supermarket freezer section (if you read last week's bite!)

The bottom line is that all fruits and vegetables contain varying amounts of healthy compounds. Different antioxidants have unique effects, so it is more important to eat a wide variety of antioxidant containing foods than one food that is high in a specific phytochemical. In other words, it is really hard to know how "super" the exotic superfruits are from a food science perspective.

LIVESTRONG Nutritionist, Alyse Levine, Offers Advice
"Superfruit" is a marketing term as opposed to a scientific term. Therefore, rather than focusing on which fruits you are eating, just aim to increase and vary your overall fruit intake. Many fruits such as strawberries, blueberries, blackberries and oranges, which are not marketed as superfruits, also have exceptional antioxidant properties. Phytochemicals are found in pigments, so keeping your diet colorful will ensure that you are consuming a variety of antioxidants!

Learn more about Diet & Nutrition at LIVESTRONG.COM and track your food and fitness on MyPlate.

The Truth About Antioxidant Superfoods. Courtesy of LIVESTRONG.COM