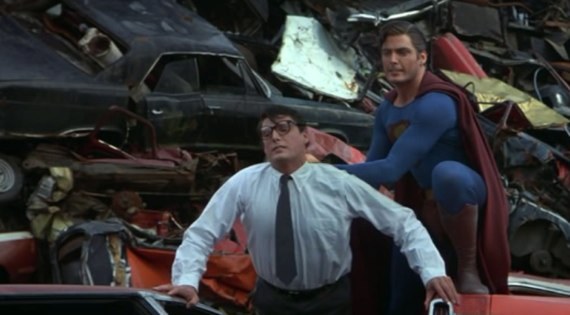 Superman III (which turns 30 years old on June 17) is the only Christopher Reeve Superman movie that I saw in a movie theater. Like any nine year old at his first Superman movie, I remember enjoying it very much. As a result, I've been afraid to re-watch Superman III ever since.

Time has not been kind to Superman III. The first film was epic. The second was fun. The third is neither. To be fair, it's not an absolute disaster, like Superman IV: The Quest for Peace. Superman III is basically the answer to the question "What would happen if we put Superman and Richard Pryor in the same movie?" Again, as a nine year old, I liked the answer to that question very much.

To mark the release of this weekend's Man of Steel -- and against my better judgment -- I decided to re-watch Superman III for the first time since 1983 and hopefully not destroy a little piece of my childhood in the process. Along the way, I've committed to keeping a running diary. So here we go. (Sorry, childhood memories.)

0:01:57 Gus Gorman is no longer eligible for unemployment benefits. I wish this were how all Superman villains were created.

0:02:32 Another thing I misremembered: I thought Gus was a computer genius to begin with, not someone who responds to advertisements on the back of matchbooks. I feel perhaps I should just turn this movie off right now.

0:02:55 The opening credits are already disappointing. Instead of swooping names from space over John Williams' score, we are watching Pamela Stephenson walk through Metropolis while slapstick pratfalls happen around her. Yes, I have made a poor decision.

0:03:54 A blind man thinks he's walking his dog, but instead he's walking a road-painting machine. I should remind you, this is happening during the opening credits of a Superman movie.

0:04:52 The blind man just walked into a tree and said, "Excuse me." At least he doesn't have to watch this movie for the next two hours.

0:06:57 For no reason whatsoever, an old man with a paint bucket on his head caused a gumball machine to topple over, causing a mime to fall down. Enough, already, Superman III, I get it -- the tone has been set.

0:07:14 The blind man is back and there's a large painting being carried across the street right in front of him. Shouldn't be too much of a surprise what happens here.

0:07:32 Clark Kent just pied a man in the face. Now the tone has officially been set.

0:08:29 We are back to Gus Gorman taking a computer class, and it turns out that he is a natural. Which is really hard to do on a DOS system, but he's doing it.

0:08:33 This should have been the plot to The Internship.

0:10:30 Clark is pitching a story to Perry White about returning for his high-school class reunion. I'm not sure how that's a "story," per se, but I think I would rather read that then watch the rest of this movie.

0:11:49 Lois just left for a Bermuda vacation. When this film was being written, I would like to have been a fly on the wall.

"So, how do we explain that Lois is barely in this movie?"

"How about a trip to the Bahamas?"

0:13:07 One of Gus' new co-workers is explaining the concept of the half cent. Little did this actor know that he's giving a plot idea to two movies.

0:14:31 Well, this is disappointing. It seems that all that the computer genius Gus Gorman had to do to steal the half cents was to type the words "channel half cents from all webscoe salaries into above expenses account." Let's try this ...

0:17:30 On the way to Smallville, Clark and Jimmy Olsen come across a chemical plant fire. I forgot how out-of-left-field this scene seems.

0:18:43 Superman has just been informed by a very calm scientist that the fire might cause an acid cloud.

0:22:50 Superman graduated high school in 1965. I guess this is the all-important 18-year high-school reunion?

0:24:10 Even in a sub-par Superman movie, Christopher Reeve is still really good.

0:25:10 Brad just made fun of the fact that Clark wears glasses. Honest question here: When did it go out of style to make fun of a person for having bad eyesight? I can't remember the last time I heard someone refer to someone as "four eyes." I feel it should be brought back ironically.

0:29:53 I have nothing against Robert Vaughn, but I'm not sure he should be on the shortlist of "potential Superman villains."

0:31:27 I get the sense that the makers of Superman III don't want you to know where this version of Smallville is located. First, Clark took a bus there from Metropolis. Second, there's a scene at a bowling alley and there is a kid wearing a Michigan T-shirt who is friends with a kid wearing a Baltimore Orioles shirt. In the background, there are pennants hanging on the wall for both Dallas and Oakland. So, that pretty much covers every region of the United States.

0:32:45 Clark Kent just sneezed a strike. I think I'm starting to remember why I liked this movie so much.

0:36:43 I completely forgot that this movie's plot centered on Colombian coffee beans.

0:38:50 For reasons that I don't completely understand, Gus Gorman is now in Smallville (wherever that may be). I think a weather satellite is involved.

0:40:53 I really like the fact that Clark's Smallville wardrobe includes a sweater tied around his neck.

0:45:15 Of course Brad is the maintenance man that Gus has to get past in order to pull off whatever it is he's trying to pull off. Sadly, Brad succumbs to the temptations of Gus' alcohol. I feel Brad's alcoholism is the real story of Superman III.

0:51:06 I am legitimately confused. Somehow, Gus using this computer in Smallville to cause havoc all over the world -- from messed-up traffic lights to a couple being overcharged for a cruise. (An added note: when the husband got the bill, he smashed a grapefruit into the face of his wife for reasons I don't quite understand. Then again, this movie featured a mime at one point.)

0:54:20 I do remember this skyscraper rooftop ski slope. Why hasn't anyone tried to emulate this set-up in the last 30 years?

0:58:45 Gus Gorman just skied right off the side of the building. Perhaps that answers my last question. If nothing else, Superman III is a cautionary tale about rooftop ski slopes.

1:02:20 Not only is Gus a computer genius, he also knows how to make his own almost, sorta Kryptonite.

1:04:43 I have to admit, I used to love the scene in which Gus pretended to be an Army general. I'm not sure I can still say that today.

1:05:48 I love how the whole purpose of this scheme is to present Superman with a gift that looks exactly like Kryptonite -- and Superman just says, "Thanks."

1:08:06 The effects of the sorta Kryptonite are starting to set in. I will admit, I still love "dick" Superman.

1:09:33 You know, the people of Smallville are kind of dicks, too. Superman arrives one minute late to a bridge accident, asks what he can do, then -- after all Superman has done in the past -- the local cop says, "Not much of anything now," in the most passive-aggressive tone imaginable.

01:12:33 Superman just blew out the Olympic torch for no reason other than spite. I really like dick-Superman.

1:18:43 I also love that Superman now has a five o'clock shadow and seems very interested in sex.

1:21:01 Superman is now acting very much like Don Draper, too. He just slept with Robert Vaughn's assistant. I completely forgot that happened.

1:22:38 So, the gist of this movie seems to be that Robert Vaughn wants to control the world's oil (which seems reasonable) and Gus Gorman wants Robert Vaughn to build him a super computer (which ... whatever).

1:24:35 I could watch Superman be a dick all day. He's just sitting at a bar, drunk, flicking peanuts and it's fascinating.

1:26:07 I'll say this: I might not want this version of Superman to have to rescue me if I were in trouble, but he is a much more interesting person.

1:27:13 OK, here we go: the infamous fight between Superman and Clark Kent in the junkyard. As a nine year old, I had many, many, many questions about this scene.

1:32:27 Superman has put Clark Kent into a machine that crushes cars. He has upped the ante since that whole "chicken" incident.

1:33:12 Clark Kent just choked Superman to death. Say what you want about the quality of Superman III, but that is still one really bizarre scene.

1:37:56 Gus' new "ultimate computer" has been revealed at the bottom of the Grand Canyon. I wish there were someone here to give me one of those "Your iPhone has 1,000 times the power of Gus Gorman's ultimate computer from Superman III" type facts.

1:39:37 My favorite thing so far: The ultimate computer, as it fires missiles at Superman, uses the music from the Atari 2600 Pac-Man cartridge. (I'm also a little sad that I know that particular piece of information.)

1:42:38 So, Superman is confronting the ultimate computer. It's also the first time that Superman has seen Robert Vaughn's assistant, Lorelei Ambrosia (Pamela Stephenson), since he slept with her back when he was dick-Superman. (I want to point out again: Superman slept with her!) Here, when Ambrosia says hello, Superman responds, "I don't know you, lady." When pressed further, Superman continues, "I'm sorry, but that wasn't me." Superman is Don Draper.

1:46:20 Gus just disabled the entire computer by removing a screw.

1:49:24 The computer just transformed Robert Vaughn's sister into a robot. I cannot stress to you enough how disturbing this scene was to me in 1983.

1:41:35 I stand corrected about an earlier scene. Superman went back to the chemical factory to get some acid to use against the ultimate computer. So, yes, foreshadowing.

1:54:53 So, let's add up all of the things that Gus Gorman did wrong in this movie. He embezzled money, hacked a weather satellite, used that satellite to almost destroy Colombia, poisoned Superman with sorta Kryptonite, endangered the world's oil supply and built an ultimate computer that almost killed Superman. What is Gus' punishment for all of this? His punishment is a job recommendation from Superman.

1:59:53 Clark managed to get his high school girlfriend, Lana Lang, a job at The Daily Planet and now Lois -- a woman for whom he gave all his powers away in the previous movie -- is back. I am not sure that he is fully recovered from his "dick-Superman" illness.

2:00:50 The Leaning Tower of Pisa leans once again as Superman flies into space and smiles at us. Smiles because he knows Superman III is over.

2:01:00 And, with that, my fond childhood memoires of Superman III have been obliterated. Though there are enough good scenes to entertain a nine year old, Superman III is a not a particularly good movie. Something deep down that I knew, but I didn't want to know.