Astronomers have known about these objects for decades, but in the depths of cosmic time, it's hard to understand how they can grow so quickly -- or maybe not!

Thanks to the painstaking research conducted by astronomers using the Hubble Space Telescope in the 1990s, the consensus is that virtually all large galaxies have at their centers massive black holes that formed over the course of billions of years. Our own galaxy, the Milky Way, has one of these massive beasts, whose mass is about 3 million times that of the Sun. The monster black hole at the center of the giant galaxy NGC 4889 has a mass that's estimated to be 20 billion times that of the Sun. And this galaxy is right in our cosmic neighborhood, only about 300 million light-years from the Sun! 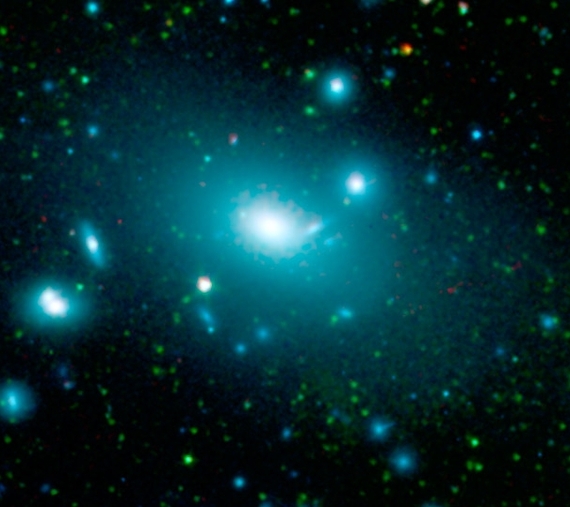 Let me give you a better perspective on what a black hole looks like. The radius of a simple black hole (nonrotating) is about 2.8 kilometers for every solar mass it contains. This defines the radius of its event horizon. Once inside the event horizon, you are dead meat in a matter of a millisecond. You cannot escape the intense gravity, and even worse, spacetime itself is in perpetual collapse, so there are no stable orbits. Your only destiny is to get snuffed out by the singularity. But because of the gravitational tides, you will be stretched out into an atomic tube of spaghetti long before you get this close. The gravity is lethal at a distance of 1,000 kilometers!

If the supermassive black hole in NGC 4889 were located where the Sun is, its event horizon would be 56 billion kilometers away -- far beyond the orbit of Pluto! The gravity tides are so weak you would not even feel that you had crossed over the event horizon until it was too late. Then your destiny would still be to collide with the singularity after a few hours of uncontrollable travel.

We know that black holes constantly gain more mass as they absorb surrounding gas, dust, planets, and even stars. The Milky Way's black hole just tried to feast on a cloud of gas in 2013. 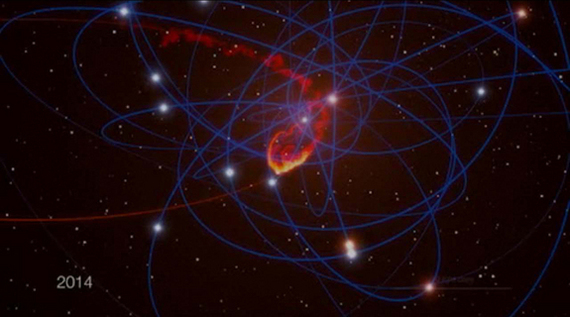 This event produced hardly a blip in the light and radiation emitted from this region of space. But when a black hole eats a wayward star, you get a huge supply of radiation that transforms the object into a quasar. In fact, for a rotating black hole, the energy you get is about 1/2 mc2 where m is the mass of the infalling matter. The radiation is so powerful that these quasar events can be seen clear across the span of the visible universe, billions of light-years away! Quasars require the consumption of about one entire solar mass of material every year to be as brilliant as they are.

Now here's the problem. You can only shove matter into a black hole as quickly as you can get it past the surface area of the event horizon. That means that small Sun-sized black holes with very small surface areas (about 8 square miles) take a long time to consume the mass of a shreaded star. But the vastly larger supermassive black holes can easily consume an entire star every year or more.

But there is a second problem. Most accretion occurs in a rotating disk that has to form because the angular momentum of the incoming star has to be conserved. This leads to a slow accretion process. A much faster accretion process happens in "spherical accretion," where the infalling gas enters along a direct "radial" direction with no angular momentum. But if the inflow is too dense, the radiation generated by the heated gas pushes back on the infalling material and slows it down. This is called the Eddington rate, and it seems to be the maximum rate at which even a supermassive black hole can eat. For the supermassive black holes in quasars, this works out to about a few solar masses per year.

What does this have to do with the recently identified supermassive black hole called SDSS J0100+2802? Well, based on its distance, we can estimate that the object we see today was created about 700 million years after the Big Bang, and some 400 million years after the expanding cosmic gas became cold enough to form small objects. The mass of this black hole is nearly 13 billion times the mass of the Sun. That means that over the course of 400 million years, it had to consume about 30 times the mass of the Sun every year. This is way above the Eddington limit. So how could such a massive black hole have formed?

Luckily, nearby, we have examples of how this might work. A faster growth rate can happen by black-hole cannibalism. When two supermassive black holes collide, they form a new black hole with their original combined mass. We see signs of this starting to happen in such galaxies as SDSS J120136.02+300305.5, in which the collision between two galaxies has left behind a 10-million-solar-mass black hole and a 1-million-solar-mass black hole, now spiraling into each other and separated by less than a light-year. 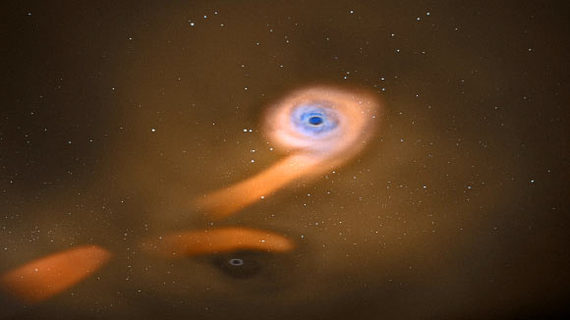 We know that in the early history of the universe, there were a lot of mass mergers going on. Most produced bursts of star formation, and we see these objects as multiple knots of brilliant UV light. So this may be the way that supermassive black holes like SDSS J0100+2802 grew to be such massive objects in only a few hundred million years.

Still, it is very impressive that not only can we detect these kinds of events occurring so close to the Big Bang but we can still find explanations from our local corner of the universe that seem to apply to such a remote time and space.