Sabine Heller: What's your vision for Erin Wasson X RVCA? Are you designing with yourself in mind?

Erin Wasson: I don't have a background in design so I think it's always about what I see in the world and what inspires me. So yes, I am designing for myself. I'm going through this whole evolution, which is a process of growing up and going from modeling to styling to designing. This collection encompasses that journey for me: a girl who crossed over some sort of boundary whether it be a real or a mental boundary. And she's in a desert wandering around. The color palette came from desert inspired themes: a lot of crèmes, mauves, browns.

SH: There's been a lot of noise about the fact that you showed in the tents. Some people say that you're bringing cool back to Bryant Park. Others say you've lost the plot.

EW: Have I lost the plot? I love that. Totally -- I've lost my fucking mind! I was given a wonderful opportunity to be here. I did have doubts, though. Was it too much too soon? Who am I to think that I belong here? It was very humbling. It was a very hard decision to make, but when life hands me an opportunity I'm always up for the challenge. Go big, or go home!

EW: There's a little bit of me in all of those descriptions but labels are labels. The people who really know me understand that I have a tough exterior but I'm actually just a hippie at heart.

EW: I love being a gypsy. Home is between New York and California. I'm also in the process of moving back to Austin, coming full circle and being closer to where I grew up.

SH: I know you're a big skateboarder. Do you really have a half pipe in your back yard?

EW: I really do, and I actually ride it.

SH: Are you more of a guy's girl than a girl's girl?

EW: I'm definitely more of a guy's girl. I love me a strong woman but, as a strong woman, I'm a little apprehensive about girl on girl relationships. Girls can be crazy.

SH: You made out with Justin Timberlake for the ad campaign for William Rast. How is he as a kisser?

EW: He was fine. When you're on set, you've got a crew of 60 people around you. It was nothing passionate.

SH: So what are you passionate about? 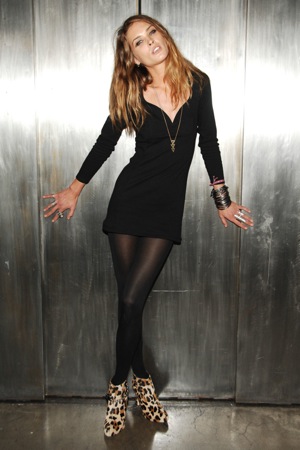 SH: Did you have an ugly ducking-turns-into-a-swan transition or were you always beautiful?

EW: I was a tomboy growing up. I literally went to the barbershop with my dad. Everyone thought I was my big sister's little brother. I was a scruffy little girl with a short boy haircut who wore basketball shoes and t-shirts.

SH: It's your funeral. What would you like to be remembered for?

EW: That I always carried some form of light where I went.

SH: The age of the model is back. Except this time models are no longer just pretty faces. They're so many of you doing really cool things.

EW: Yeah, we went from this very quiet girl to these real personalities.

SH: Are you friends with a lot of models? What are your friends like?

EW: My friends are all over the place. I've got artist friends, old friends, young friends--but I definitely don't hang out with models.

SH: What's the quality that draws you to people?

EW: As long as people keep it positive, I'm cool. This world has so many beautiful gifts to offer. When people complain my skin starts crawling.

SH: Talking about skin, you're covered in tattoos. What does tattooing mean to you?

EW: It's a way of expression. It's an emotional attachment to something whether it's a word or an image that I feel needs to be part of my body.

SH: I hear you're in Sofia Coppola's next film, "Somewhere?"

EW: Yes, for half a second. If you blink you're going to miss me. I have no speaking lines.

EW: She's beautiful and sweet and kind and incredible.

EW: I do love to dance. You give me some dirty south hip-hop, and something comes out in me from my Texas days. I love tribal music. I love African funk music. I like a little dose of reggae but it's gotta be good reggae. But then again, when I'm home, I'm listening to old rock n roll. It all depends. I love going to Texas and doing the two-step in a honky-tonk bar. I'll dance to anything.

EW: I've been listening to a lot of Spacemen 3 lately. I'll even bust out Patty Griffin and she'll bring me to my knees.

SH: Other than your close friend Alexander Wang, who is your favorite New York designer?

EW: I really respect what Michael Angel has done. He's a good friend of mine. He creates his own prints. When you meet him you think he's this funky Aussie, but he's profoundly intelligent.

EW: I just want people to know that I'm working my ass off. If they like what they see, cool, if not, maybe they will catch up.