Supermodel Maggie Rizer's two-year-old Golden Retriever Bea was very much alive when she and her family boarded a United Airlines flight bound for San Francisco from the East Coast. When the plane landed, Bea was discovered dead and Rizer, shaken, started to look for answers.

A Vogue covergirl and model for Calvin Klein, Tommy Hilfiger, Clinique, Louis Vuitton and Versace, Rizer began blogging about her life with her family and three dogs in December 2010 on a blog she dubbed "Bea Makes Three." After the titular math suffered a subtraction, Rizer took to "Bea Makes Three" to discuss her dog's death and her frustration with United Airlines' response.

When we arrived in San Francisco to pick up our dogs we drove to the dark cargo terminal and on arrival in the hanger were told simply, “one of them is dead” by the emotionless worker who seemed more interested in his text messages. It took thirty minutes for a supervisor to come to tell us, “it was the two year old.” Subsequently we requested that our dog be returned to us and were told that she had been delivered to a local vet for an autopsy. Whatever thread of trust remained between us and United broke and we then insisted that she be returned to us for our own autopsy by our trusted veterinarian, Shann Ikezawa, DVM from Bishop Ranch Veterinary Center. Over the next two hours the supervisor’s lie unraveled as it became clear that Bea was right behind a closed door the whole time and he had been discussing how to handle the potential liability with his boss who had left and sticking to the divert and stall tactic that they had been taught. Eventually Bea was returned and we drove her to the vet at midnight.

Accord to Rizer, her veteranarian concluded after a necropsy that Bea had succumbed to heatstroke.

"It will be two weeks since Beatrice was killed by United Airlines and since then United has refused to give us any information about what happened to our beloved little Bea other then, 'our internal investigation does not show any irregularities, as evidenced by the fact that your companion dog and other animals on board did not suffer the same fate,'" wrote Rizer.

In a statement to the airline claimed it was waiting on the necropsy results to finish its inquiry into the dog's death.

"We understand that the loss of a beloved pet is difficult and express our condolences to Ms. Rizer and her family for their loss," United Airlines' spokesperson Mary Ryan wrote in a statement to The Huffington Post. "After careful review, we found there were no mechanical or operational issues with Bea’s flight and also determined she was in a temperature-controlled environment for her entire journey. We would like to finalize the review but are unable until we receive a copy of the necropsy."

United Airlines did not respond to Rizer's claim that the airline had "called our veterinarian and fabricated a story about having an email from me, authorizing them to obtain the necropsy results."

E! News reported that the $1,800 fee the Rizer family paid to transport their two dogs is being refunded and United Airlines also covered the cost of the necropsy.

On its website, United Airlines stresses the excellence of its PetSafe program.

Earlier this year, the Department of Transportation reported that 46 animals died while flying on commercial airlines in the U.S. in 2011. This marks an increase from the previous two years. Thirty-nine animals died in 2010 and twenty-two died in 2009, the NY Times reported. 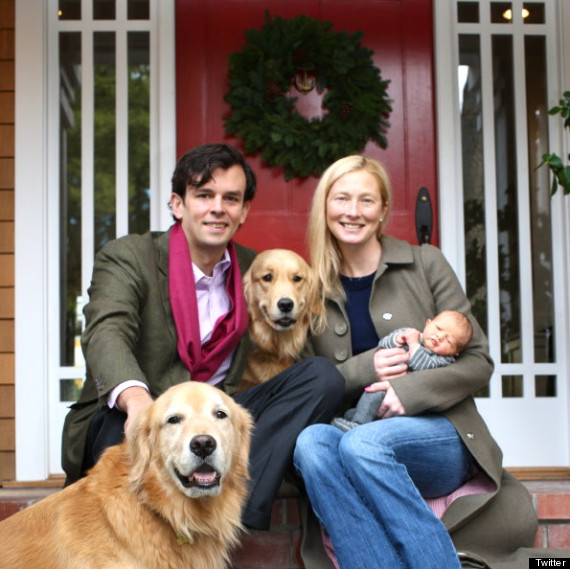 Maggie Rizer, her husband Alex, her son Zander and their two dogs.