When "Supernatural" star Misha Collins founded the charity Random Acts, its mission statement was ambitious, yet concise: "to conquer the world, one random act of kindness at a time."

It's a simple concept, inviting people to demonstrate a little extra kindness on a daily basis, whether that means offering to carry groceries for a stranger or paying for a friend to take a much-needed vacation when they can't afford a break. Though the loyal fans of "Supernatural" were quick to embrace Collins' philanthropic vision (and seem to have grown closer to each other and the show as a result), it's even more inspiring to see those who might never have heard of the CW series being touched by the project.

"I actually think that the most efficacious way of making a difference is to lead by example, and doing random acts of kindness is setting a very good example of how to behave in the world," Collins told me, back when Random Acts was still in its formative stages. "While it seems small, it can ultimately be somewhat profound in various people's lives. I know that when people have perpetrated such acts against me, it has had a lasting effect on me, so I like to return the favor."

Since one of Random Acts' main goals is to inspire and empower others to commit good deeds, it's only fitting that a like-minded company wanted to pay it forward; MacDonald Motorsports has donated ad space on their NASCAR racecar to Random Acts for the NRA American Warrior 300 race in Atlanta this Saturday, September 1. The race will air live on ESPN2 at 6:30 p.m. ET.

"I learned about Random Acts through their director, Cinde Monsam," team owner Randy MacDonald said in a statement. "Without sponsorship for Atlanta, I presented them with the opportunity to be highlighted on our racecar this weekend and they were thrilled with the opportunity. It will be great to have Random Acts on the car, and hopefully this will inspire people to perform more random acts of kindness in their daily lives.”

I caught up with Collins to learn more about how the MacDonald partnership came about, as well the other projects Random Acts is currently involved in -- with a couple of bonus "Supernatural" questions thrown in, naturally.

"I would love to be able to take full credit for [the partnership] myself, but Cinde, our new director, talked us up to the head of MacDonald Motorsports ... and he donated the car’s square footage to us," Collins explained. "Which is very, very cool, because Random Acts, as proud as I am of it, has never been nearly this studly. It takes it into a whole new league -- literally, the national NASCAR league."

The car, which will be known as the "Random Acts No. 81 Dodge" on Saturday, is driven by Jason Bowles. Collins admitted that he has an ulterior motive for wanting Bowles to avoid any wrecks on the track, since the car will be emblazoned with Random Acts' logo and web address. "Here’s what I want, I’m just gonna put it out there: I want Jason Bowles to win, and I want him to not scratch the surface of the vehicle," he laughed. "Is that too much to ask? I don’t know. Is it selfish? Yes." 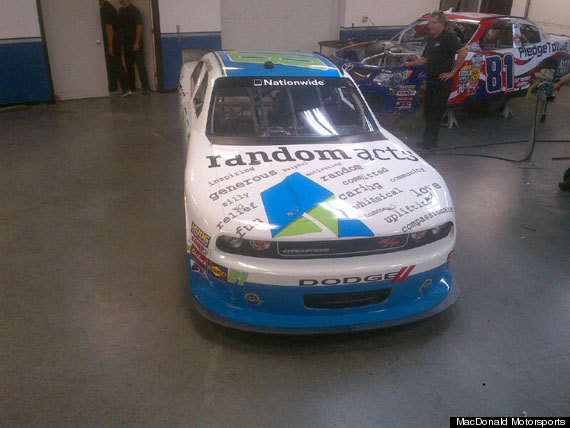 As for the organization's other acts, Collins observed that MacDonald's donation came at an apt time: "At this particular moment, there’s a few little vehicle things going on, so I feel like it’s very fitting that we’re also traveling around a NASCAR race track," he said. "We just got a woman, who was the victim of domestic violence, a car in Southern California. That was something she really needed for her work and she just needed a leg up. I delivered that car personally with a friend, and it was incredibly gratifying and cool. And I think we’re going to be helping to buy a bus for a free school in Nicaragua as well, so we're spreading out a bit."

Collins also shared that the charity is involved with reuniting a woman who was trafficked as a slave with her family, and that work is continuing apace with Random Acts' various projects in Haiti, where they've funded a community center and orphanage for the children of Jacmel who were displaced by the devastating earthquake in 2010, as well as supporting a number of other orphanages in the area. Additionally, it's hoped that Random Acts will be able to assist the Art Creation Foundation For Children, an art school for homeless, impoverished and orphaned children in Jacmel, in buying a new, permanent building before they're evicted from their current location.

Luckily for the "Supernatural" fans that Random Acts has inspired, Collins is still recurring on the cult hit, which begins its eighth season on Wed., Oct. 3 on The CW. His character, the angel Castiel, has had a fairly tumultuous journey since his introduction in Season 4, but Collins promised a little more equilibrium when the show returns.

"I will tell you that Cas ... for the most part, I would characterize him as sane, so his marbles are back, his screws aren’t quite as loose as they were at the end of last season," he teased. "But he’s full of remorse and regret and self-loathing, and furthermore, as if that weren’t enough, he is beaten and battered and stuck in Purgatory, so he’s in a pretty shitty situation ... But [his powers] work, for the most part, in Purgatory. He’s not totally flaccid there, which is good, but it’s Purgatory, so it’s not perfect."

When we spoke, Collins was in the process of filming Episode 5, and confirmed that so far, he's only read scenes involving Castiel in Purgatory. He's also had the opportunity to interact with Ty Olsson's Benny, the "strange bedfellow" (and dangerous vampire) that showrunner Jeremy Carver promised would become entangled with Dean (Jensen Ackles) and Castiel while they're trapped in that hostile environment. "I’ve had a few scenes with him so far," Collins said. "[Dean and Benny’s] relationship is budding, and I think Cas is a bit jealous of it, as a matter of fact."

Watch Random Acts' car, No. 81, race during the NRA American Warrior 300 on Sat., Sept. 1 at 6:30 p.m. ET on ESPN2. "Supernatural" returns Wed., Oct. 3 at 9 p.m. ET on The CW. You can donate to Random Acts or suggest your own act here. For more details on Collins' involvement in "Supernatural" Season 8, check out Mo Ryan's recent interview.

PHOTO GALLERY
Where We Left Off And What&#039;s Ahead For Your Favorite Shows

'Supernatural' Star Misha Collins' Charity, Random Acts, Teams With MacDonald Motorsports For NASCAR Sponsorship
Where We Left Off And What&#039;s Ahead For Your Favorite Shows

1 / 44
"The Good Wife": Where We Left Off
When we last checked in on the adventures of Lockhart/Gardner and co., Kalinda was ready to face her demons -- that pesky ex-husband -- and Alicia was debating whether or not to have some pizza with her family. Oh yeah, Louis Canning and Patti Nyholm were creating a whole lot of trouble for Will and Diane, too.
CBS