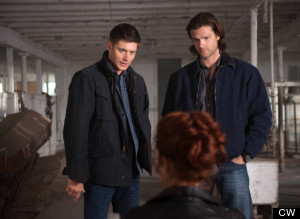 In the midst of "Lost's" rocky middle spell, a critic once described herself as being in "a loveless marriage" with the ABC show; and for a while, that was a fitting way to describe my relationship with "Supernatural," which airs its season finale Wednesday.

During long stretches of Season 6 and Season 7, the lingering affection I had for the show and my deep appreciation of its fine cast were nearly overwhelmed by irritation and dismay. When the CW show's eighth season began last fall, things got less dire, but the enterprise still gave the impression it was just going through the motions. I couldn't have been the only fan wondering if the end of the Winchesters' road might need to arrive sooner rather than later.

Lo and behold, in the last few months, this marriage was saved: My positive feelings about the Winchesters and their world have been rekindled. Not every Season 8 episode has been a keeper (please see the note below), but the show has recaptured a good deal of its mojo, and its mythology has expanded in a number of tantalizing ways.

At its best, "Supernatural" deploys angst, gallows humor and compassion in high-stakes situations, and it was wonderful to see that, during its climb out of television purgatory, the drama unleashed some emotionally involving, complex dilemmas that recalled the glory days of Seasons 2 and 4. I don't know that it will ever again reach the heights of those eras consistently, but recent developments have left it fairly well positioned for the future.

That said, I've come to realize that "Supernatural" has bumped up against some natural limits on where it can go from here. And truth be told, the growing pains that the CW drama experienced are pretty common. As it has moved toward its endgame, even "Mad Men" has been guilty into over-reliance on the same old bag of tricks and has occasionally recycled ideas that ran out of juice some time ago.

But "For Immediate Release," a great recent "Mad Men" episode, demonstrated that it's possible to use our long relationship with a show and our deep familiarity with its characters to great advantage. That episode of the AMC drama was compelling not just because it drew on everything we know about what matters to Don Draper and company, but also because it found new ways to put the characters' priorities and relationships in jeopardy. The show wasn't repeating history in a mechanical fashion, it was using history to add twisty new complications to personal and professional quests. "Supernatural's" "Clip Show" -- one of Season 8's best outings -- pulled off a similarly smart move.

After eight years, we know what matters to the Winchesters: Saving people, hunting things, the family business. Through a series of ruthless callbacks to Sam and Dean Winchesters' long history as hunters of things that go bump in the night, the demon Crowley put everything the brothers have ever done at risk. What if having been saved by Sam (Jared Padalecki) and Dean Winchester (Jensen Ackles) actually made targets of innocent people? Crowley's plan -- which Mark A. Sheppard delivered with typical evil glee -- was such a dastardly, shrewd inversion of everything the brothers stand for that I can't believe the show, which delights in finding new ways to torment these long-suffering men, hadn't pulled this trick before.

It has to be tough for the show's writers to come up with new ways to put the screws to the brothers, but "Clip Show" managed to find new territory for "Supernatural" to mine. And it wasn't the only heartening development this season: "Goodbye Stranger" was another high point, bringing back that pleasantly dense and emotionally intense Season 2 feel; almost everything about the appearances of Charlie (Felicia Day) puts me in my happy place; and I fervently hope we get a lot more on the history of Henry Winchester and the lore of the Men of Letters, which we first learned about in the solid time-travel episode "As Time Goes By."

For reasons I've never really understood, at times "Supernatural" has seemed wary of expanding the Winchesters' network of friends and family. Don't get me started on the way the Campbell clan was wasted in Season 6, and fellow hunter Garth is pretty much a misfire (and I don't say that just because I still miss the rarely seen Bobby). Sure, it's natural for supporting characters to cycle in and out of any long-term story, but the Winchesters are most memorable, I think, when they're standing inside a web of linked friends, enemies and frenemies, trying to figure out how to make it over the next big obstacle in the road.

The Winchesters' world may be more constrained than most -- their itinerant lifestyle means they'll never be able to join a bowling team or a book club. But like the rest of us, they define themselves by how they interact with the world. Non-hunters may not know that the Winchesters save many "civilians" on a regular basis, but Sam and Dean know they what they've managed to do despite incredible odds, and their ability to think about more than their own needs is just one of many "Supernatural" draws.

"Clip Show" succeeded so well in part because it reinforced the idea that the Winchesters have made a difference in the world -- and that their accomplishment matters to them (and to the audience, of course). The cost of altruism -- and the need for it-- are among the show's most effective themes, but it's hard for "Supernatural" to expand on those ideas when the links to supporting characters are flimsy and villains are as disposable as Dick Roman. (For that reason, I would have liked to see more definition of Naomi this season and more screen time for Castiel; this show doesn't use deus ex machina as such, but it sure enjoys whipping out an angel ex machina when it suits the plot.)

Maybe one of the keys to the show's future is in the Winchesters' past: Everything about the Men of Letters' bunker -- and the story possibilities that lurk inside the group's files -- fills me with pleasant anticipation about where things could go from here. And thank goodness for all those files, books and dusty records: As a show with more than 170 episodes under its belt, "Supernatural" needs all the fresh meat it can get for its storytelling machine.

Frankly, the least interesting parts of Season 8 involved the elements that felt borrowed from other seasons and other shows. The ancient tablets, Kevin Tran (who was never all that interesting on his own) and the quest to shut down Hell. I mean, don't we all know that, even if Sam succeeds with the third trial he's attempting, he will pay a Terrible Price? And that somehow that Terrible Price will be undone in Season 9, when the brothers will no doubt embark on a new quest? As for Sam's soft-focus flashbacks to his girlfriend Amelia, the less said the better. And as much as I like Ty Olsson as an actor, the vampire Benny and his friendship with Dean never did much for me.

The truth is, some of Season 8's architecture and connective tissue felt like offerings from a Biggerson's buffet, where the food may not be anything special, but hey, there's a lot of it! Still, the season that concludes Wednesday has often gotten the basics right. There was the gruff, pop-culture-laced dialogue, the always spot-on performances of Padalecki and Ackles and enough solid character moments to keep me on board (Castiel in the mini-mart buying all of Dean's favorite items was a very pleasing little vignette).

Looking at the big picture, I'm encouraged by the fact that episodes that drew deeply on the past and/or brought together Season 8's version of the usual suspects -- Crowley, Charlie, Meg, Naomi, Castiel and good new additions like Metatron/Marv -- crackled with life and energy. And I'm even more encouraged by the fact that Season 8 didn't rely much on the brothers being angry or out of sorts with each other, aside from understandable concern about each other's mental and physical condition.

Dean's embrace of his brother in "Pac-Man Fever" was not only a typically well-acted moment from the show's two leads, it also offered quite a bit of reassurance. It's good to know that, at this late stage, "Supernatural" knows it can get more mileage out of more or less united Winchesters than it can wring from another epic showdown between the siblings.

"Supernatural" has been, and always will be, the saga of two brothers traveling America's back roads in a classic car, trying to do some good in a world that can be cruel and capricious. When it focused on the deep bonds of love, hate and history that inform this world, Season 8 proved that it's still possible for the show to find unexpected twists and turns along the way.

Note: I heard from many fellow fans that "Man's Best Friends With Benefits" was awful (my colleague Laura Prudom, who's done a great job of covering the show each week, called it "half-baked"). Normally I'm an aficionado of "Supernatural" Gone Terribly Wrong (I do love a good "Route 666" joke), but that episode came along when my relationship with the show was just starting to improve, and I didn't want to jinx things by watching it. What do you think, "Supernatural" fans, should I break down and watch it this summer, or just pretend it never happened?