Note: Do not read on if you have not seen Season 7, Episode 15 of The CW's Supernatural, entitled "Repo Man." 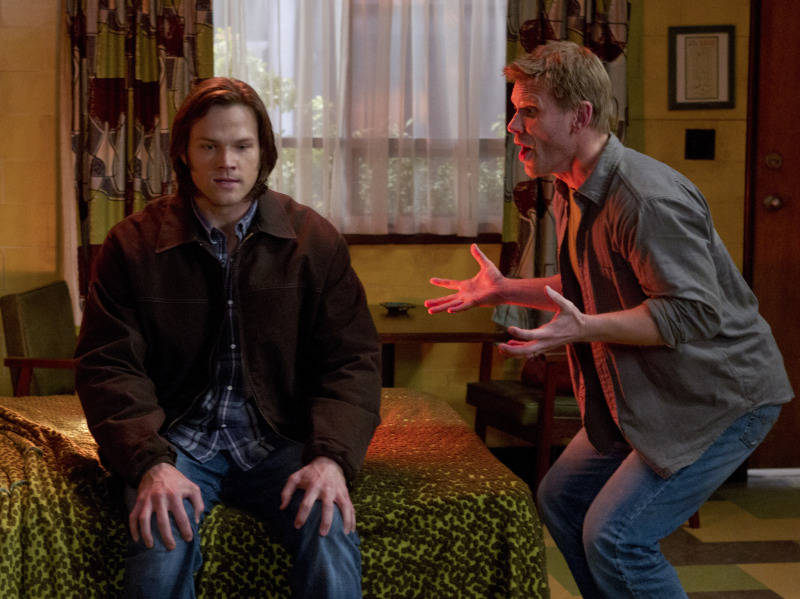 Whenever there's an A-grade episode of Supernatural these days, chances are that evil genius Ben Edlund is the man behind the magic. Sure, he's had a couple of clunkers since he joined the writing staff in Season 2, but overall, few scribes have a better grasp of Sam and Dean -- or crafting a well-paced and engaging hour of television -- than the "Angel" alum, which explains why "Repo Man" was one of the strongest episodes of the season to date.

Season 7 has been somewhat preoccupied with looking back to the Winchesters' roots, with the writers attempting a "stripped down, back-to-basics" approach -- more reminiscent of Season 1 -- with the brothers' story this year, utilizing various recurring themes and repeated setpieces to play on the audience's sense of nostalgia. That was demonstrated with a little less nuance in last week's episode, but since Edlund has been with the show for almost as long as current showrunner Sera Gamble, it makes sense that was able to produce something subtly familiar without being too heavy-handed. The beginning of the episode took us back four years, which would've put us in Season 3 or 4, taking into account Dean's year with Lisa and Ben. Judging by the emphasis on hunting Lilith instead of saving seals, I'm guessing we're supposed to assume 3, although Dean's practiced confidence with torture is more reminiscent of his time post-Hell -- though I suppose the semantics don't really matter.

After a brief but tantalizing glance at the much-missed Impala, we were introduced to Jeffrey, quite literally a man possessed. After enjoying a veritable demon-palooza in Seasons 3-5, I never thought I'd miss seeing the black-eyed suckers, but all the emphasis on the Mother of All and Leviathans over the last couple of years actually had me jonesing for the good old days of a simple possession, so the episode seemed well-timed. Guest star Russell Sams did an excellent job of imbuing the character with both demonic menace and jittery vulnerability, which made his later personality shift that much more effective -- although I wish the episode promos hadn't already spoiled the fact that he had enjoyed being possessed, and heavily implied that he was the one behind the second rash of murders before the show had even aired. Luckily, the performances were so solid that even knowing the villain didn't really detract from the enjoyment of the episode, which was thanks, in large part, to the return of Mark Pellegrino as Sam's hallucinatory vision of Lucifer.

Between his forked tongue and his unpredictable shifts from whiny child to jilted ex to knowing confidante to dangerous enabler, Lucifer proved to be a hilarious and chilling companion for Sam, making himself eerily useful in helping the younger Winchester solve the case (which raises the troubling question of exactly how a hallucination can point to clues that Sam hasn't discovered yet) when he wasn't begging for Sam's attention. Pellegrino chewed the scenery with manic glee, wholeheartedly embracing the concept of being the corrupting devil on Sam's shoulder, especially when it came to encouraging his darker urges -- goading Sam into threatening Nora after he realized that his brother was in danger. And the reappearance of Lucifer obviously let Edlund embrace his own dark side, enabling him to get away with some twisted lines that only Pellegrino -- or perhaps Mark Sheppard -- could pull off. A personal favorite (as terrible as it was) was, "That's what I'm talking about, Sam; real interaction again, I missed that -- the rapier wit, the wittier rape?" In addition to Lucifer's condescending narration over all of Sam's actions, some of the devil's more petulant moves were also hilarious, like his attempts to block Sam's view in the library unless he acknowledged him. The library patrons slamming their heads repeatedly against the desks was another deliciously wicked touch.

I enjoyed the way Edlund managed to parallel Sam's story with Jeffrey's this week without hitting us over the head with the similarities, allowing Sam's reluctant -- but growing -- reliance on Lucifer to quietly echo Jeffrey's desperate attachment to his own personal demon. Since Sam has always struggled with his dark side and the demon blood inside him, the show has often implied that it only takes one supportive voice to tip the balance from good (or at least harmless) to evil, the consequences of which we've already seen play out, when Sam turned to Ruby to feed his addiction in Season 4. Now, though, Sam isn't consciously making a choice to let Lucifer mislead him, or willingly indulging his darker urges even though he knows it's wrong (as Jeffrey was), but his sense of reality is obviously slipping and in his fear for Dean's safety, it's not surprising that he'd take any suggestion that's offered to help speed things along. Jared Padalecki did a great job of bringing out the familiar stirrings of Sam's soulless side, admirably balancing his callousness in intimidating Nora with his shaken reactions to Lucifer's tricks.

But in choosing to listen to Lucifer's (often sound) advice, Sam seemed to break the barrier between fantasy and reality, ending the episode no longer able to banish the fallen angel by squeezing the scar on his palm. Up until now, Sam has seemed capable of fooling Dean into believing he's still holding it together, but now that he can no longer force Lucifer to disappear, it's clearly only a matter of time before his sanity unravels completely.

Dean, meanwhile, was clearly continuing his trend of over-empathizing with many of the victims we've met this season. He could certainly relate to Krissy and Emma and their troubled childhoods in "Adventures in Babysitting" and "The Slice Girls," and has long been laboring under the assumption that every person the Winchesters encounter seems to end up having their lives ruined by their proximity to Sam and Dean, including Jeffrey. Looking at Jeffrey's group home, hearing how he'd lost his job and his health insurance as a result of the possession, Dean obviously felt burdened with guilt over the way Jeffrey's life had turned out, understanding all too well what exposure to the supernatural world can do to a person's psyche.

Jeffrey definitely had the measure of Dean, completely nailing where he is emotionally this season without even needing a demon to tell him which nerves to hit: "Hey, I was there; I was depressed, Dean, because he was gone. I was a wreck, an emotional shell, a drunk... I was suicidal," Jeffrey said, speaking about losing his demon, just as Dean clearly feels following the loss of Castiel and Bobby. It still remains to be seen if and how Dean will manage to pull himself out of the kamikaze nosedive he's currently in, but Jensen Ackles once again did a masterful job of conveying all of Dean's pain and guilt through body language as much as delivery of his lines, writing Dean's weariness into every inch of his body until he finally face-planted on the bed at the end of the episode.

While the episode did little to further the ongoing Leviathan mythology, it once again proved that some of the most compelling Supernatural episodes can still technically be standalones if they're well-paced, sharply written and offer further insight into our characters' mental and emotional states. Now that Sam can no longer defend himself against his hallucinations, we're heading towards a major meltdown, and I'm intrigued to see how the writers handle it this time around (since I didn't think that last season's attempt, "The Man Who Knew Too Much," was all that engaging), as well as how Dean deals with the possibility of his brother losing his mind for good. I just hope that the next few episodes are as strong as this one, since it felt every bit as polished as some of the best episodes from the show's most accomplished seasons (2 and 4), and aside from the inexplicable appearance of a devil's trap on the ceiling to incapacitate the demon, and the fact that Jeffrey killed his poor, defenseless rescue dog -- just to really drive home how "eeeevil" he was -- I had no complaints about the hour at all. "Repo Man" truly felt like Supernatural at its best. What did you think of the episode?

"Supernatural" airs Fridays at 9 p.m. EST on The CW. New episodes return on March 9 after a two-week hiatus.