Scientists have long known that "we are made of star stuff" -- or, in other words, cosmic dust. But where all that dust came from, and how it survived, has been a bit of a mystery.

Previous research held that supernovas--explosions of stars in their death throes--spewed out massive amounts of dust into the early universe. However, astronomers didn't know if that dust was able to withstand shockwaves from the explosion to serve as fodder for planets and stars to form.

Now, for the first time, an international team of astronomers has directly observed a cloud of cosmic dust that did survive in the turbulent environment of a supernova remnant, providing support for the theory that supernovas produced the vast amount of cosmic dust in the early universe.

"Our observations reveal a particular cloud produced by a supernova explosion 10,000 years ago contains enough dust to make 7,000 Earths," lead researcher Dr. Ryan Lau, a postdoctoral associate for astronomy at Cornell, said in a written statement. 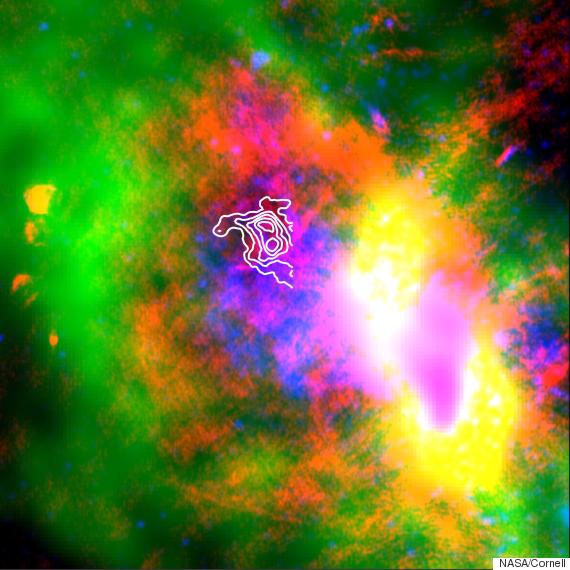 Peering into the center of the Milky Way galaxy, in this false color image, contour lines reveal the dusty area of Sagittarius A East - an ancient supernova remnant.

Lau and his colleagues found the elusive dust using NASA's airborne Stratospheric Observatory for Infrared Astronomy, which consists of a reflecting telescope aboard a modified Boeing 747 jumbo jet. 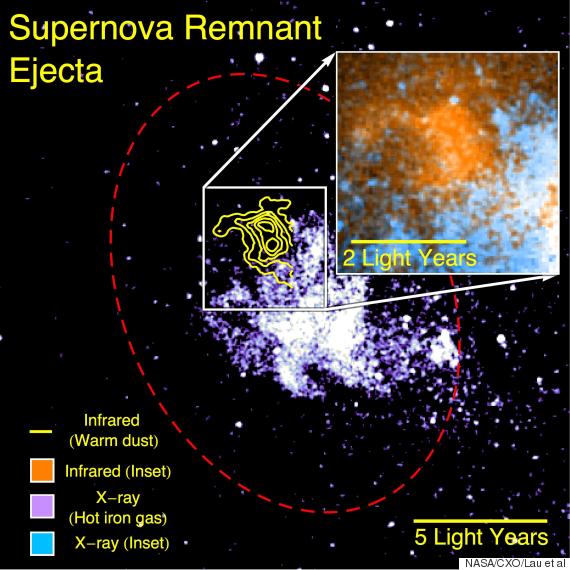 According to Lau, his team was actually looking at "two brighter features" around Sagittarius A East, a supernova remnant at the heart of the Milky Way, when they detected the dust.

By taking detailed infrared images of the dust cloud, the researchers were able to estimate that about 7 to 20 percent of the dust survived the explosion's shockwaves. The researchers say this may have occurred due to dense gas surrounding that helped the dust cool, Space.com reported.

A paper describing the research was published online on March 19 in Science.

Ancient Supernova Explosion At The Center Of Our Galaxy Created Enough Dust To Make 7,000 Earths
25 Gorgeous Images Captured By Hubble