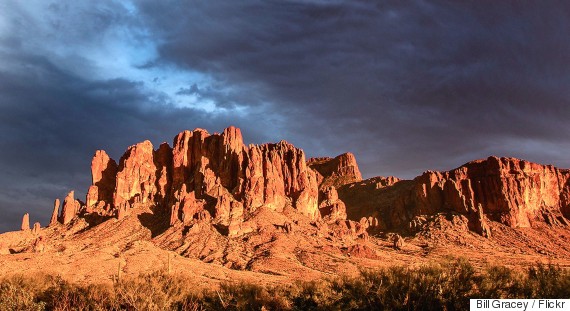 You don't have to be a pirate to feel the lure of hunting for buried treasure. History is filled with stories of buried fortunes, sometimes concealed in dangerous places.

As these legends go, the path to finding hidden riches generally depends on deciphering information contained in mysterious treasure maps. But beware: These maps can be treacherous.

All of these elements can be found in the search for the Lost Dutchman Gold Mine, reportedly well hidden in Arizona's mysterious-looking (and aptly named) Superstition Mountains (pictured above). Located east of Phoenix, the Superstition Mountains stretch across 160,000 acres of desert, and somewhere in these almost supernatural-looking canyons is a reported gold mine worth several hundred millions of dollars.

The trick, of course, is how to find it. 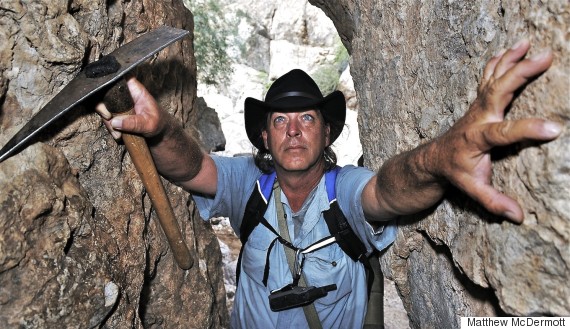 On History channel's series "Legend of the Superstition Mountains," a team of adventurers led by hunter Wayne Tuttle (pictured above) is following clues, including those on a mysterious map, hoping they'll hit pay dirt of what's considered America's most famous and deadliest buried treasure.

"It goes back to Jacob Waltz, an immigrant who settled in Arizona during the Gold Rush days of the 1800s, becoming one of the first residents of the township called Phoenix," Tuttle, a supervisor for a Phoenix electrical utility company, told The Huffington Post.

Tuttle added that Waltz took what he could, covered everything up and returned to Phoenix.

In a map called the Peralta Tesora Mappa (seen in the slideshow below), there are numerous drawings, "x" symbols, arrows and a giant heart.

According to the History channel, "Thousands have tried and failed to decode the series of cryptic clues said to lead to the fortune, leaving a trail of bodies and blood for anyone who has gotten too close to the truth."

Watch this video of the Dutch hunters following clues in the Peralta map:

The reported mine was dubbed Lost Dutchman around 1892 after Waltz died. It was loosely named Lost Deutschman or Lost German Mine, and to this day, anyone who researches or tries to find the gold are generally referred to as Dutch hunters.

"Waltz said it was a vein of gold surrounded by hematite in quartz," according to Tuttle. "It's hard to put a value to it, but he said most of the gold was the richest ore source he'd ever seen. I think that, now, it might be worth $200 million. It could be more or less, and until we find it, we won't know."

Tuttle's been on a 40-year quest pursuing this potentially large "pot" of gold at the end of a rainbow.

Tuttle says it's very difficult to decipher clues and maps and early accounts claiming to know where the fabled mine is.

"Part of the puzzle is when someone refers to a rock face, does that mean it's a rock that looks like someone's face? Or is it just a flat piece of rock that faces the mine?

"I've been in areas where it's said there would be no possible sign of gold. I've found mines that have been worked out and found ore samples that still hold traces of gold in them," Tuttle said. "The big prize, I think, for everybody, would still be -- even not finding the mine -- there is a stash of gold somewhere buried in a little pit in the ground near Waltz's camp, and who knows what that could be worth -- two, three million dollars just sitting there under our feet. Every time I'm in specific areas, I wonder if I've walked over that spot."

Trekking through the Superstition Mountains in search of gold:

The Lost Dutchman Gold Mine

After 40 years of avoiding a variety of Superstition Mountain perils -- poisonous snakes, scorpion stings, rifle bullets (from rival gold hunters) -- how much longer can Tuttle, now 50, continue his elusive quest?

"I'm a little slower now and wish I had the legs I had 20 years ago. I'm probably more patient and cautious. You risk your life anytime you go into any mountain range, but I believe you're gonna go until you can't do it again. I'll be at peace with it when I get to that point. Will I regret the day I can't get back in there? Probably, because I've had such a good time being in those mountains."

If you're not up to trying your luck trekking into the Superstition Mountains, looking for that still-elusive -- and historically dangerous -- multi-million-dollar windfall, there's always your less-perilous local lottery. You never know.

Full episodes of the current season can be viewed here.