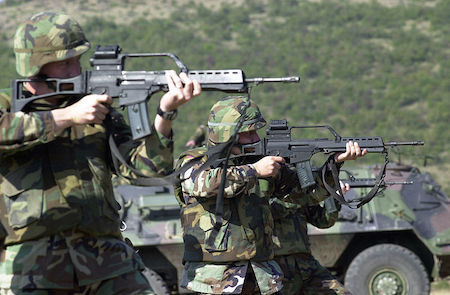 At one of the largest weapons fairs in the world last week, the Defence & Security Equipment International (DSEI), leaders of Mexico's navy and other military branches hobnobbed with arms dealers from around the globe.

The International Institute of Strategic Studies earlier this year called Mexico the third most deadly conflict in the world. While the war is purportedly between the state and drug traffickers, Mexican police, military and civilian institutions are deeply involved in protecting drug trafficking organizations, and many of those killed, tortured, or disappeared are Mexican and Central American families who have nothing to do with the drugs trade. European and U.S. governments and arms producers are well aware of the Mexican government's involvement in widespread abuses, which is well documented, but the weapons kept flowing.

In the most prominent case, Mexican police using imported arms attacked, kidnapped, and disappeared 43 student teachers from Ayotzinapa in Guerrero State in September 2014. Investigators of the disappearance of the students discovered that the police implicated in the atrocity used dozens of semi-automatic weapons produced by Colt Industries in the United States, Beretta of Italy, and Heckler & Koch of Germany, all companies that are showing their wares at the DSEI arms fair.

Germany bans weapons sales to the Mexican states of Guerrero, Chihuahua, Chiapas and Jalisco because of serious human rights problems. Heckler & Koch's sales of high-powered G36 rifles violated this ban and other German trade laws, according to Germany's Customs Investigation Bureau. Guerrero and Chihuahua have high levels of state violence, including extrajudicial killings, torture, and forced disappearances, according to investigations by the Mexican National Human Rights Commission and other human rights organizations.

German customs agents called for the prosecution of five ex-directors of Heckler & Koch a fine of three million Euros. But the UK, Italy, and United States have no such restrictions on arms sales to Mexico.

Lately Mexico has been on a buying spree for U.S. military equipment, especially helicopters and armored vehicles, with purchases amounting to more than a billion dollars since March 2014. U.S. Admiral William Gortney said the combined deals represent "a 100-fold increase from prior years."

Since April 2014, the U.S. State Department has approved sales of 21 Blackhawk helicopters to the Mexican military for $790 million, to support Mexican troops engaged in counter-drug operations. The helicopters are produced by Sikorsky, based in Connecticut, and General Electric, in Massachusetts, both vendors at DSEI (Sikorsky through its new parent company, Lockheed). The United States will also reportedly supply six M134 7.62mm machine guns for the helicopters, which fire up to 6,000 rounds a minute.

In May 2015, a Federal Police operation in Tanhuato, Michoacán fired from a Blackhawk helicopter indiscriminately at members of a drug trafficking organization, killing 42 civilians. In July, Mexican federal forces used helicopters and armed patrol carriers ('mini-tanks') to attack the indigenous community of Santa Maria de Ostula, also in Michoacán, while shouting "Up with the Knights of Templar," referring to a narco-trafficking organization that has terrorized the area.

In May 2014, Washington approved a sale of more than 3,000 Humvees for the Mexican military, at a cost of $556 million, in order to expand "existing army architecture to combat drug trafficking organizations" and enhance "interoperability between Mexico and the U.S." The Humvees will be built by AM General in Mishawaka, Indiana. A later report said that in December the Pentagon approved sale of 2,200 of the Humvee vehicles, for just $245 million.

Oshkosh Corporation of Wisconsin sold 245 'Sandcat' armored vehicles in 2012, according to UN data, not long after showcasing them at an arms fair in Brazil in 2011. The vehicles when equipped cost $250,000 apiece.

Mexico City police purchased five helicopters from Texas-based Bell in February, for another $26.4 million. The helicopters were to be assigned to the Condores, a group of special police. Two weeks later, the Mexican Air Force sealed a deal for 15 Bell helicopters, valued for at least $37 million, to be based at an airbase in Jalisco state. In January, the Pentagon said that the Mexican Navy, too, is buying Blackhawks - five of them, for $56 million. Last year, the Navy also received delivery of four King Air 350ER aircraft, to be used for "maritime surveillance of strategic installations, light transport, and medical evacuation." The aircraft are built by Beechcraft Corporation, a subsidiary of Textron Aviation, which sold another six aircraft to the Mexican Air Force in 2012, while Airbus earlier this year sold a C295 aircraft to the Mexican Navy, which are valued at $28 million and can carry anti-ship missiles.

All told, Mexico has purchased $3.5 billion worth of weapons and military equipment from the United States since late 2012, when current President Enrique Peña Nieto came into office, according to the Washington Post. Some were facilitated by the Pentagon at a discount. U.S. arms sales are not subject to human rights legislative restrictions.

In 2013, the U.S. approved more direct commercial sales (which may occur later) of military equipment to Mexico worth more than a billion dollars in, most of it for "spacecraft systems and associated equipment." This could include satellites, GPS systems, or ground control stations. It also approved sales of more than 116 million rounds of ammunition and $187 million in "military electronics."

The sales have also included guns and ammunition. In 2014, the U.S. legally transferred more than 28,000 firearms to Mexico, most of them military rifles, at a value of $21.6 million. The year saw the most firearms sales in dollars of the 15 years that the U.S. Census Bureau has kept data.

Many more weapons crossed the border from the United States illegally. In 2013, the Bureau of Alcohol, Tobacco and Firearms traced 10,488 firearms recovered at crime scenes in Mexico back to U.S. manufacturers or sales. A University of San Diego study estimated that a quarter of a million firearms were purchased annually in the United States to be trafficked into Mexico from 2010 to 2012. These numbers dwarf the disastrous "Fast and Furious" program by which ATF allowed hundreds of weapons purchased in Arizona to cross into Mexico in 2009 and 2010.

The massive militarization represented by billions of dollars of U.S. and European arms sales to Mexico as well as illegal gun trafficking is bad news for the many Mexicans devastated by the abuses of police and soldiers, the escalation of firepower when fights between government and non-governmental criminal groups occur, and the weapons that make their way illegally to trafficking organizations. To find a healthy balance of trade and address our own problems, the U.S. and European nations must develop other capacities besides producing guns and military equipment for use in dirty wars.

This post also appeared at the Campaign Against the Arms Trade and American Friends Service Committee sites.