As a surfer in waters that are home to turtles, monk seals and, yes, sharks, whose favorite foods they are, I confess I get nervous at dusk, although the odds reveal no rational basis for my fear. Even "Soul Surfer" Bethany Hamilton, who at the age of 13 lost her arm to a 14-foot tiger shark, has said she doesn't fear another attack, and with good reason: One is a thousand times more likely to be killed by lightning ; in 2010, there were only 79 unprovoked shark attacks, six of them fatal, worldwide.l. Sharks, who have no natural taste for humans, are in far greater danger from us. A third of open ocean sharks are threatened with extinction and over 100 million are killed by the fishing industry every year, 73 million of these to provide fins for soup. 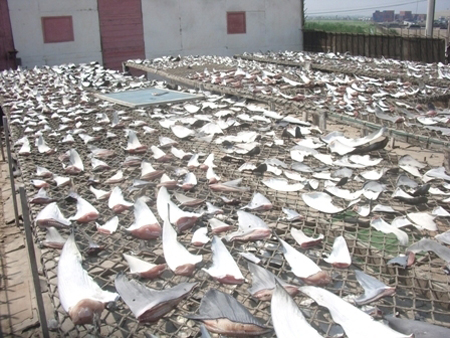 In this brutal practice, fishermen cut fins off living sharks and toss the mutilated creatures back into the sea, where they die slowly and in agony while boat holds are filled with amputated fins. Removing sharks, a top predator, from the habitat unbalances ocean ecosystems, as well. You'd think that, with the U.S. Shark Conservation Act signed into law by President Obama this January, making it illegal for any boat to land shark fins without the body attached, the atrocity would come to a halt. You would be underestimating the demand for shark fin soup. Where there is demand, the market will find a way to supply it.

Time to go beyond the boat. What's needed now to end this cruelty are bans on the trade itself. "While shark finning is illegal in the U.S., current federal laws don't prohibit the importing of fins from countries without such shark protections in place," explains Will Race, Oceana Pacific communications manager.

In a hopeful trend, bills banning trade and possession of shark fins passed in Hawaii last year l and the Northern Mariana Islands and Guam in early 2011. Similar bills have recently been introduced in Oregon, California and Washington. On April 5th, the Washington legislature passed a bill that now awaits signing by the governor. In California, one of the largest markets for shark fins outside of Asia,a single shark fin in San Francisco's Chinatown can sell for more than $500. The recently established Asian Pacific Ocean Harmony Alliance, a coalition of Asian and Pacific Island Americans, educators and city council members supports banning shark fin soup because it violates the cultural value of harmony with nature. Sharks, who eat at the top of the food chain, are also high in neurotoxic mercury and should not be eaten by pregnant women or young children, Environmental Defense Fund and others say.

Even a hardy band of shark attack survivors is supporting shark fin soup bans. It's time for all consumers to do our part by telling our representatives to end trade in shark fins and asking fishmongers and restaurants not to sell them.

Visit the San Francisco Aquarium of the Bay's exhibit on shark finning, opening the third week in April.

Choose sustainably harvested seafood that's low in toxins. Sharks are neither! Get the good and bad on fish and shellfish species with EDF's Seafood Selector tool.

Learn more about protecting our oceans as a global ecosystem with Pew Environment and the Blue Frontier Campaign.