When I became Chair of the C40 Cities Climate Leadership Group (C40) three years ago, I could have only imagined the work that would be taking place to fight climate change in cities around the world today. In my time as Chair, C40 has grown to a network of 85 of the world's megacities representing over 600 million people, and has been an integral partner in the formation of the Compact of Mayors, a growing platform of over 500 cities registering their dedication to climate action and commitment to reporting greenhouse gas emissions in a transparent way. 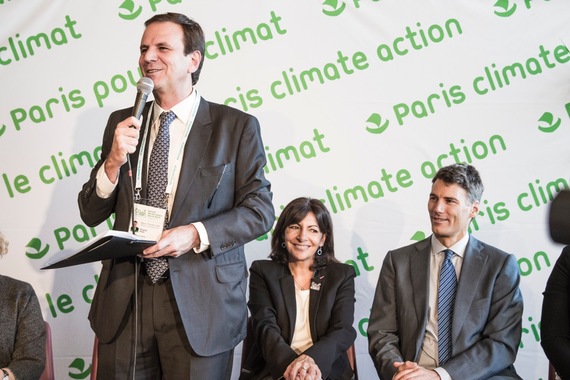 By joining together to set ambitious emissions targets and demonstrate our ability to deliver on our commitments, we've been able to steer the course of history. To date, 62 C40 cities have committed to the Compact of Mayors, and I am proud that my city, Rio de Janeiro, was the first city in the world to be fully compliant with the Compact. At COP21 in Paris the world's leaders were supported and encouraged to take stronger action because of the work taking place on the ground in our cities, but that was only the beginning of the potential for local action. This week, UN Secretary-General's Special Envoy for Cities and Climate Change Michael R. Bloomberg and European Commission VP Maroš Šefčovič announced a merger between the Compact of Mayors and the EU Covenant of Mayors to create the Global Covenant of Mayors for Climate & Energy, bringing together over 7,100 cities which have made public commitments to tackle climate change.

When I was elected as C40 Chair, I committed to carrying forward the organization and building on the legacy of former chair three-term New York City Mayor Bloomberg. At the heart of the legacy is supporting cities who are at the front lines of fighting climate change, like my home city of Rio, and the creation of the Global Covenant of Mayors for Climate & Energy is a natural continuation of our work empowering cities around the world to find bold solutions to climate change.

The merger of the Compact and the Covenant was born out of the uniform dismay of mayors and urban leaders at the failure of COP15 in 2009 to deliver real results. But while presidents and prime ministers were struggling to find consensus in Copenhagen, mayors were gathered together at City Hall to share experiences and create a common resolve.

From that root of self-organisation, the city voice grew palpably stronger when the UN Secretary General recognised the pivotal role of mayors in delivering climate action by appointing Michael Bloomberg as UN Special Envoy. One of the many major fruits of that appointment was the launch of the Compact of Mayors, under the leadership of the world's global city networks - C40, ICLEI - Local Governments for Sustainability (ICLEI) and the United Cities and Local Governments (UCLG) - with support from UN-Habitat. The Compact of Mayors provides a truly bottom-up approach, utilizing city networks like C40 to have an increasingly influential role in creating low carbon leadership.

I am now delighted that the Compact of Mayors will be partnering with the enormously successful Covenant of Mayors, which has made great strides in galvanizing action from European cities. When the Covenant of Mayors expressed interest in expanding globally, it was a natural fit to bring together big and small cities from all regions of the world. Individually, both initiatives have successfully worked with cities across the globe, from megacities to mid- and smaller cities, to encourage local governments to set more ambitious climate reduction goals, take aggressive action to meet these objectives, and measure their progress.

The support of coalitions like the newly formed Global Covenant of Mayors for Climate & Energy cannot be underestimated. While cities are key actors in delivering a low-carbon future and mayors are taking a leadership role in implementing action on the ground, mayors are not always able to achieve the scale of their ambitions. Recent C40 research gives us a much deeper understanding of the barriers holding mayors back. The Global Covenant of Mayors for Climate & Energy provides cities with a single platform to harness and capitalize on the power of our combined commitments. The strength of unity in the Global Covenant of Mayors will allow cities to be equipped to overcome the obstacles that must be taken down if the world is to deliver on the 1.5-degree target of the Paris Agreement.

Our work together has brought us to this moment, a moment where cities are not only drivers of development, growth and investment, they're also leaders in meeting these targets. The support of leaders like Michael Bloomberg, city networks like C40, and initiatives like the new Global Covenant of Mayors for Climate & Energy are integral to empowering cities to cooperate with each other and accelerate climate action. Together, we will continue to find solutions in our own cities to spur action across the globe.