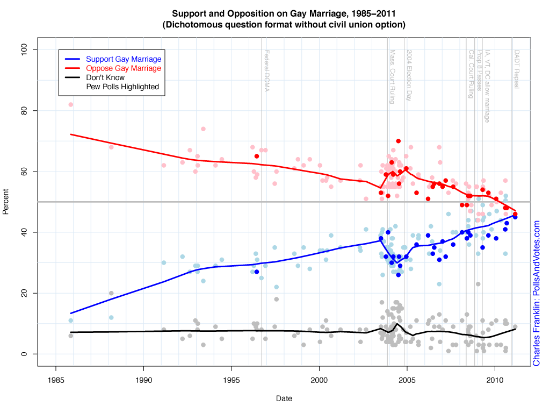 Support for gay marriage continues to rise in a new Pew Center for the People and the Press poll, completed 2/22-3/1/2011. The latest poll shows support at 45% and opposition at 46%, the narrowest margin in the history of Pew polling on the issue. Some polls by other pollsters have found support exceeding opposition but as the chart above shows, the trend estimates have converged by not quite reached equal levels of support and opposition. The consistency of the trends since 2005, however, all but guarantee support will exceed opposition within the year.

The long term trend is one of the most compelling in recent history. With the exception of 2004, following the first legalization of gay marriage in Massachusetts which provoked a brief backlash, support has steadily risen while opposition has declined since the first polls on the topic in 1985.

The question wording for the above chart is a dichotomous one, basically “do you believe gay marriage should be legal”? Actual question wording varies across pollsters but all offer only legal or not legal response options. Since 2004 several pollsters (not including Pew) have also offered a trichotomous question, offering “civil unions but not marriage” as an option. Those data and trends are plotted below through the fall of 2010, the last poll we have with this form of the question. 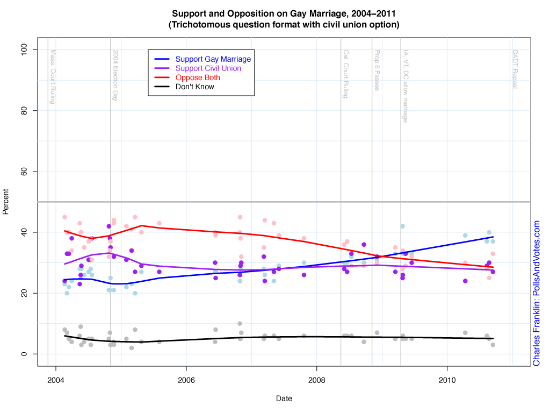 The striking result here is that support for marriage has moved from third to first place among these three options, while opposition to any legal recognition has fallen to near-parity with civil unions. While the civil union preference has remained flat, support for marriage actually passed opposition to any legal relationship at the very end of 2008. While we don’t have direct data on who is changing, it is plausible to imagine movement from complete opposition into civil unions and simultaneous movement out of civil unions into support for full marriage rights. The stability of the civil union group suggests that this movement has been quite evenly balanced. While this series has not been asked since September 2010, the continued trend in the first chart gives us no reason to expect a sharp change in this trend in the last 6 months.

Much has been written about the generation gap in views of gay marriage. The trends here show that opposition to gay marriage is becoming a less and less acceptable position through the public more generally. It is not merely the young who are shifting views. While individual states are certain to vary widely in the balance of public opinion, the national shift is so striking and so regular that it is hard to imagine this issue will remain in doubt for much longer. As a majority emerges in support of gay marriage, the political issue will be state by state repeal of the various “defense of marriage” amendments and referenda that passed in 2004-2006. That battle will depend much more on the more variable views in individual states.

Crossposted at Polls And Votes.