After my son, Ethan, was diagnosed with a rare and fatal genetic syndrome called Hunter syndrome, my husband and I were offered a place in a support group for parents who are raising children with special needs.

We didn't have a babysitter, so I found myself sitting alone in a circle surrounded by strangers four months after Ethan was diagnosed. 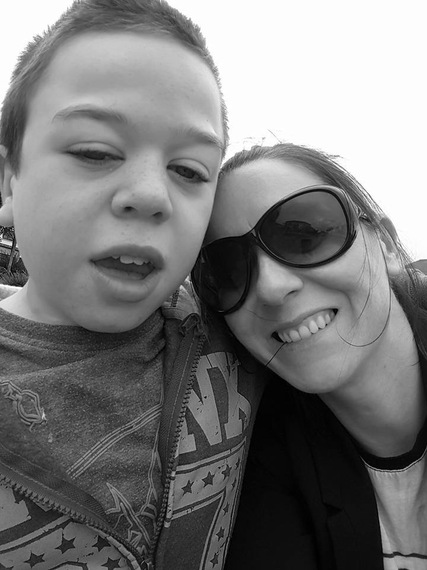 We all introduced ourselves. I remember the relief I felt when the first person just said their name and nothing about their child's diagnosis. Just my name, I can do that. I reassured myself.

I smiled as I tried to remember the two women's names who were sitting on either side of me.

If I could do that much, at least I'd be able to chat with them over the coffee break.


"OK, guys. Now, I know we have a few new faces in our group. Perhaps you could just give a quick little intro about yourselves, your families and the reason you're here on this beautiful summer evening," the woman leading the group announced.

A woman to the left of the group leader began her story. I sat straighter in my chair, hoping I wouldn't cry.

I sat and listened as she told us all of how her boy was born with Down syndrome. How she was devastated. How her life was going to be so very hard.

I took a deep breath.

The man next to her was here because his son had to (maybe) wear hearing aids for the rest of his life.

The woman next to me was devastated that her daughter had learning difficulties. It was hard to explain simple tasks to her daughter and taking her a long time to learn. It was now impacting on her marriage.

Then it was my turn.

They all looked at me.

My mouth was dry.

I didn't want to say anything.

I felt my eyes sting.

This was the wrong group... for me.

Get out, get out my mind was screaming.

I took another deep breath, cleared my throat and almost in a whisper said, "I'm here because I was told it would help, but..." I looked at the floor, rubbed my sweaty hands together and felt my eyes get wetter.

I shook my head, hoping they'd move on.

"You're safe here," the group leader softly spoke as she came over and bent down beside me. "You can vent your feelings. We're all in the same boat."


I shook my head and heavily sighed "We're not even in the same sea, let alone boat." She patted my back. "OK, guys, take five and we will get back to it then."

I kept my head down as I watched all the legs leaving the room. The leader stayed, patting my back. I felt uncomfortable. I'm not good with people being too close to me, and boy, was this woman close to me.

"Sorry," I wiped my eyes. I was now embarrassed and felt like I was causing a scene.

"Emotions are raw. You're new so I am going to assume you're also new to the diagnosis your child has been given," she said.

"All I am ever given is a name, I know nothing else. I'm not able to help you come to terms with it if I don't know what it is?" Her voice was soft and low.

I tried to say it.

The words labored my breathing.

She handed me a pen and held a notebook up. "If you can't say it, write it. Sometimes that's the only way we can communicate when the words hurt our hearts."

I took the pen. My hand was shaking as I wrote, Hunter syndrome. Rare. Dying. I dropped the pen and I wept.

I let it all come out while she rubbed my back.

"I don't know what to say except that I am truly sorry," her voice wobbled.

I looked at her. She sighed, her tears no doubt blurring her vision. "I am sorry you had to sit here, too."

I took slow deep breaths as the room began to fill again.

"I will give you a number, Ger, and I want you to use it." She ran over to her handbag and handed me a card.

"Thanks" I whispered while trying to compose myself.

She smiled as I quietly left the room.

I rang the number on her card and sat in a small room weeks later for my first of many counseling sessions.

I found the correct support group for me, eventually.

I learned a valuable lesson from the group leader.

Sometimes the only way we can communicate when the words hurt our hearts is through writing, she was right.

This is my therapy and you the reader, are my kin.

More:
terminal illnessHonestyMotherhoodParentsReal Life
Newsletter Sign Up
Raise the kind of person you'd like to know
Subscribe to our parenting newsletter.
Successfully Subscribed!
Realness delivered to your inbox

Mammy, writer,fixer of scrapped knees and broken toys and an all round Elvis lovin' Irish girl