WASHINGTON -- The Supreme Court unanimously struck down Thursday a Massachusetts law allowing abortion clinics to have a buffer zone keeping protesters at least 35 feet from entrances and walkways.

They did so from behind their own buffer zone, which they created for themselves last year to keep away protesters.

"It is no accident that public streets and sidewalks have developed as venues for the exchange of ideas," Roberts said. "Even today, they remain one of the few places where a speaker can be confident that he is not simply preaching to the choir."

But Roberts and his court don't actually want this exchange of ideas at their taxpayer-funded doorstep.

In 2012, the court issued a regulation banning all demonstrations on the 252-by-98 foot plaza right outside the government building. The only place for people to protest, therefore, is on the adjacent public sidewalk.

Lawyers for the marshal of the Supreme Court have argued that the buffer zone is necessary for the "unimpeded ingress and egress of visitors to the court" and to preserve “the appearance of the court as a body not swayed by external influence.”

But the calculation is different, apparently, for abortion clinics and the women who come for medical services.

Supporters of the Massachusetts law have said that protestors who show up at the clinics terrify the patients, as escorts struggle to get them through anti-abortion crowds and into the facility. The buffer zone is needed, they say, to create a safe space for the women coming to the clinics.

"We have people with giant, grotesque signs that will scream and videotape patients, and that is something that is directly instilling fear and blocking women's access to their health care," one patient advocate told The Huffington Post.

The court also said Thursday that instead of issuing broad restrictions like buffer zones, states should first use more narrow measures, such as having police officers instruct protesters to move aside and allow a patient to pass.

"At each of the three Planned Parenthood clinics where petitioners attempt to counsel patients, the zones carve out a significant portion of the adjacent public sidewalks, pushing petitioners well back from the clinics’ entrances and driveways," concluded Roberts in his opinion. "The zones thereby compromise petitioners’ ability to initiate the close, personal conversations that they view as essential to 'sidewalk counseling.'"

Citizens may show up at the Supreme Court to initiate a "close, personal conversation" about this abortion buffer zone ruling -- as long as they stay at least 98 feet away from the Supreme Court.

NARAL, which supported the Massachusetts law, put up an image on Facebook showing the difference between the two buffer zones: 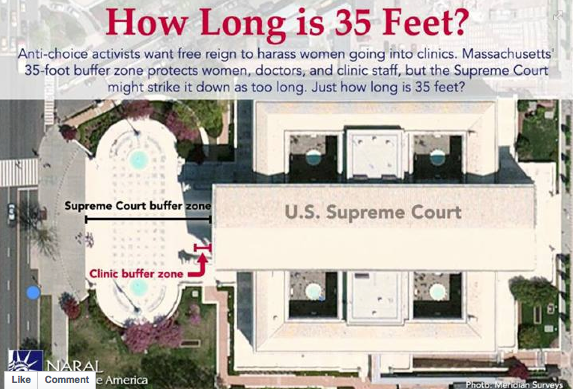