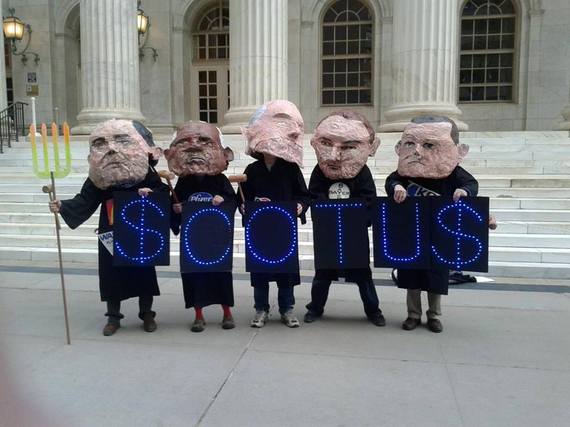 The decades-long power grab by greedy oligarchs and the concomitant convulsion of democracy has been vastly accelerated by Supreme Court decisions that equate money and free speech, granting the latter to flush billionaires and effectively silencing the majority.

In Citizens United v. FEC in 2010, the five most conservative Supreme Court justices struck down the longstanding ban on corporate expenditures in federal elections. Their action opened the floodgates for vast amounts of secret money and unlimited contributions that distort elections and corrupt government policy-making, observed Fred Wertheimer, longtime national leader on money in politics and campaign finance reform. Furthermore, the "Citizens United and [subsequent] McCutcheon decisions...have empowered a new class of American political oligarchs and have come at the enormous expense of the voices and interests of more than 300 million Americans."

Senator Bernie Sanders comments that since the Citizens United v. FEC decision, relatively few donors are exerting massive influence over U.S. politics and policy , the top .01 percent of income earners making more than 40 percent of campaign contributions. The Brennan Center reports that more than $1 billion in super PAC spending has occurred since Citizens United, with almost 60 percent of that money coming from 195 individuals and their spouses.

﻿At the apex of extraordinary wealth sit David and Charles Koch, with a net worth of $44.9 billion and $44.8 billion respectively, oil barons whose wealth from Koch Industries continues to multiply despite the fall of oil prices by more than 50 percent since June 2014. The Koch brother's political network has announced their plan to more than double what they spent on the 2012 elections (over $400 million), allocating almost $889 million for the 2016 elections. Said to total roughly as much as Republican Party's three National Committees spent on the last presidential election, most of this staggering sum is "secret" money. The Kochs are not required to register under campaign finance laws, follow financial reporting rules of a political party, or reveal donors, even though they have effectively created a pseudo-political party of conservative rich activists. At their recent Palm Springs retreat hosting probable Republican presidential candidates, the Kochs' network for the first time indicated an interest in weighing in on the presidential primary fight.

Sanders relates that in the '90s unlimited corporate soft money flowed to both political parties, which voted to deregulate Wall St. and passed a "free trade" deal that shipped U.S. jobs overseas - just the beginning of the symbiotic relationship between money and power. The Trans-Pacific Partnership, one of a number of trade deals currently being negotiated, has been called "NAFTA on steroids," having more to do with a huge corporate power grab than with trade.

Insult upon injury, in 2014 the "Supreme Court Five" ruled in McCutcheon v. Federal Election Commission that the cap on the amount of aggregate contributions made by an individual to candidates, parties and political committees be raised from $123,000 to $5.9 million.

Said Wertheimer, the McCutheon v. FEC decision represented just one more step by the Supreme Court majority to destroy the nation's campaign finance laws. "The Court in McCutcheon overturned forty years of national policy and thirty-eight years of judicial precedent to strike down the overall limits on the total contributions an individual could give to federal candidates and to party committees in an election cycle...The McCutcheon decision represents the first time that the Supreme Court has reversed a holding in its landmark decision in Buckley v. Valeo and the first time the Court has struck down a core federal contribution limit."

A symptom of the corrupt ties of money and power and the erosion of any semblance of U.S. democracy, current Senate Majority Leader Mitch McConnell requested permission to submit testimony in the McCutcheon case. The Supreme Court permitted his lawyer to present his views - that wealthy donors should be able to donate unlimited sums of money directly to political candidates.

It has become painfully obvious that government is not working for the people, and won't until the corrupting influence of big money is eliminated or otherwise countered.

Some Antidotes to Big Money Control of Washington

Supreme Court Justice John Paul Stevens wrote in his dissent to Citizens United that corporate "'personhood' often serves as a useful legal fiction. But they are not themselves members of 'We the People' by whom and for whom our Constitution was established."

In Denver on the fifth anniversary of Citizens United a coalition of groups held a Press Conference to share strategies for moving forward, even as they unveiled a "Democracy Wall" picturing messages from Colorado residents about corrupting effects of big money on elections.

Efforts to level the playing field between persons and corporations include passing anti-corruption laws at every level of government; requiring disclosure of political contributions; and helping small donors leverage their contributions to balance their participation with big money lobbies. Local Community Rights groups organizing in communities around the country also seek to pass local ordinances to protect their air, water and land, and state constitutional amendments to prevent corporate preemption of those laws.

Colorado Public Interest Research Group (COPIRG) unveiled their report Reclaiming Our Democracy: Moving from Big Money Dominance in the 2014 Midterms to a Small Donor Democracy. The report examines the role of money in the 2014 congressional elections, and demonstrates that matching small political contributions with limited public funds "can change the campaign landscape for grassroots candidates."

Clean Slate Now advocates for legislation and candidates focused on campaign reforms, specifically promoting publicly financed campaigns and small donor empowerment, addressed in part by their endorsement of The Government By the People Act. Clean Slate tracks candidates who do or do not accept special interest PAC money.

Also represented at the event was an activist from Lafayette who has worked with the Colorado Community Rights Network. To date, over 150 local ordinances and charter amendments to restore local community rights and prevent corporate preemption have been passed in 11 states. In Colorado in 2013, aided by Community Environmental Legal Defense Fund (CELDF), the residents of Lafayette passed a Community Bill of Rights, which was added to their City's Charter. It bans oil and gas extraction within the city limits, grants rights to Nature, and states that corporations are not people. Such acts challenge several centuries of court decisions and laws that bypass the basic democratic rights of people, and grant so-called corporate rights of "personhood." Subsequently, the Colorado Oil and Gas Association (COGA), sued the City of Lafayette, claiming that a State law -- the Colorado Oil and Gas Act -- trumps the people's right to self-determination. Lafayette citizens in turn launched a class action lawsuit to protect their community rights ban on fracking.

The group Represent.Us has initiated an Anti-Corruption Act, seeking to expand its adoption in cities and states across the country. In brief, it seeks to 1) Stop lobbyist bribery (i.e., banks should not give money to legislators who regulate them); 2) End secret money; and 3) Empower voters by granting a tax credit to those who remain within a certain contribution limit. In 2014 Tallahassee, Florida became the first U.S. city to adopt the American Anti-Corruption Act, requiring the establishment of an Independent Ethics Office to Oversee City Commissioners. Emphasizing a "cross-partisan" campaign, the Tallahassee coalition included a former president of the League of Women Voters, the chair of the Florida Tea Party, the chair of Florida Common Cause, and a former County Commissioner.

Naming the influence of big money on politics and policy the "next big American crisis," advocates of reform note the system is rigged for big banks, energy companies and other special interests; that courts line up against the majority on basic democratic freedoms; while elections are handed over to big money lobbyists, with consequent congressional gridlock blocking reform.

With the intent of countering big money elections and multiplying the impact of small-dollar donors while amplifying their voices, Rep. John Sarbanes (D-Md) reintroduced the Government by the People Act (H.R. 20) on the fifth anniversary of Citizens United v. FEC. To encourage increased numbers of smaller donations to candidates, the Act would grant a tax credit to donors who do not give more than $300 cumulatively to any one Congressional candidate. It would amplify the voice of small-dollar donors by matching donations of $150 or less, providing a candidate forgoes big-money interests. Further matching funds would be available to candidates who meet fundraising thresholds in the final 60 days of a campaign. Over 150 congressional cosponsors are listed.

Rep. Sarbanes expressed the need to level the election playing field, to ensure that "the priorities and concerns of the people will once again find expression in the public policy that comes out of Washington." Sarbanes is reportedly one of only 5 congressional members who did not take PAC money last year.

Other remedies to establish the people's democratic control of government include efforts to open up the electoral process that is now controlled by the Republican and Democratic parties. Permitting "Yes" - "No" voting on all candidates, or multiple "Yes" votes could begin to level the playing field, and counter the "spoiler" effect that is based on the domination by two political parties.

Big-money politics is promoted by a corporate media that makes a killing every election season. Instead of media treating elections as a commercial endeavor, why not a public service that examines the issues and grants equal time to all serious candidates. Ballotpedia lists each state's requirements to qualify for ballot access. In Colorado candidates for State House or Congress may have to collect 400 to 1,000 signatures, or 2-30 percent of the total number of votes cast for that office in the previous election.

Ballot access tracker Richard Winger notes that for presidential elections the bar is set much higher for minority and independent candidates than for for the two major party candidates.