Most of my family lives near Aurora, Colorado.

My nephews are huge Batman fans.

Luckily, Zac and Caleb are only six and three years old. Friday night, at midnight, they were sound asleep in their beds, dreaming of superheroes.

Me, I'm a Supreme Court scholar, a Philadelphia law professor, and a mother.

To me, the theater shootings in Aurora are the perfect storm of everything I care about, all mixed up together.

I care about kids' safety.

I care about gun control.

I care about the Supreme Court's two recent decisions about the right to bear arms.

And I care about the fall election, in which Americans will elect a president whose legacy will almost certainly include appointing at least one Justice to the United States Supreme Court.

Today, as the media converges on Aurora, as families mourn their dead, as parents fear for their own kids' safety, and as Americans ask, "How could we let this happen again?" it's time to start talking about just what we can do about gun violence -- and what we can't.

In 2008 and 2010, the Supreme Court held that the Second Amendment protected individual Americans' rights to own guns. Put another way, here's what that means: You know how you can travel from state to state? Or use contraception? Or have a jury trial if you are charged with a crime? You can own a gun, too. Or two. Or four.

According to the Supreme Court, because James Holmes was not a convicted felon or identified as mentally ill, Colorado could not prevent James Holmes from legally buying at least three of the four guns he allegedly used in Aurora on Friday night. He could keep the guns in his apartment. He could hold them in his hands, and watch violent movies, and fantasize about shooting people dead with them. Sure, he couldn't necessarily conceal them, and he certainly couldn't legally commit a massacre with them, but the Supreme Court guaranteed his right to acquire them -- and, of course, acquisition is nine-tenths of the game if what you want to do is shoot up a movie theater full of fans cheering for a dark knight.

And so, based on what the Supreme Court says the Constitution says, here's what we can't do about gun violence: We cannot prevent the James Holmeses, or the George Zimmermans, or maybe even the Jared Loughners of the world from buying most types of guns. We can only arrest them after they use the guns in an illegal -- often fatal -- way.

But here's what we can do: We can elect a president who will change the composition of the United States Supreme Court.

After the decision in the Affordable Care Act cases, there has been a lot of speculation about whether the Supreme Court is influenced by the political lobby. That's a more complicated question than it might appear at first blush, but let's say for the sake of argument that the Court is aware of the political landscape and decides cases in a way that is fairly consistent with the majority view. If that is true (and some scholars have argued that the Court is rarely politically deviant), then the gun control issue has two very loud voices screaming to be heard: the pro-gun lobby, and the gun control lobby. Taking the "do the Justices care about politics" question one step further, if the Court cared about politics in 2008 and 2010, it could be argued that the pro-gun lobby resonated more loudly with the Justices, resulting in the Court's decision that the Constitution protected the rights of gun owners.

But if the next president were to replace, say, Justices Scalia and Kennedy, then the political arguments that the Justices "heard" could possibly be different -- if, that is, that president were to appoint Justices who saw the Second Amendment differently from their predecessors.

Sure, it's true that the Supreme Court rarely reverses itself within a few years' time, but, as scholars have long known, it does happen -- most often with changes in composition on the Court. As Eric J. Segall has written recently in Supreme Myths, in the past several years alone, the Court changed constitutional course on issues like late-term abortion and sodomy -- not because the Constitution changed, but because the Justices on the bench did.

And once the Court changes, it changes long-term. While presidents serve for four or eight years at most, Justices hold their seats for life -- in some cases, up to thirty-five years. President Jed Bartlet (OK, he wasn't actually president, but how we wish he had been) said, when confronted with the difficult decision of whom to appoint to fill a Supreme Court vacancy, "Filling another seat on this Court may the only lasting thing I do in this office."

And so what can we do to protect our little Batmen and Robins, kids like my nephews who might be at risk at school or at the grocery store, or, yes, at the movie theater? We can vote. We can get out the vote. We can support candidates who support gun control. 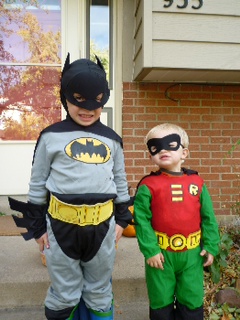 We can stop asking, "How could we let this happen" and make sure it never happens again.