Botched executions, inmate exonerations, lethal drug boycotts and admissions of prosecutorial misconduct -- in recent years opponents of the death penalty in the United States have been calling attention to serious concerns about when and how the state kills.

On Wednesday, the U.S. Supreme Court heard opening oral arguments in the closely watched case of Glossip v. Gross, which centers on the constitutionality of using the drug midazolam in executions.

The plaintiffs, all inmates on Oklahoma's death row, argue midazolam has no pain-relieving properties and "cannot reliably produce a deep, comatose unconsciousness" to ensure the inmate doesn't experience "intense and needless pain and suffering" when the paralytic and heart-stopping drugs are injected.

The state of Oklahoma argues that midazolam is humane and effective.

The court is expected to issue its ruling by early to mid-June, and how it will rule is far from obvious.

Oklahoma Attorney General Scott Pruitt told HuffPost via email: "Seven previous courts have considered the same facts that will be considered by the U.S. Supreme Court on Wednesday. All previous courts have ruled that the lethal injection protocol used by Oklahoma is constitutional. My office believes the U.S. Supreme Court, after considering these facts, will also find that Oklahoma's lethal injection protocol is constitutional and thus allow the sentences for these heinous crimes to be carried out in accordance with the law."

Fordham Law professor and death penalty expert Deborah Denno told The Huffington Post, "I find it very hard to predict what the court's going to do. I do think this is a court that's going to be much more educated in pharmacology and science and medicine than it was in 2008" in the case of Baze v. Rees.

It's "a statement in itself" that the court chose to hear the case in the first place, Denno noted.

How we got here

Currently 32 states have the death penalty, and all of them use lethal injection as the primary method of execution. For years, states used a fairly similar three-drug protocol in which the first drug, sodium thiopental (also know as sodium pentathol), was used to render the inmate unconscious, a second drug stopped respiration, and a third drug essentially induced cardiac arrest. In the 2008 case Baze v. Rees, which challenged that protocol, the court ruled in a 7-2 decision that Kentucky's protocol did not violate the Eighth Amendment barring cruel and unusual punishment.

Nevertheless, drug manufacturers decided either to stop selling sodium thiopental to prisons or to stop making the drug altogether, forcing departments of corrections to look for alternatives.

Eric M. Freedman, a professor of constitutional law and history at Hofstra University, told The Huffington Post Tuesday that in the wake of Baze, a patchwork of protocols sprang up where there previously had been just one.

Now many states use midazolam as part of a three-drug protocol. Other states, like Georgia, have started using lethal doses of the barbiturate pentobarbital on its own.

"Baze was a spectacular failure because [the court] didn't provide clear guidance to anyone," Freedman said.

In states like Oklahoma that have a three-drug protocol, the controversial sedative midazolam is the first drug deployed. It was used for the first time in 2014 in the botched execution of Clayton Lockett.

"The case is a very narrow case," said Dale Baich, one of the attorneys for the plaintiffs. "We're simply asking the U.S. Supreme Court to rule that states cannot use midazolam as part of the lethal injection protocol."

"If we're successful in the Supreme Court, it doesn't mean that lethal injections cannot go forward," Baich said. "Oklahoma can purchase pentobarbitol. Since a stay was issued in our case, Texas and Missouri and Georgia have all carried out executions using pentobarbitol."

If the court's opinion is broad, however, it could ripple out to other states, according to Rick Halperin, a death penalty and human rights expert at Southern Methodist University.

"The decision has the potential to affect other states' protocols, even if they have a different one from Oklahoma," Halperin said. "It depends on if the order is narrowly applied just to Oklahoma or more broadly." 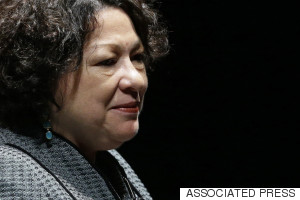 Justice Sonia Sotomayor at the University of Delaware, in 2013. (AP Photo/Patrick Semansky)

"We have four justices who are pretty fed up with the way things are going," Denno said, "but even [Justice Sonia] Sotomayor's dissent in the stay [for Oklahoma inmates] was a narrow dissent. It seems pretty clear than Kennedy is going to be the swing vote."

Denno suggested that evolving public opinion about the death penalty could also be an X-factor.

"We always know the justices are looking at the surveys, the reports. They're factors we know the court considers, but how much they weigh them is an open question," Denno said. "The court certainly isn't immune to what's happening in the public sphere, and they're not supposed to be."

Another figure to watch will be Oklahoma's expert witness, Dr. Roswell Lee Evans. Though doctors are ethically barred from participating in executions, Evans has previously offered testimony that inmates "would not sense the pain" of an execution after receiving a large dose of midazolam.

Sotomayor is likely to have some of the strongest opinions on this score. She wrote previously she was "deeply troubled" by Evans' research, which she criticized for not citing any case studies and for appearing to rely heavily on the website Drugs.com as a source.

Abolitionists who hope the court will strike down the death penalty entirely will almost certainly be disappointed by the ruling: All the experts interviewed by The Huffington Post agreed that SCOTUS tends to write its opinions narrowly and is unlikely to address any wide-ranging questions about the death penalty.

"Technically the court could make the opinion so broad that it would get rid of the death penalty," Denno said. "The court isn't going to do that."

Freedman said the court has an interest in ruling narrowly if they want a consensus.

Halperin, for his part, thinks Glossip v. Gross will be a small but nonetheless meaningful step toward the eventual elimination of the death penalty in the U.S.

"It took 17 years -- from 1988 to 2005 -- for the court to see that executing juvenile offenders was wrong. It took 13 years -- from 1989 to 2002 -- for a pro-death penalty Supreme Court to decide executing someone with mental disabilities is wrong," Halperin said. "We're now at a point where a lot of people can really see an end to this."