WASHINGTON -- Any day now, the Supreme Court is going to hand down a major decision on same-sex marriage. And when it does, and if it rules in favor of marriage equality, as many observers expect, there's going to be one hell of a party outside.

But in the days leading up to the court's decision -- it could come Thursday, Friday or next Monday -- it's been a quieter affair. The front steps are empty. There are no lines wrapping around the corner of the street. Even on days when the court has been in session, when there's a chance the same-sex marriage decision could happen, rumors of the ruling being put off until late June have been enough to keep most people away.

There is a small group of people, though, who have been coming on those days, too. Some have waited in line for hours every day the court has been in session this month. For them, it's not just about wanting to be in the chamber to witness history. It's far more personal.

Jim Obergefell is one of those people. He flies in from Cincinnati once or twice a week to wait in line when the court is in session. He's usually the first person in line, too.

"It gets to be a little tiring, but you know, it isn't bad," he told The Huffington Post on Thursday, standing at the front of the line that day. "It's just in and out, in and out."

The decision that Obergefell and so many others are waiting to see will answer two questions with huge implications for the lesbian and gay community: Does the 14th Amendment require states to issue marriage licenses to same-sex couples, and does it require states to recognize same-sex marriages performed in other states?

If they answer yes on both counts, same-sex marriage will, for the first time in the United States, be federally recognized as exactly the same as heterosexual marriage.

It's a nerve-wracking period of waiting for gay and lesbian people everywhere. But for Obergefell, it's especially intense: the case before the court is Obergefell vs. Hodges, as in he's the one who brought it.

"From the moment the Supreme Court accepted our case, and even being here for oral arguments, I wasn't really nervous," he said, smiling but wringing his hands as he talked. "But on Monday, the nerves started. They're still here and they're cramping up each time. This could happen today. It could all be over." 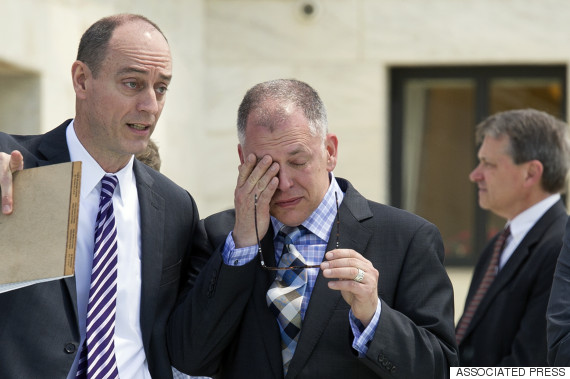 Obergefell's story is heartbreaking. He sued his home state of Ohio in 2013 for discriminating against same-sex couples who were lawfully married in other states. His partner, John Arthur, was dying from amyotrophic lateral sclerosis, or ALS, and they were trying to get the state to recognize Obergefell as his surviving spouse on his death certificate, since they were legally married in Maryland. Arthur died three months into their suit. After split decisions on their case in district and circuit courts, Obergefell made it to the Supreme Court this year.

He's been missing a lot of work because of his trips back and forth to D.C. He's a real estate agent, and said he's fortunate that his business partner has said she will do whatever she needs to do to manage business while he's away. Asked how he thinks he'll react if the court rules in his favor, Obergefell said there will be tears, and he may "jump up and down and scream" in the courtroom. Internally, of course.

"I want to open a bottle of Champagne to celebrate, because that's what John and I always did," he said. "We loved anything with bubbles. And I'll toast to John."

Further back in line behind Obergefell were Justin Chappell and his partner, Ben Spangenberg. They've been driving to the court every day it's been in session this month, and said they plan to keep coming until the marriage equality ruling.

"We're getting married on Nov. 1," said Chappell. "My father's family is in North Carolina, so this is really important to me. I want to be able to get married in North Carolina and not lose my rights and the dignity that comes along with marriage."

Chappell and Spangenberg live in Silver Spring, Maryland, where same-sex marriage is already legal. It's also legal in North Carolina, but their marriage there wouldn't be recognized in a number of other states.

"There have been times where one of us has gotten injured and had to go to the hospital. It's always an awkward question -- 'How do you know each other?' -- so you can stay there beyond visiting hours," Chappell said. "We just say that we're family."

Spangenberg said they wake up at 5 a.m. every time they make the trek to D.C. Since they both work from home, it's been relatively easy for them to keep coming back.

"If we decide to move or just visit a place that doesn't have same-sex marriage, that can really affect our lives," he said. "It's also just a momentous occasion. We decided we had the time, so we wanted to come down and see this."

John Dent of Fairmont, West Virginia, has also been making the haul to D.C. for each court session. He's getting used to taking the 5:12 a.m. train.

"It's history," he said, holding up a large camera in his hand. "I wanted to document it. The outside scene."

It's personal for Dent, too. He was in a relationship with a man for seven years. West Virginia is among the states that already have same-sex marriage, and Dent said, surprisingly, it's been a non-issue there ever since.

"Nobody's mentioned it since it was in the paper the day it happened," he said.

For some people, it's their job to wait in that line. Leslie Gabel-Brett is among them. She's the director of education and public affairs for Lambda Legal, which has had someone waiting to get into the court every day it's been in session.

"We're feeling pretty optimistic, but we don't want to predict until we know what it is," said Gabel-Brett. "We believe in equality for people across the country. That's something I've been working for my entire life." 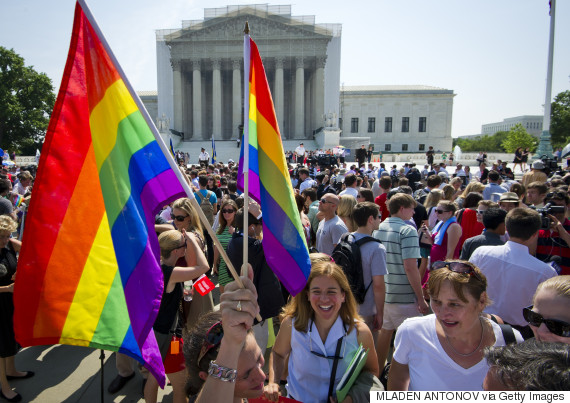 Gabel-Brett traveled to D.C. the night before from New York, where she lives with her partner of 36 years. It won't be immediate partying for her if the court backs marriage equality. She envisions days of Lambda Legal teleconferences and events, and focusing on getting information out to the community about what the ruling means. Somewhere in there, she said, she will find personal time to celebrate.

"There will be a lot of hugging and kissing," she said. "We can leave it at that."

Jason Hinson-Nolen of Indianapolis was in D.C. for a work conference but blew it off to come to the court, on the off chance it ruled on marriage equality that day.

"I heard rumors of today being the day, so I was like, if I'm in Washington, D.C, for lack of a better word, screw the conference," he said. "My colleague is sitting in sessions while I'm standing in line. It was an easy choice."

(Note: He later contacted HuffPost to clarify that he made sure someone was available to cover for him at the conference. He is a responsible professional.)

Hinson-Nolen said he worries about what it would mean if the court doesn't rule in favor of marriage equality. He lives in Indiana with his fiancé, but Hinson-Nolen is from Tennessee, which doesn't recognize same-sex marriage.

"If we get married in Indiana, we can't go back to Tennessee," he said. "My partner is a resident physician, so if he needs to move, we will have to move. Question No. 2 of the case [about states recognizing legal marriages in other states] is very important to me."

Hinson-Nolen got to meet one of the Supreme Court justices, Ruth Bader Ginsburg, a few weeks ago at an event he attended with a friend. He resisted asking her about the marriage equality case, partly because, he said, "there's a level of respect where you don't ask judges questions like that" -- but also partly because he was mesmerized by her.

"When she came into the reception we had, there was like this force field around her. No one got close to her. She was just kind of standing there, taking questions," he said, comparing her to a human version of Yoda.

"There was like a blackout moment where I don't know what I said," he added. "It was a magical experience."

CORRECTION: A previous version of this story stated incorrectly that same-sex marriage is not legal in North Carolina. It is legal there. The story also stated that Jason Hinson-Nolen and his partner were both from Tennessee. Only Hinson-Nolen is from that state.