The Supreme Court ruled in favor of nationwide marriage equality on Friday, releasing a majority opinion that suggested their decision was about more than just a rigid interpretation of the Constitution. While Justice Anthony Kennedy delivered an opinion that referenced plenty of legal precedent, he also injected language that spoke to the emotional weight this issue carries for millions of people across the nation.

It stood in stark contrast to the four justices who opposed gay marriage, each writing their own dissent to express their disapproval with the ruling and describe how they believed it was a gross misreading of the law. Justice Antonin Scalia's in particular read like a temper tantrum on paper, as he chastised his colleagues who supported marriage equality for mounting a new "threat to American democracy."

Kennedy, on the other hand, made clear that the majority believed this case to be a fundamental matter of equality, both of legal rights and of love.

"But the petitioners, far from seeking to devalue marriage, seek it for themselves because of their respect -- and need -- for its privileges and responsibilities, as illustrated by the petitioners’ own experiences," Kennedy wrote. "Decisions about marriage are among the most intimate that an individual can make. This is true for all persons, whatever their sexual orientation." 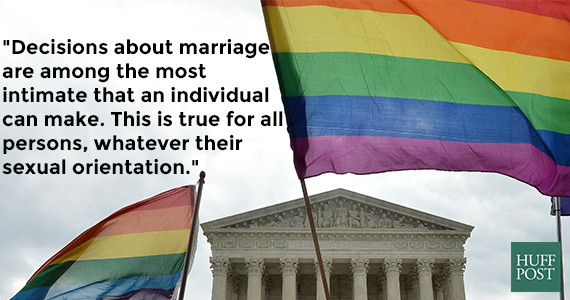 Kennedy spoke to the burden placed on gay couples by refusing them the right to marry.

"States have contributed to the fundamental character of marriage by placing it at the center of many facets of the legal and social order," he wrote. "There is no difference between same- and opposite-sex couples with respect to this principle, yet same-sex couples are denied the constellation of benefits that the States have linked to marriage and are consigned to an instability many opposite-sex couples would find intolerable. It is demeaning to lock same-sex couples out of a central institution of the Nation’s society, for they too may aspire to the transcendent purposes of marriage."

These harmful effects also were passed down to the children of same-sex couples, Kennedy noted. And for the majority, the time to right these historical wrongs was now.

"While the Constitution contemplates that democracy is the appropriate process for change, individuals who are harmed need not await legislative action before asserting a fundamental right," Kennedy wrote. "Bowers, in effect, upheld state action that denied gays and lesbians a fundamental right. Though it was eventually repudiated, men and women suffered pain and humiliation in the interim, and the effects of these injuries no doubt lingered long after Bowers was overruled. A ruling against same-sex couples would have the same effect and would be unjustified under the Fourteenth Amendment. The petitioners’ stories show the urgency of the issue they present to the Court, which has a duty to address these claims and answer these questions."

Kennedy's official opinion continued on in this fashion, retelling the stories of plaintiffs who had suffered because their marriages were not viewed equally under the law. Kennedy tracked the evolution of marriage over time, writing that it had "strengthened, not weakened, the institution." But society's treatment of the lesbian, gay, bisexual and transgender community was slow to evolve with it, he wrote, noting routine persecution and denial of rights to LGBT people. Kennedy then listed a number of past court cases that dealt with the issue of marriage, and explained why they applied to the issue of same-sex marriage as well. 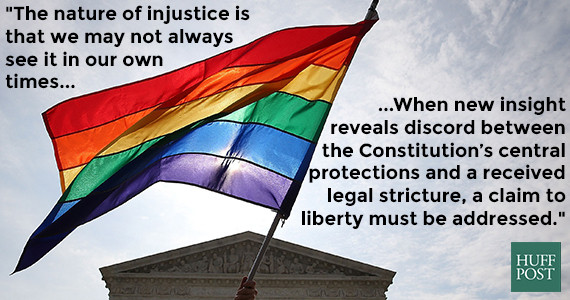 "The nature of injustice is that we may not always see it in our own times," he wrote. "The generations that wrote and ratified the Bill of Rights and the Fourteenth Amendment did not presume to know the extent of freedom in all of its dimensions, and so they entrusted to future generations a charter protecting the right of all persons to enjoy liberty as we learn its meaning. When new insight reveals discord between the Constitution’s central protections and a received legal stricture, a claim to liberty must be addressed."

Kennedy also got into the meaning of marriage and why it's so important.

"Marriage responds to the universal fear that a lonely person might call out only to find no one there. It offers the hope of companionship and understanding and assurance that while both still live there will be someone to care for the other." 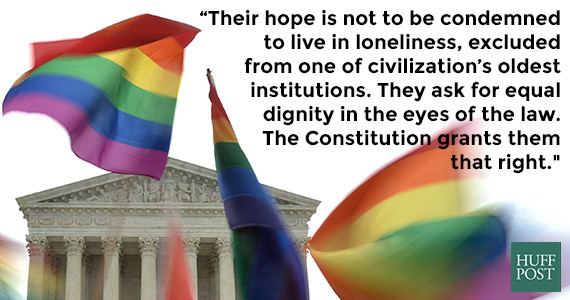 To top it off, he ended with one of the most ringing endorsements for marriage, gay or straight, that has ever been written.

"No union is more profound than marriage, for it embodies the highest ideals of love, fidelity, devotion, sacrifice, and family," Kennedy wrote. "In forming a marital union, two people become something greater than once they were. As some of the petitioners in these cases demonstrate, marriage embodies a love that may endure even past death. It would misunderstand these men and women to say they disrespect the idea of marriage. Their plea is that they do respect it, respect it so deeply that they seek to find its fulfillment for themselves. Their hope is not to be condemned to live in loneliness, excluded from one of civilization’s oldest institutions. They ask for equal dignity in the eyes of the law."

He concluded, "The Constitution grants them that right. The judgment of the Court of Appeals for the Sixth Circuit is reversed."