When small baby turtles started to crawl over on my shoes on the shore, some falling, some barely raring to grip, I knew there was something they were drawn towards. Was it the white color of my shoe that they had mistaken for the reflection of the moon on sea, or had they mistaken it for photo plankton, which they are attracted to? I barely moved an inch, holding my breath until they slowly descended and crawled, fast and clumsily towards the sea, 50 of them together. The sight was rare. Turtles, as we all know, make enjoyable pets, but watching the sea turtles crawl from beneath the surface of sand, popping out in synchronicity one after the other, in the shore they consider the most safe, is a blessing we all should, once in a lifetime, be part of. 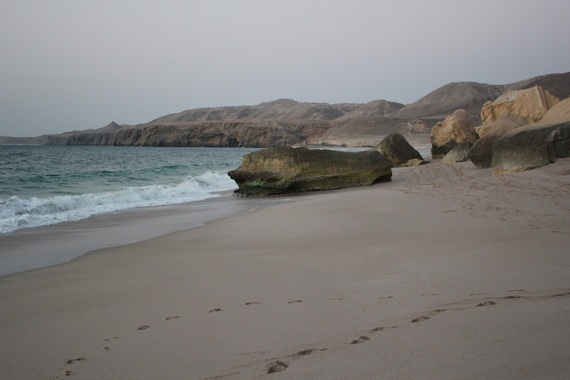 The home to the turtles is indeed mesmerizing

Archaeological exploration of Ras Al Jinz in Sur, Oman began following an accident discovery of Bronze. Since 1996, Ras Al Jinz Turtle Reserve is the biggest nesting site in the Indian Ocean, and has 99 percent of the world's Green Turtles. Divided into vast stretch of beaches, labelled A and B in the high season, 80-100 can be spotted every day. The turtles come out with the high tide in the night, and go away by the day. We stayed in their campsite where the sea was a walking distance. It is said that the whole life of sea turtles is spent in the vast eternities of sea, except the time when they give birth. 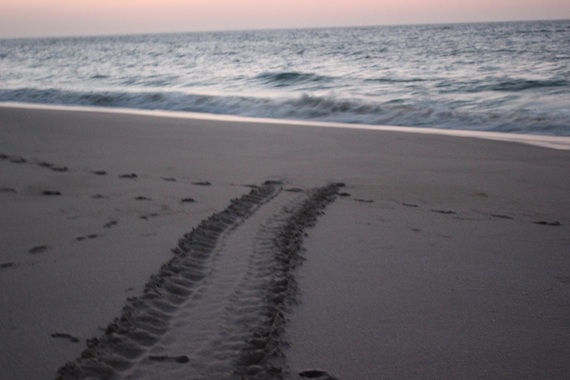 The footprints of green turtles, which moved back to the sea last night

We spotted five Green Turtles, one of them laying 100 eggs just in front of us in about 15-20 minutes. They then use their flaps to cover the egg pit and move to an alternate pit so that the natural predators, like foxed and crabs, are deceived regarding the location of hidden eggs underneath the sand. It is strange that then the sea turtles move back to the sea, and have no connection with the eggs. The eggs take 60 days to hatch, and the baby turtles are then on their own. More than 50 percent of them do not survive, due to predators, and those who do feed themselves on plankton and small fishes.

As the chances of spotting the turtles were more at night than the day, we couldn't spot any during daytime. But the sunrise on the beach was breathtaking. Oman has beautiful beaches with white, golden and black sand in the backdrop of limestone and lava mountains. What makes it more spectacular is the presence of living organisms, like turtles, which regularly make it their home. 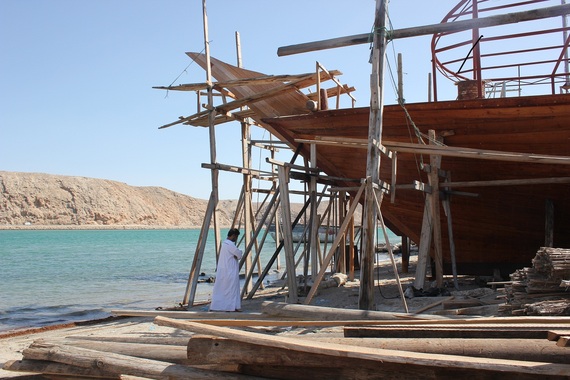 The land of Sindbad still has the old traditional dhows running in the sea!

Besides the turtles, the dhows made of teak wood and acacia wood in the Dhow Factory make Sur is an interesting experience. Dating back to the techniques of making during the Indian Ocean Trade, nothing much has changed in this part of the world. The carved windows and doors on old arabesque houses in Sur adds to the traditional theme of being that Oman swears by. These dhows are now used for Sailing competitions, fishing and exports. It transcends you to the time when Sindbad was a legend, and you feel great to be part of the place which stays true to its character and flavor. For me, it was my own journey of uniqueness to the land of turtles and dhows.

More:
travelOman
Newsletter Sign Up
An essential daily guide to achieving the good life
Subscribe to our lifestyle email.
Successfully Subscribed!
Realness delivered to your inbox