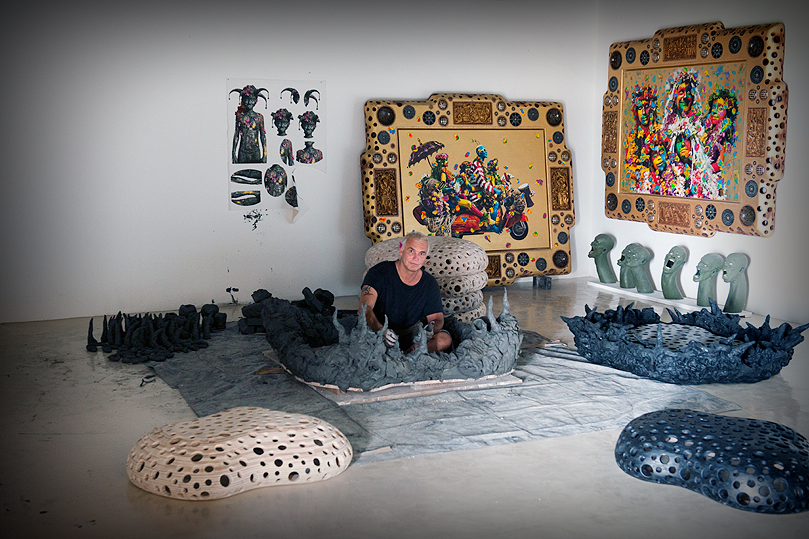 Ashley Bickerton photographed at his studio in Bali by Bobby Fisher, 2011

Ashley Bickerton has darkened his timbre after carousing the neon-lit nights of Pan-Asian hotspots. He says that he's entered a new phase - his kids have grown, he's newly separated, and as such, work follows life. He tells me that a while back it was filled with: "Pregnant wives and giggling babies. My work was full of sun-dappled, sparkling, turquoise blue waters, beauty and optimism. And somehow, now we are in this dark neon wilderness."

Bickerton, who has been in Bali for 17 years, has for sometime been documenting that life in the nexus of tranquil beaches and rapacious megacities that spike the world's coastlines. His art is a collision of cultures, peopled with the migrant archetypes that spawn the sun-bleached shores typical of Bahia, Goa, Ibiza, and in his backyard, their Thai and Balinese replicants. Gluttonous tribes of tourists, screaming banshees with neon skins snake across canvases splashed with iridescent colours in toxic contrast to nature's paradisiac beaches. 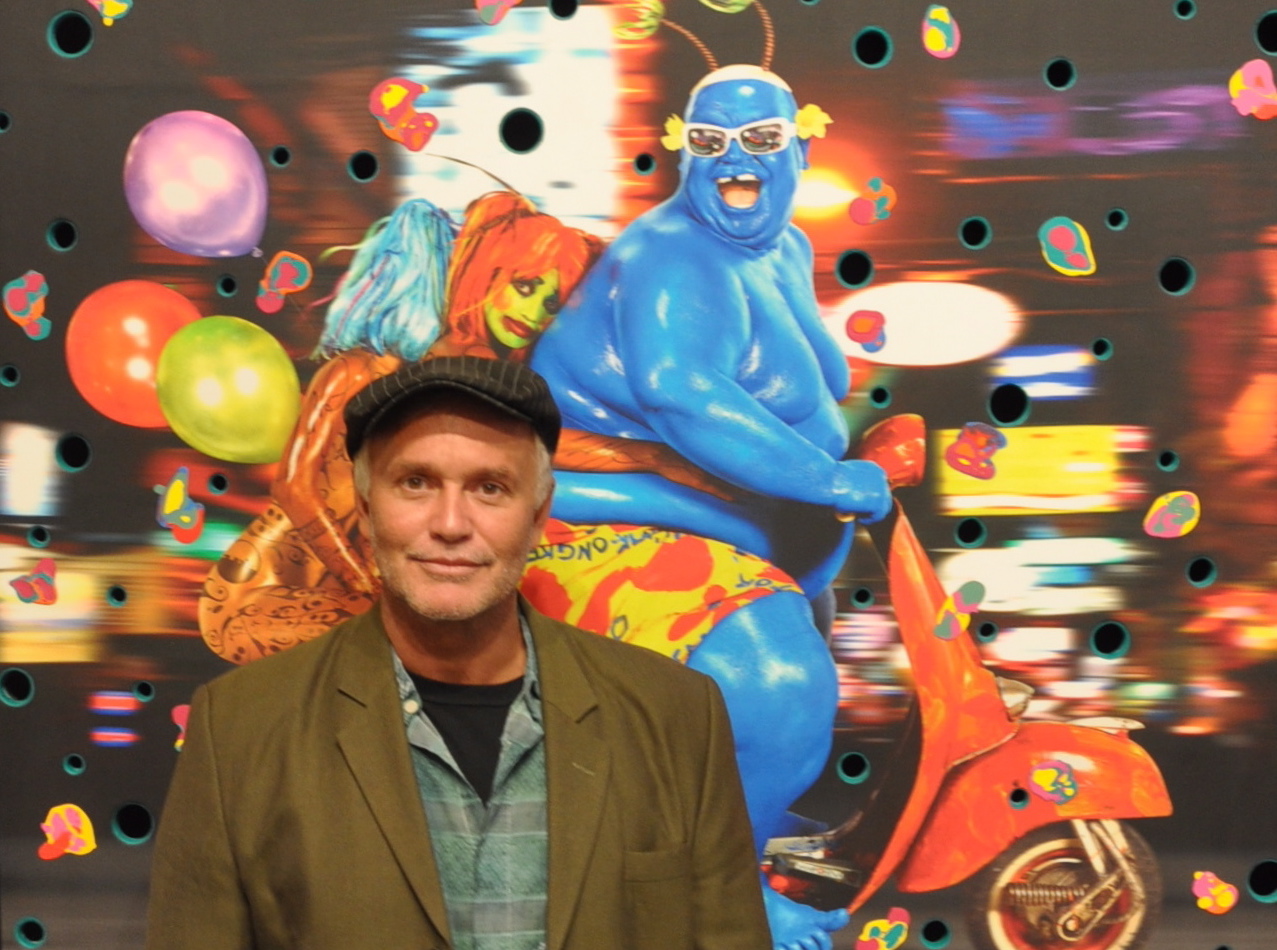 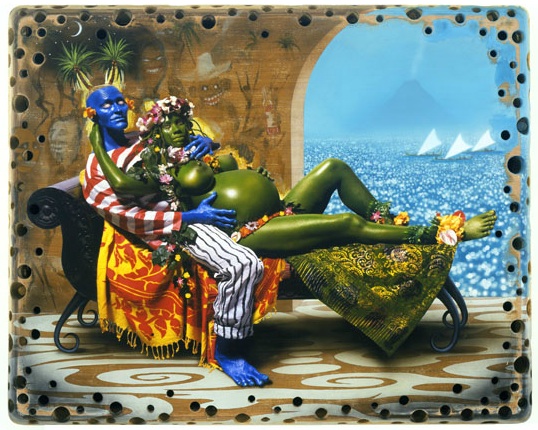 In this new world, the white man's vision of romantic primitivism is taken for a spin by the dragon-lady's daughter. There's no victim or seducer in this tango. The garlanded belles belie their dark junkie sides. Bickerton parodies the tropes of island-exotica, unlike the other Tahitian tourist, the 'syphilitic sarong-wearing euro-trash degenerate' painter who we won't make gratuitous mentions of here. "I live in a far too complicated world down there. Tourists aren't western or eastern. It's not the time of Kipling anymore. My kids are different races."

It's not the world of Raffles or Maugham and martinis in Macao either. With two wayward teens, he's peeked into the wild side. "It's terrifying down there. A friend of mine sent me a text on the kind of drugs they were taking, a popular concoction was Xanax, Red bull, vodka and some sort of ephedrine or something," recalled Bickerton, describing the elixir du jour. 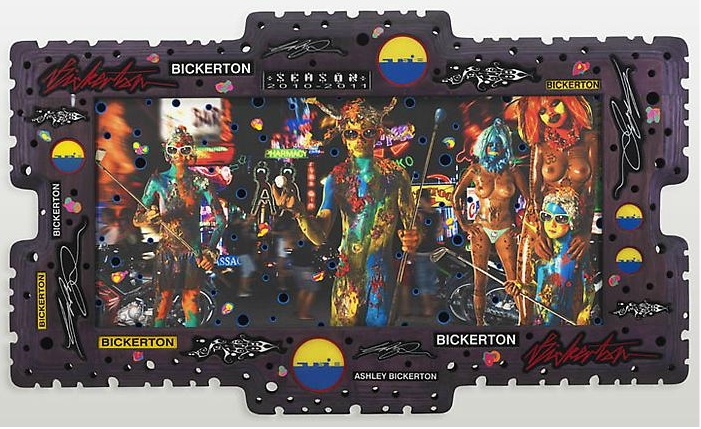 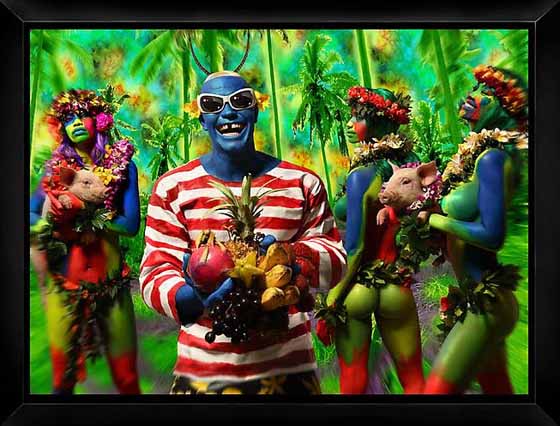 But far be it for me to suggest some of his characters look like they are plugged into life through something special; speed freaks in a neon-scripted wasteland-wonderland. "It's like an Edith Piaf song - and she's wailing away and it's beautiful and mysterious and evocative, and suddenly you go online and try to translate it into English, and it's like, ooh baby, baby, yeah, I miss you baby, and you go, oh god...And I don't want to know what things mean. I don't want to know what my own work means. If it gets nailed down in fluourescent lights on a white formica slab in the lab, it's no longer art, it's science. Art has to somehow flitter in the half-light, in a sort of phantasm, just out of reach."

"I don't really want to know if these kids are tricking or are on drugs. Probably. They're too young. Decidedly too young. I don't know if they're street urchins selling themselves, or if they're middle-class adventurers just out on a tear. I do know that I love all those pictures from Woodstock or Burning Man festivals where people step outside their daily lives. End up covered in mud, or crap, standing around smiling with their arms around each other."

The exuberance of pigments in the Indian festival of Holi is another inspiration. It's tribalistic, it's organic; it's a stepping into the earth. 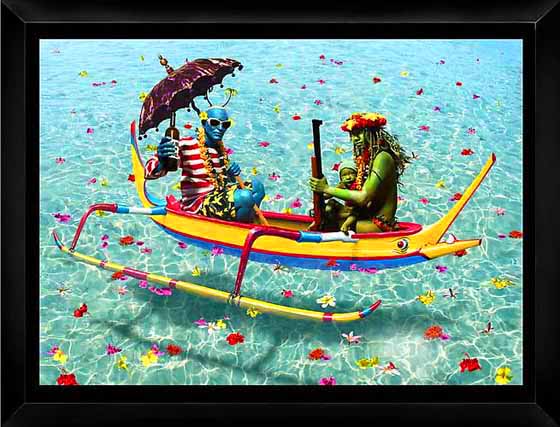 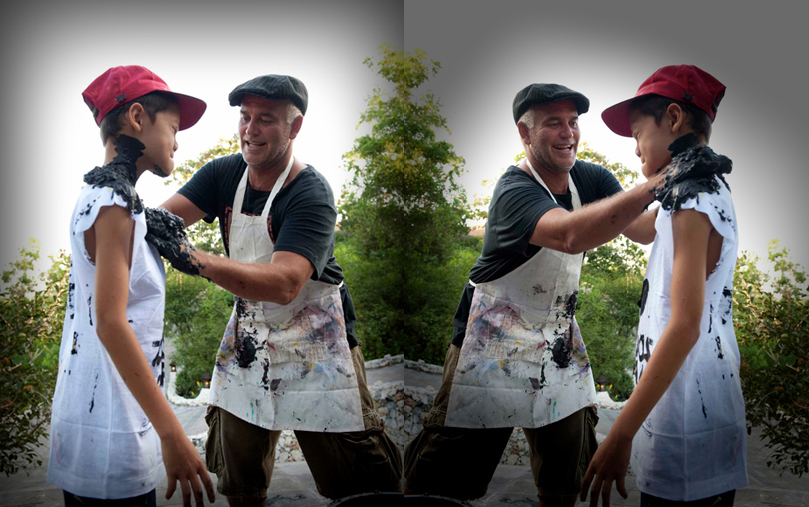 Ashley Bickerton photographed in Bali by Bobby Fisher, 2011. Fisher says, Bickerton's process was open and frenzied, that he was "barefoot, manic, concentrated". 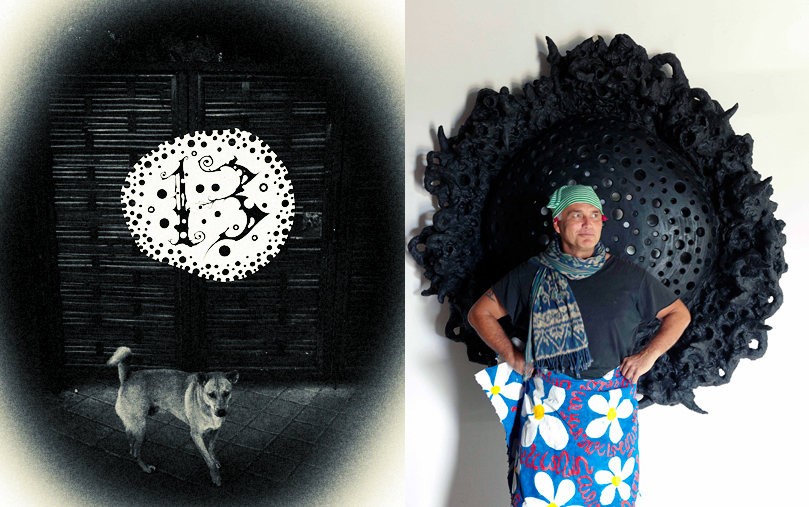 Ashley Bickerton photographed at his studio in Bali by Bobby Fisher, 2011

I imagined it was stunning at his cottage near the Bukit peninsula in Bali...?

"The thing is I don't go anywhere because of traffic." He tells me that the surf is good, but his wave is now a mecca for tourists.

Surfing is still an inspiration and Bickerton celebrates the pomp and ostentation of stickers and tagging that glorify surfboards. But apart from the crafted frames there isn't any reference in his newer works to the natural side of Bali. It's more human ephemera. "Well, this is National Geographic!" he quips. "I get asked about the indigenous material I put it on - for me all that Bali chachka tourist stuff, is just that - it's bombast, hyperbole."

Bickerton's art is figurative and digs deep in emotional gore; it's a swan dive from the en-vogue asceticism of contemporary art, and he suggests a kind of inversion of Allan McCollum's spartan aesthetic with his paintings spilling over in visual diarrhea onto his driftwood styled, logo-pocked frames. Working with clay is enjoyable because it is earthy and fecal. "When I'm making frames, it is all sweat because it's all done in clay. I make holes in the clay, [he shows me it's done with one finger or a double finger] and funnily, my assistant was helping...and then the maid came in - we were bent over sweating..."

"There's something physically sexual about pudendas and holes," he explains to me. If you are grabbing a Bickerton frame you may well find your fingers in a compromising position.

Bickerton, Bickerton, Bickerton scream the tattooed, tagged sex-charged women with fetishized skins stamped like LV hand luggage. "These girls are hybrids, with complete Bickerton logos all over. Stamped chattel. I like it because it's so wrong. I like the belief that I could be wrong and that my whole life could be wrong. But if you know what you're doing, and you are unabashedly wrong in so many ways, then you are actually stimulating dialogue as opposed to just being an asshole."

"It goes back to my 80s work," he explains, referencing earlier works where he suggested the value of art is often set by the mystique of its author. "The time and place it's made. Picasso 1914 has a certain value - doesn't really matter whether you have a bad piece by a major artist and a good piece by a not-so-well-known artist. The name branding thing, it's been taken to it's extreme with the Koons-Murakami-Hirst phenomena in the last decade or so." 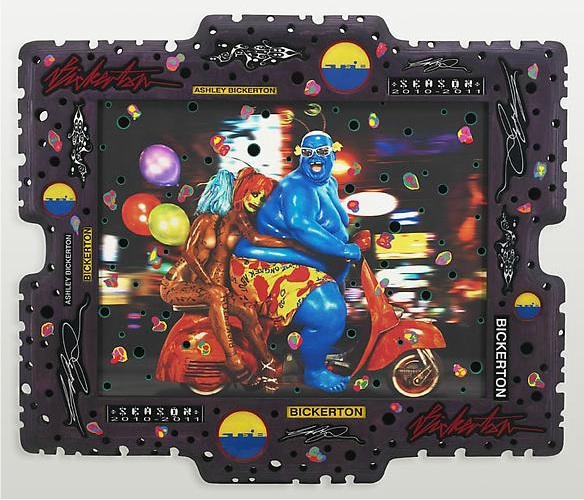 Bickerton's alter-ego is the blue-man. Once he was his own model for the 'blue man', he now uses a heftier muse, Jimbo Pellegrine, who projects a mental-state of intoxicating danger and glee.

I wondered, why have a fixed character at all? It's once removed from a purely autobiographical gesture. When Genet describes his longing for a lush piece of ass, his words drip with undisguised lust. But Bickerton deconstructs desire, and for him it represents, "The twentieth century man, escapee from the future, an existential anti-hero...loaded with clichés in his Picasso shirt." This debauched character absorbs all the occidental stereotypes that had been the elephant in the room. Literally so, this big bundle of bacchanalian excess, his new muse, at 350 lbs, also happens to be a graceful surfer. "I was playing a role, he doesn't have to. He is bent." Surprised that he could stay float on the board I had to check him out. Watch him surf a tube here:

Bickerton sets up the scene, paints their bodies then stitches it back into another reality in Photoshop. It's a painting of sculpture. The bimboesque girls with bouncy-butts are flavours of the exotic orient, the two entwined in an amoral tryst. "Did I get her face right? I spent a long time in Photoshop - it's not fear. I wanted a bit of apprehension. A bit of like, where is this going to lead? Naughty excitement."

Anti-septic steroid-driven porn pushed by western internet media can make its way even into a Masai's hut. I ask Bickerton if he is exploring the difference in the way these two people approach sexuality. "I am very interested in the meeting of those two worlds. The clashes. The worlds cannot mix in so many ways but when it comes to sexuality and money they dive deep into each other," says Bickerton. He says of Paul Theroux's The Elephanta Suites "He always brings sexuality into it, and how it's complicated by other cultures. What mixes and what doesn't and the possible misinterpretations. He might have a more moral reading, although maybe not..."

"I went down to Pattaya to shoot," Bickerton recalls, "I basically shot every neon sign in Thailand. The most dense-packed tawdry low-budget neon alleys from hell - one giant eleven km long monument to mid-life crises. Hairy-armed old farts in their singlets bent over their beers at ten in the morning with an ageing, over-the-shelf tart bouncing on their knee. I forced myself to stay - I hated Pattaya passionately. On the other hand I liked Bangkok."

He pauses, musing about the way it might be read, and adds, "I am not a documentarian, I did not capture these people about to do it; it's a set up. It's a picture, it's humour." He continues with a wicked grin, "I am completely amoral. How can it be wrong, when it's so funny?" 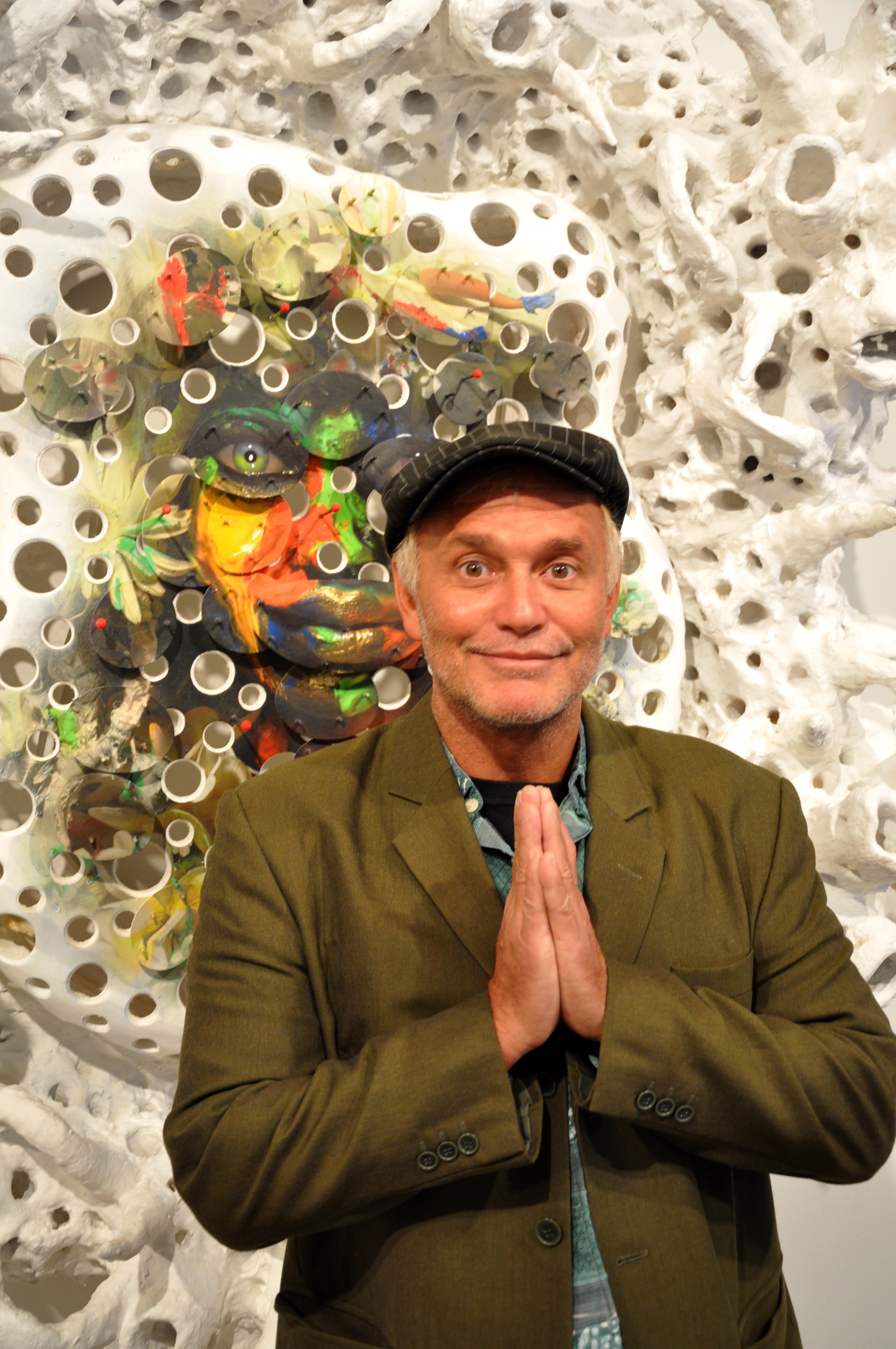