I've wanted to surf my whole life, which is ironic considering I was raised in upstate New York, could hardly swim and was terrified of putting my face in water. Yet I had dreams of riding a wave and enjoying every minute of it. 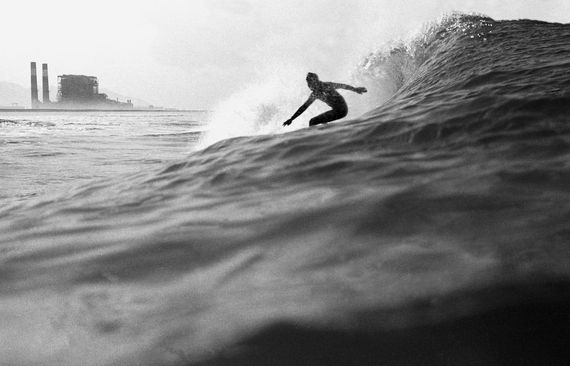 I'm a runner and a biker; swimming is not in my vocabulary. So I knew that if I were to make this dream a reality, I'd have to take it one step at a time. I made a three-year plan, and step-one was... adult swim lessons. Adult swim lessons are everything you would expect them to be: embarrassing and exhausting. I had to do it though, in order to achieve my dream. It took months of practice, but I did eventually become more comfortable in the water. I even managed to enjoy it on rare days!

My next step was getting used to ocean water. The ocean is an entirely different beast than the serene and predictable swimming pool. I grimaced at the stinging salt in my eyes and nose; I panicked when I swallowed gulps of saltwater. Regardless, every time we went to a beach during this two-year period, I practiced swimming 15 minutes, upped it to 30 minutes, and then eventually swam for an hour in the ocean without gasping for air.

Once I knew how to swim, and could successfully swim in the ocean, it was time to book surfing lessons. I was as giddy as a child on her birthday! I couldn't sleep the night before my first lesson because I was so excited. The big day had come and I was actually going surfing with Girls Who Surf. 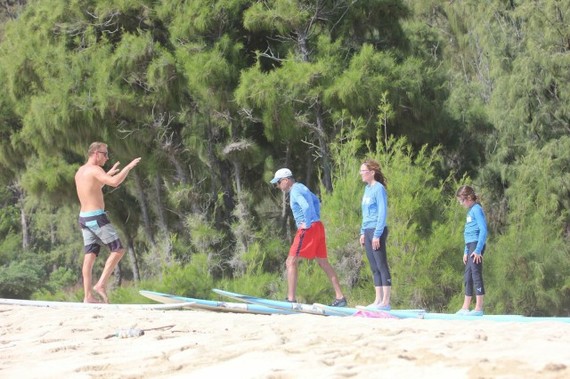 Of course my 9-year-old daughter popped up on her first wave, yet I didn't care. I'd stay as long as it took to ride a wave. 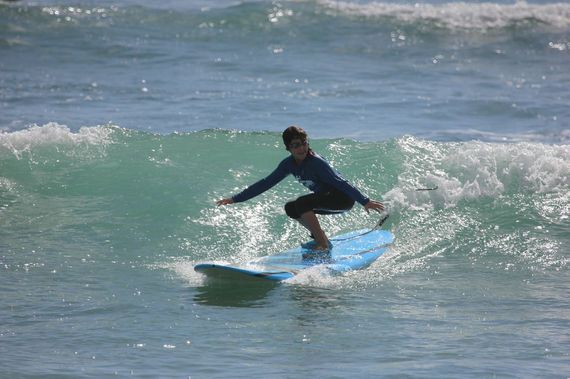 I finally caught the fifth wave; I was wobbly, awkward and about to wipeout, but I didn't care. I had done it! 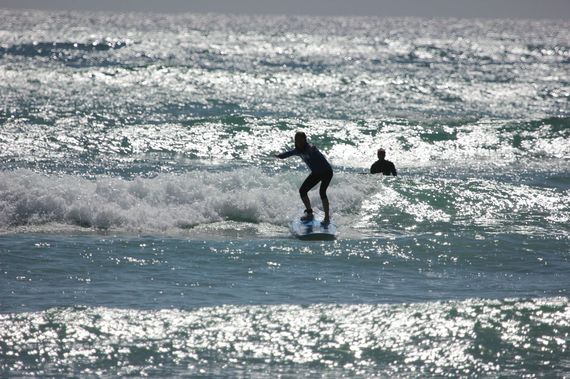 Over many lessons, I became stronger and more proficient. By my last lesson, I was catching most of the waves, riding them to the beach and even knew how to stop without crashing into the shore.

Surfing Lesson: At one point, I was surfing close to my daughter. Afraid that I'd run into her, I looked to my left to see how close I was to her and immediately wiped out. When my instructor asked what happened, I explained that I didn't want to crash into her. He explained that with my speed and trajectory, and hers, we wouldn't have crashed. Yet, because I looked left at her instead of staying my course, I actually slowed down and swerved enough that I lost my balance and wiped out. If I had stayed the course, I would have cruised past her. I tried his theory on my next wave and sure enough...I surfed right past her.

Leadership Lesson: While it's healthy to know your competition, don't become obsessed with their every move. If you have enough momentum, speed and direction, stay the course instead of looking over your shoulder all the time. If you stay your course, you may find you'll surf right past the competition.

Surfing Lesson: When surfing, you lie with your belly on the board and paddle in a freestyle motion with cupped hands to get out to the waves. When I let my mind wander while paddling, I hardly moved. When I paddled fast and shallow, I hardly moved. Yet when I focused on one arm at a time, paddling deep and with a cupped hand, I moved quickly. It was clear that I had to stay focused to get out to the next wave.

Leadership Lesson: When I coach CEOs and COOs, they often have "shiny object syndrome," which means they want to launch the next product before the first one is hardly scaled. I advise them to keep focused with their first product before diverting their resources to the next product. This way, they have the time and resources to develop their team and scale the business, both of which will provide a solid launching pad for what ever comes next.

3. Adapt To Your New Reality

Surfing Lesson: Our first day of surfing was full of big waves (relatively speaking). We'd paddle out, surf, paddle out, surf, paddle out and keep surfing. The day was full of adrenaline and laughs. However, on our next day of surfing, the waves barely rippled and came few and far between. At first we were all disappointed, expecting the rush of the first day's waves. My 20 year-old instructor gave me a reality check by saying, "Today the ocean is teaching us patience."

Once I adapted my mindset to my new reality, I decided that I was going to focus on technique--like going lower, turning tighter, and ending the ride more gracefully. I had just as much fun as the first day, while improving my ride, just by adapting to my new reality.

Leadership Lesson: In business and otherwise, even the best-laid plans can go awry. And when plans are off course, a good leader is able to pivot to a new reality. Not only do leaders need to pivot - they also need to help their team pivot when things aren't going as planned. 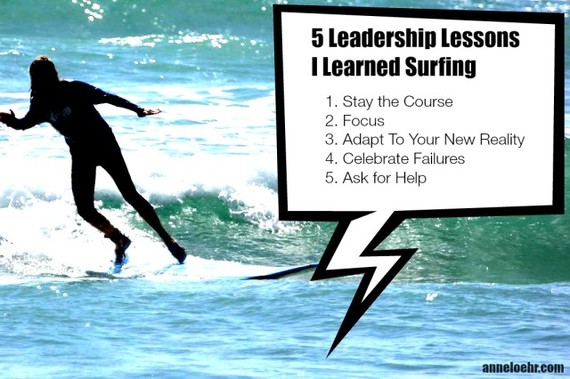 Surfing Lesson: Confession: My lessons were full of wipeouts. Yet every time I fell off the board face first, the instructors cheered loudly. At first I was surprised and a little frustrated, thinking they were laughing at me. It turns out they were celebrating my failures, because it meant I tried something new...whether it was "walking the nose' (walking up the board), doing a "180" (jumping a half circle on the board and landing on both feet) or crouching so low that my hands were the steering rudders on the board. In fact, they had a competition of who had the most "epic" wipeout of the day. My daughter held that title for a bit until I rightfully earned it when trying a 180. The best part...I was thrilled to be the winner because it meant I had pushed myself to try something new.

Leadership Lesson: Many organizations frown on mistakes, creating mistrust and lack of innovation. When was the last time you celebrated a misstep, empowering your employee to try again?

Surfing Lesson: When you have a surf instructor, they sometimes help you paddle or push you into the wave as it comes. At first I refused their help. Then I realized how silly I was being. Why in the world didn't I want help from professionals, many of whom had been surfing for 15 years? Why did I want to waste my energy trying to do everything, when with some help, I could focus on the surfing and let them push me in the right direction? Once I asked for help, my surfing became much better.

Leadership Lesson: Many leaders think they need to know it all, or they won't be respected. "My employees come to me for answers. I need to tell them what to do." Sure, that's correct if it's a matter of security or safety. However, if you want empowered employees, it's time to tell less and coach more. By coaching, you allow your employees to grow on their own by nudging them in the right direction. If your employees have to turn to you for every answer, they won't have the opportunity to develop their own skills.

Speaking of "adapting to your new reality," I have to say coming back from the white sands of Hawaii to the white snow of Virginia was a little rough. But what I brought back made me feel fantastic. Not only had I accomplished something I had always dreamed of, but I also learned unexpected lessons along the way that apply perfectly to leadership.

Do you have any similar experiences? I love to hear about the challenges others take on, and the lessons they learn along the way. Tell me about your journeys in the comment section below, send me an email or find me on Twitter.