UPDATE: 12:00-- That was a terrifying few minutes there, but everyone can breathe again. Surge was briefly sold out, but it's back in stock. Since this could go on all day, we advise checking the Amazon.com site to see if the soda is still in stock.

Everyone's favorite '90s soda is back and super fans are freaking out.

Surge, a popular '90s soda that was essentially Coca-Cola's take on Mountain Dew, is for sale on Amazon.com, and is Coca-Cola's first foray into "distributing a product solely through e-commerce." In an astounding display of the soda's popularity, Surge has already sold out once, and we're sure will do so again.

Known as the "fully loaded citrus soda," the fizzy drink was taken off the market in 2003 after making its debut in 1996. Now, thanks to the official SURGE Movement Facebook page -- the soda briefly made its return and might be here to stay for good. 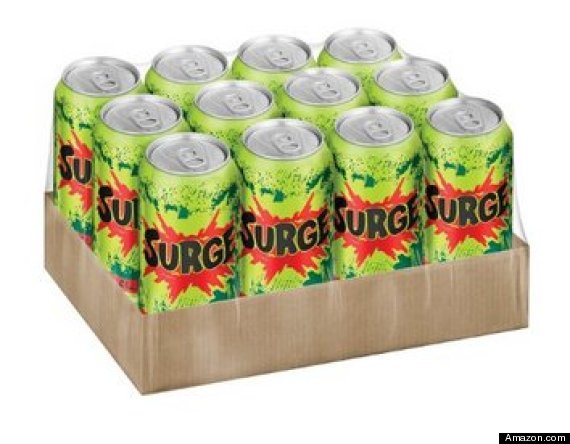 The SURGE Movement is a Coca-Cola fan group spearheaded by Evan Carr, Sean Sheridan and Matt Winans that has worked tirelessly for the past few years trying to get the famous soda back on shelves.

According to a Coca-Cola spokesperson, the soda could be back for good, but it all depends on the popularity of the comeback. “This is the ultimate test… we’re leaving it in the hands of SURGE fans,” said Racquel Mason, associate vice president of sparkling flavors, Coca-Cola North America. “Can 128,000 fans build and sustain a brand? We’ll see.”

A Student in India Died After Chugging 8 Cokes
While anyone would be likely to get a bad stomachache from drinking so many sugary sodas back to back, the rumor that a case of too much pop actually killed him is apocryphal. Photo Credit: Coca-Cola Click Here to see More Famous Coca-Cola Myths
A Tooth Left in a Glass of Coke Will Dissolve Overnight
While leaving a tooth soaking in any form of acid, no matter how mild, can't be great for enamel, the acids present in Coke are actually relatively mild compared to other common foods, including orange juice and regular vinegar used in salad. Photo Credit: Thinkstock
Coke Still Uses Cocaine
Nope. Coca leaves, sure, but cocaine? Not anymore. Yes, up until 1903, the popular soda contained cocaine, but the substance wasn’t even illegal in the U.S. until 1914. Photo Credit: Coca-Cola Click Here to see More Famous Coca-Cola Myths
The Company Is Anti-Semitic And The Company Donates Proceeds to Israel
Neither of these competing -- and mutually exclusive -- rumors are true. The company is not affiliated with any religion and does not discriminate against any groups. Photo Credit: Thinkstock
You Just Won a Sweepstakes You Didn't Even Enter
While the company does have various prizes and sweepstakes (currently, you can win a trip to the FIFA World Cup Quarter-Finals in Brazil), they have no part in the phishing scams that send you emails with subject lines like: NOTIFICATION OF THE ANNUAL MID-YEAR COCA-COLA PROMOTIONAL DRAW. In fact, the company has set up a website with a list of some of the many scams that have tried to profit off of Coca-Cola's good name. Click Here to see More Famous Coca-Cola MythsPhoto Credit: Thinkstock
More:
Taste surgecoca-cola

How To Do A Facial At Home By Yourself, According To Real Facialists