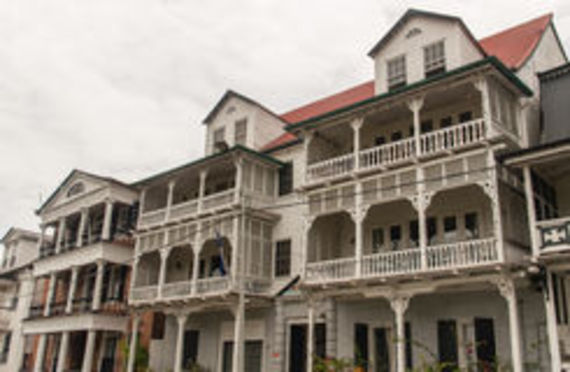 Suriname is facing twin - external and fiscal - deficits that originated in the commodity price slump of recent years. In response, the Surinamese government started a four-pronged adjustment program in August 2015 to adapt to new circumstances.

On the back of favorable commodity prices and appropriate domestic policies, the Surinamese economy grew at an average rate of 5% per year - amongst the highest in the Western Hemisphere - in the period 2003-2012. However, like other small commodity-dependent developing economies, Suriname has faced negative growth, external and fiscal deficits derived from falling commodity prices in recent years. The production of alumina, gold, and oil in the Surinamese economy accounted for 88% of exports and 40% government revenue in 2011. The global price decline of those commodities and the closure of the alumina refinery in late-2015 weighed drastically on economic growth (Chart 1). 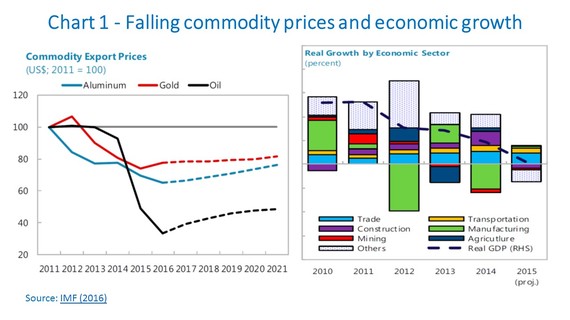 Suriname's current-account and fiscal balances have deteriorated (Chart 2). The fiscal balance moved from a small surplus in 2011, prior to the commodity price downfall, to a deficit of 8.8% of GDP last year, with the drop in government mineral revenue being responsible for 82% of that change (IMF, 2016). On the balance of payments side, the current account moved from a surplus of 5.7% of GDP in 2011 to a 15.6% deficit in 2015, although a larger part of the deterioration was due to a sharp increase in imports due to large investments in a new oil refinery and a new gold mine. 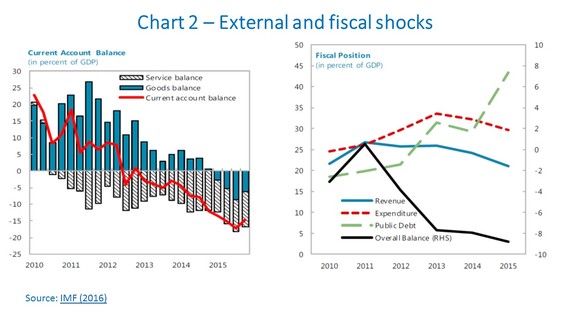 To facilitate the adjustment of the exchange rate to changing terms of trade, the government shifted from a pegged to a floating exchange rate regime in March 2016. To close the gap between the official and parallel exchange rates, the Central Bank of Suriname put in place a system of foreign exchange auctions (Chart 3 - left side). Similar to other commodity exporting countries, the local currency lost more than half of its value in dollars, and - together with some utility tariff hikes - was largely responsible for an inflationary spike (Chart 3 - right side). 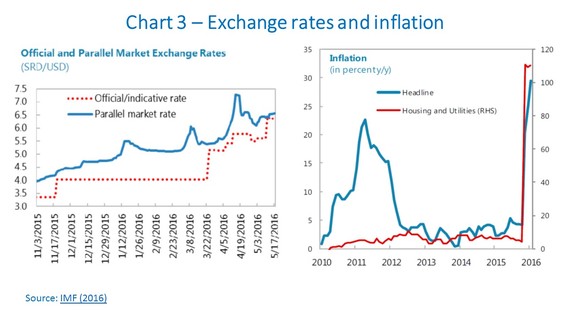 ... which are being faced with an IMF-supported four-pronged adjustment program

The government of Suriname took action to adjust to the commodity price shock and to lay the foundation to increase the economy's resilience to future shocks. The government designed its adjustment effort in 2015 and began its implementation in August 2015 with an immediate strong fiscal adjustment. To finance the transition, soften the adjustment path, and facilitate the implementation of the far-reaching structural reforms that the government outlined in its program, the government approached the IMF and other international organizations in early-2016. These efforts led to an agreement on a Stand-By Arrangement in May 2016 with the IMF (2016) - the first program of Suriname since the country joined the IMF in April 1978. Success of this program is anchored on four pillars.

The reestablishment of fiscal sustainability was a key pillar of the policy response that started in August 2015: through a combination of expenditure cuts and revenue increases, the government reduced the fiscal deficit from an annualized 12.5% of GDP during January-July to 3.5% of GDP during August-December. A key element of the adjustment was the reduction in electricity tariff subsidies, with a 52%average increase in electricity tariffs in November 2015.

The government adjustment program that the IMF agreed to support incorporates additional measures to reduce the fiscal deficit further to 1.4% of GDP by 2018. In order to reach those targets, electricity subsidies and existing exemptions in income taxation for insurance companies will be scrapped; fuel and sales taxes will be hiked; a Value Added Tax and a vehicle tax will be introduced - the former by January 2018 and the latter in the second half of this year; the wage bill will be restrained; and contingency measures will stand ready to be deployed if necessary.

Critical to increase the resilience of government finances going forward are the reforms to strengthen the fiscal policy framework. These include modernization of public financial management, procurement, revenue administration, and treasury functions and the establishment of a sovereign wealth fund to minimize revenue fluctuations stemming from commodity price swings.

Following the Surinamese tradition to maintain a wide social protection network and protect the more vulnerable, the government will improve social cash transfer programs focused on the most vulnerable. By the same token, the reform of electricity prices eliminates one of the most regressive subsidies as 92 % of the subsidies used to accrue to the 10% largest consumers.

Rebuilding foreign reserves to harness confidence and stability is a second pillar of the government program. This is to come with the multilateral and limited commercial financing, fiscal adjustment, and an expected improvement in the external current account resulting from the flexible exchange rate and a strong increase in gold exports as the large investments of recent past come on-stream. The government projects (and the IMF agrees) that the current account will move from a deficit of 15.6% of GDP in 2015 to at least a zero balance in 2017-18. Foreign exchange reserves are, in turn, expected to reach 4 months of imports by end-2018 and stay there afterwards.

Increasing resilience through exchange rate, monetary, and financial policies is a third prong of the program. In order to avoid the propagation of the inflation shock that followed the exchange rate depreciation and other relative price adjustments, domestic liquidity conditions are being kept tight by necessity.

Finally, structural reforms for diversification and improving the business environment have also been included as a fourth pillar. Several areas where the business environment can be improved in a relatively shorter time span have already been identified, including enforcement of contracts, investor protection, registration of property, trade facilitation, exchange restrictions, access to finance and others. Tapping the agriculture sector potential can also be boosted with an improvement of public services concerning plant health, animal health, and fishery sustainable management.

The government projects that the implementation of its adjustment and reform program will boost economic growth from -2% this year to 2.5% in 2017, taking into account the positive impact from the opening of a new gold mine, and to converge to a medium-term rate of 3%. Consumer price inflation will likely peak at 24% at end-2016 and decline to 6.1% by 2018.

That is a script in which Suriname can appropriately claim success in correcting its economic course after the drastic changes in the global environment. And the credit for the success should be given to the strong ownership of the Surinamese government, which designed the adjustment and reform program and began implementing it even before approaching the international community for its support, and to the Surinamese people, who understood the need for the adjustment and reform efforts to face the storm and have supported its implementation.