One of the most compelling vestiges of Hinduism's Transatlantic migration can be found in a tiny Dutch speaking country on the northeast tip of South America.

When I wrote about Caribbean Hinduism a few months ago, I focused primarily on the experiences of Hindus in Guyana and Trinidad. However, Suriname (formerly called Dutch Guiana), which borders Guyana, provides a great story of Hindu resilience and cultural diffusion.

The spread of Hinduism into the West Indies was driven mostly by British colonialism starting in the mid-1800s, but the Dutch only began bringing Indian and Indonesian indentured servants into their lone South American colonial territory in the 1870s. The workers were brought to work primarily on coffee and sugar plantations.

While much has been written about the brutality of Dutch rule in other parts of the world -- particularly what is now Indonesia -- during the colonial era, colonial authorities in Dutch Guiana did not impose significant restrictions on the cultural and religious practices of their indentured workers. As a result, Hinduism had a stronger retention rate among its adherents, the majority of whom were raised in Bhakti traditions. Arya Samaj also had a strong following, and a subgroup within the movement - Arya Dewaker -- was recognized as a cultural association by Dutch authorities in 1930.

Like in British Guyana, the Hinduism practiced in Dutch Guiana remained strong due to its importance to most Indo-Caribbean people. However, one thing that has been a notable difference is the retention of language among those who lived in the Dutch colony. Sarnami Hindustani, a dialect of Bhojpuri, is still spoken by many Indo-Surinamese, and the linguistic retention has helped the community maintain cultural traditions. This is largely due to the fact that the Dutch did not force the Indo-Caribbean population to abandon their native languages, unlike in British colonies like Trinidad and Guyana, where English was imposed as a means of attempting to erase cultural and religious traditions.

Suriname has been independent from Dutch rule for 40 years, and today, nearly a third of its population are Hindu. The Hindu community's cultural impact can be seen in cities such as the capital, Paramaribo, home to the world famous Arya Dewaker temple (pictured below). Moreover, Holi (Phagwah) is a national holiday, and Hindus and non-Hindus alike celebrate Diwali across the country. 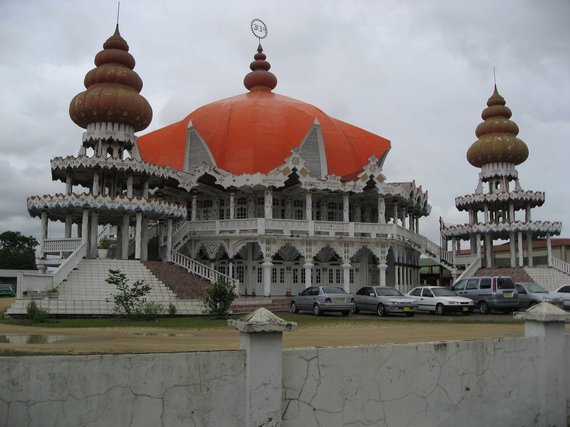 The impact of Suriname's Hinduism is also being felt in the country that once colonized Dutch Guiana. Thousands of Indo-Surinamese migrated to the Netherlands, where they have become acclimated in Dutch society. The majority of Dutch Hindus are, in fact, Surinamese who settled in the Netherlands in the 1970s and 1980s.

The colonial legacy in both Suriname and the Netherlands has helped to foster a vibrant Hindu community among the Indo-Surinamese. The enduring practice of Hinduism in Suriname is a reminder that the Hindu Diaspora has been able to survive the trauma of indentured servitude, migration, and the challenges of acclimation in the farthest corners of the world.