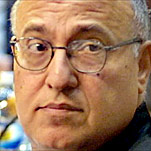 "The Palestinian Authority will never recognize Israel as a Jewish state ... Such a declaration would directly threaten the Muslims and Christians in Israel and prevent Palestinian refugees, who left their homes and villages a number of decades ago, from being granted the right to return to them." Senior Palestinian negotiator Nabil Shaath (left) shortly after the start of US sponsored peace talks

This rather shocking comment made at a Ramallah press conference last week by one of the supposedly more "moderate" members of the Palestinian leadership produced headlines throughout both the Arab world and Israel.

Amazingly it received nary a mention in the major American media!

As Mr. Shaath well knows, Israel was established and internationally recognized as a Jewish state more than 60 years ago. He also knows that Arab refusal to recognize that fact is at the very core of the Mideast conflict. So how does Shaath expect to win Israeli confidence and concessions for peace if Palestinians still refuse to accept Israel's Jewishness?

And why is Mr. Shaath so worried about Israel's Arabs, that 20 percent of Israel's population of 8 million whose forebears were smart enough not to run away during the 1947-48 Arab-launched war? Surely he knows that Israeli Arabs -- Christian, Druze and Muslim -- are full fledged citizens of the Jewish state. They occasionally face problems, but they always vote, elect their own members of parliament, work in the Israeli government, in Israeli industry, agriculture and commerce, are doctors and nurses in Israeli hospitals, teachers and professors in Israeli schools and universities, serve in the Israeli army if they wish, share in a democratic system unmatched in the Middle East and enjoy a standard of living that is the highest of most Arabs anywhere!

Mr. Shaath also fails to explain that when he speaks of "a Right of Return" he's not referring merely to survivors from 1948's original 700,000 or so Palestinian refugees. He is talking about all their descendants -- four (sometimes five) generations of them -- roughly 4 million souls by Arab count! Does the Palestinian leadership really expect Israel to commit demographic suicide as part of a "peace deal"?

The Palestinian exodus during the Arab war on nascent Israel is part of history. Most fled out of fear of war, others because they were urged to make way for "victorious" Arab armies, and some -- but certainly not most -- because Israeli troops drove them out in the heat of battle.

Other mid-20th century refugee problems were all quickly settled (the millions who simultaneously fled Pakistan and India, for example). But the Arab refugee problem was made to fester with the compliance of the Palestinian leadership. Israel, with millions of Jewish refugees at its gates, understandably refused to allow a hostile Arab refugee mass back onto Israel's sliver of land.

The Muslim world turned its back on its brethren. With the exception of Jordan, no Arab state has ever granted Palestinian refugees citizenship, let alone a permanent home on any of its millions of open acres . Instead Palestinian Arab refugees were kept penned up in overcrowded refugee camps - tent cities that have become squalid towns. They still live off massive international welfare doles, are used as political pawns by corrupt officials, and sit waiting for Israel to be destroyed so they can invoke a "Right of Return".

Compare that to the other, lesser know Mideast refugee crisis that coincided with Israel's birth - the forced exodus of almost 900,000 Jews from their centuries old homes in the Arab world; from Iraq, Syria, Lebanon, Yemen, Aden, Egypt, Libya, Tunisia , Algeria and Morocco. 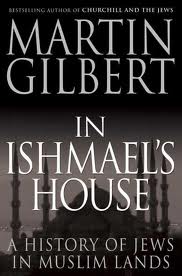 These Jewish communities, some of which had existed 1000 years before Islam, were rich in culture, with their own Judeo dialects and traditions, their own scholars and religious literature. The true story of this other Mideast refugee saga, is now told in a powerful new book by prize-winning British historian, Sir Martin Gilbert called In Ishmael's House; A History of Jews in Muslim Lands (Yale University Press).

To be sure, says Gilbert, Jews in the Arab world were subject over the centuries to occasional violence and forced conversion. Nor were they ever accepted as anything but Dhimmi -- "protected" but always second class citizens.

Still, by 1947, close to a million Jews lived in the Arab world. Many played primary roles in local economies, global trade, and medicine. Some became senior advisors to kings and presidents and helped enrich the cities of the Arab world ( Baghdad's pre 1948 Chamber of Commerce was 50% Jewish).

The historic decision to establish the State of Israel changed all that. Outraged by the idea of even a tiny Jewish state in their midst (and with an avaricious eye on their Jewish citizens' belongings), the Arab world turned on its Jews, targeting them with legislated discrimination, government sponsored anti-Semitic riots and murderous pogroms. Faced with growing threats, outright violence (some were hung for public amusement) and moves to completely disenfranchise them, close to 900,000 Jews were forced to abandon their ancient homes between 1948 and 1967 . In Cairo, the former home of of one of Egypt's wealthiest Jews became the residence of the Egyptian president.

Almost all were eventually "allowed" to leave their native lands on condition they signed agreements never to return and -- most important -- to leave their property and belongings behind. Recently uncovered documents indicate that much of this massive theft was a coordinated scheme by several Arab governments to grab Jewish property worth as much as $100 billion today. 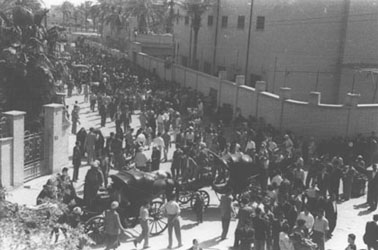 left: 1951, Baghdad Jews line up outside a synagogue to forfeit property to the Iraqi government and register for emigration permits.Today, with the exception of small communal pockets in Morocco, the Arab world is effectively Judenrein. Egypt which once had 180,000 Jews now literally has a handful of mostly aged Jews living in Cairo and Alexandria; Iraq which had 160,000 Jews now has 10, Libya and most other Arab states have none.

But here comes the difference between the fates of Arab and Jewish refugees. While the corrupt Arab world condemned Palestinian Arabs to statelessness, squandered opportunities to make peace with Israel and stole mega-millions in welfare funds, the Jewish state and the world Jewish community worked tirelessly to resettle its fellow Jews from Arab lands. More than half a million have settled in Israel where, after early years of economic and sometimes social hardship, they and their descendants have been successfully integrated and now form more than 50% of the Jewish population. Others found new homes in South America, Western Europe, the United Kingdom, United States, Canada -- rebuilding lives while trying to retain their own unique cultural ties and communal institutions. On wings of eagles; Yemenite Jews Are Flown to Israel credit:ruclip.com 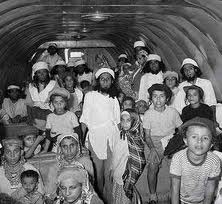 Most important, not a single Jew from the Arab world remains a "refugee", not one lives in a squalid camp or demands UN funding or a "Right of Return" to the Arab world. Above all, not one angry, Arab-born Jew has ever strapped a terrorist suicide bomb to his or her waist and climbed aboard a bus to murder dozens of innocents.

There are reports Shaath is fighting to win the primary seat on the Palestinian negotiating team. The buzzing swarm of apologists for the Palestinians will argue that Nabil Shaath's statement was strictly for "Arab street consumption." Therein lies the problem. It's time for the Palestinian leadership to tell their people that the only hope for peace is a two state solution -- to recognize Israel as the Jewish one, to build permanent homes for Arab refugees in the Palestinian Arab one and to seek resettlement for those who can't fit on it in other Arab lands.