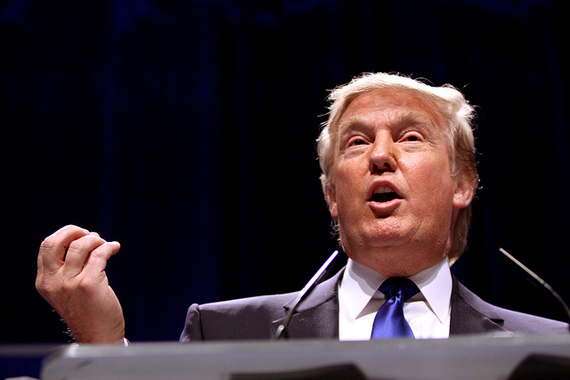 I write about investing, not politics. By invoking Donald Trump as an example, please understand that I'm taking no political position.

That said, there are some surprising lessons you can learn from Trump about investing. Here are two of them:

The power of indexing

While the exact amount of Trump's wealth is subject to debate, there's no reason to doubt his frequent reminder that he is indeed "really rich."

However, an August 2015 article in Fortune found that Trump would have been far more wealthy if he had invested in index funds.

According to the report, Trump's net worth increased approximately 300 percent to an estimated $4 billion (far below the $10 billion he claims) since 1987. But, according to an analysis attributed to the Associated Press, "if Trump had invested in an index fund in 1988, his net worth would be as much as $13 billion."

There you have it. No complex real estate transactions. No negotiating skill such as that touted by Trump in his books. Just a no-brainer investment in a simple index fund.

That's lesson No. 1. While few of us have Trump's outsized personality, intellectual acumen and ability to build a brand, we all can open an account directly with a fund family (like Fidelity, Vanguard, Charles Schwab or others) and invest in a globally diversified portfolio of low-management-fee index funds in a suitable asset allocation.

What do these scenarios have in common?

Scenario No. 1: Trump makes a series of outrageous statements that are demonstrably false. According to one fact-checking organization, "thousands and thousands" of people didn't cheer in Jersey City when the twin towers at the World Trade Center were attacked; Trump didn't "predict" the danger posed by Osama bin Laden; 81 percent of whites murdered in the U.S. this year weren't killed by blacks; and Trump didn't get to know Putin "very well" during a taping for 60 Minutes.

Some of Trump's proposals have been described as "xenophobic and radical." His most recent suggestion that the United States bar all Muslims from entering the country until the nation's leaders can "figure out what is going on" was widely criticized. Former Florida Gov. Jeb Bush called him "unhinged."

How has this conduct affected his poll numbers? He continues to lead the pack of Republican candidates.

Scenario No. 2: There is overwhelming evidence the majority of actively managed mutual funds fail to beat their benchmark in any one year, and especially over longer periods of time. It's not that actively managed funds never beat their benchmark. Some do. But the odds are so small it makes no sense to try. Investors would be better off reducing their costs and buying index funds.

Yet, the majority of investors continue to purchase actively managed funds.

Scenario No. 3: Pundits in the financial media predict the direction of the market and recommend stocks and mutual funds they believe are likely to outperform. Their track record, however, is dismal. There's no credible evidence anyone has the expertise to reliably time the markets.

Yet, investors continue to tune into programs on which these pundits are featured, and some no doubt rely on their "advice." These investors believe there is value to the stock markets insights of some "gurus," despite evidence to the contrary.

Each scenario shares a common thread.

Trump is rich and very accomplished.

Active fund managers are highly educated and intelligent. Collectively, they manage billions of dollars of assets. They have vast resources at their disposal, including teams of analysts and mega-computers.

Financial pundits also have impressive credentials. Jim Cramer, for example, went to Harvard for his undergraduate education and then on to its law school. He ran a successful hedge fund.

As explained in an article by Jeffrey Pfeffer in Fortune, we attribute positive attributes to people who have achieved success. If we are confronted with evidence they don't deserve our positive view of them, we tend to rationalize away this data so that our view will remain congruent.

We know Trump is a billionaire. We are not likely to believe some of his statements are ridiculous.

Active fund managers have very elaborate explanations for their opinions. We don't want to believe they are really just "emperors with no clothes."

Cramer and his colleagues are also successful. They are featured on major news outlets as a source of investing wisdom.

Our brains aren't wired to believe people can be successful in one area and spew nonsense in another. Pfeffer illustrates this point by noting the attention actress Jenny McCarthy receives for her negative view of vaccines, "even though she has no professionally relevant medical or scientific credentials."

The next time you are tempted to invest in actively managed funds, or to follow stock-picking or market-timing advice offered by your stockbroker, remember the lessons you can learn from Donald Trump. Instead of assuming the advice you are getting is valid or reliable, insist on seeing the peer-reviewed data supporting it.

If it is not forthcoming, run for the door.