You know that depression, diet soda and lack of sleep can affect your weight. But you feel happy, are steering clear of artificial sweeteners and getting your 7-to-9 hours every night. So why do the pounds keep coming? Here are 7 potential causes to check out.

The situation: You eat no differently than your friends, but you're the only one shopping for bigger pants.
Why you're gaining: Look at your stress levels. A small study in Biological Psychiatry suggests that stressed-out women who eat the same high fat foods as non-stressed women may be more likely to pack on pounds. Researchers had subjects eat the equivalent of a fast food meal and found that women who'd experienced a stressor (the most common: interpersonal drama, like conflicts with friends, family and coworkers; work stress) in the 24 hours prior to eating burned fewer calories at rest afterward -- about 104 calories to be exact. Over a year, the researchers say that could add up to almost 11 new, unwelcome pounds.
How to stop it: Keep healthy food (not the high-fat kind that the study focused on) handy for when stress inevitably starts to hit the fan, as it's less likely to lead to weight gain.

The situation: You love a bargain, and, lo and behold, a warehouse store just opened up one town over.
Why you're gaining: A group of economists think big box and warehouse retailers that sell food cheaper and in bulk may be partly to blame for the country's weight issues. After evaluating geographical data on BMI, obesity and density of big box/warehouse retailers around the U.S. between 1990 and 2010, they found that more stores led to an increase in obesity in the surrounding area. "If one new big box store opened in a city of 100,000 people, we'd see obesity levels increase by about 2 percent," says Charles Courtemanche, study author and an assistant professor of economics at Georgia State University. The researchers can't say for sure how these stores may contribute to obesity, but it may be because we typically buy processed food in bulk, not perishable fruits and vegetables.
How to stop it: If shopping at such stores is an important factor in your budget, be mindful about where you store your haul. You're more likely to eat what's right in front of you, so keep fruit on the counter and just a few packages of the chips or cookies that you got for a steal in an accessible spot in your kitchen (stash the rest on harder-to-reach shelves or in a pantry).

The situation: You're putting in more effort at the gym than ever.
Why you're gaining: You're letting your body's natural instincts run the show. Eating more is a normal, often unconscious reaction to an amped-up exercise regimen, says Glenn Gaesser, PhD, a professor of exercise science and health promotion and the director of the Healthy Lifestyles Research Center at Arizona State University. What surprised us is that moving less when you're outside the gym is another typical side effect. "It's a built in self-preservation response," he says. In a study Gaesser led, published in The Journal of Strength and Conditioning, 81 sedentary and overweight but otherwise healthy women started a fitness regimen, and after 12 weeks, even though all subjects were more aerobically fit, nearly 70 percent lost less fat than predicted. A few even gained up to 5 pounds of body fat. Food intake and activity levels outside the gym weren't being monitored, but Gaesser believes the women who gained fat were probably unknowingly compensating for their sweat sessions.
How to stop it: The study found that early changes in weight were predictive of later changes, so if you find that your scale is moving in the wrong direction during the first few weeks of increased exercise, it will likely keep going, so take a hard look at your food intake and activity levels outside the gym.

The situation: You just started taking a medication that's been on a market for a long time.
Why you're gaining: You know that many medications can lead to weight gain. "In about 1 out of 10 of the patients I see for weight issues, medications are a contributing factor," says Lawrence Cheskin, MD, the director of the Johns Hopkins Weight Management Center and Associate Director at the Global Obesity Prevention Center at Johns Hopkins. But older meds are often more likely to cause it than newer-to-market ones, particularly blood pressure like beta blockers and diabetes treatments, possibly because they weren't designed to avoid weight gain as a side effect the way new ones often are, says Cheskin.
How to stop it: First, figure out if it's really your meds that are the problem. Weight gain will start within a few weeks of taking a medication, "so if you've been on it for three years and you just started gaining weight now, it's not the medicine," says Cheskin. If the timing fits, bring it up with your doctor, who can likely suggest other medications that address your health issues without adding pounds.

The situation: You're making good on your goal of eating organic, and not just when it comes to produce.
Why you're gaining: You may be falling into a common misconception. Research in Judgment and Decision Making found that people presented with Oreos labeled as "made with organic flour and sugar" and regular Oreos estimated that the organic version had 27 percent fewer calories and said they believed it was OK to eat more of the organic variety. And a more recent study, in Food Quality & Preference, reported that people incorrectly estimated that cookies, potato chips and yogurt labeled as organic were lower in calories than versions that weren't labeled as organic.
How to stop it: Read your nutrition labels and remember that treats are still treats, even if they're organic.

The situation: You've had weight issues since your mid-teens.
Why you're gaining: Polycystic ovarian syndrome (PCOS) is believed to affect up to 10 percent of premenopausal women, and more than half of the women who suffer from it are overweight or obese, says David Ehrmann, MD, a professor of medicine and the director of the University of Chicago Center for PCOS. It generally starts in the mid-teens, and patients often have a history of weight problems that started around the same time. "It's not really clear if the PCOS is causing it, but we know that obesity and a tendency to gain weight are associated with the syndrome," Ehrmann says. In fact, a 2013 study in Obesity found that women with self-reported polycystic ovary syndrome had higher BMIs and greater 10-year weight gain than women without PCOS. Weight gain alone isn't a sign that you suffer from it, though. Other symptoms that merit a trip to the doctor: a history of irregular periods (the length between is often 35 days or more, so you may only have 6 or 7 periods per year), acne and excessive body hair in areas like your upper lip and chin, chest, abdomen, back and inner thighs.
How to stop it: The first-line treatment is often birth control pills to regulate your menstrual cycle and stop the hair growth, but "the options for weight reduction in a PCOS patient are no different than any other patient who's overweight," Ehrmann says. So while the weight gain may stop, you won't lose the pounds you gained unless you work at it through diet and exercise.

The situation: The pounds are packing on so fast that you're getting stretch marks -- and you know you're not pregnant.
Why you're gaining: You may have excess cortisol coursing through your body due to Cushing syndrome. There are quite a few scenarios that can cause it: taking corticosteroids, noncancerous tumors in your adrenal glands making them pump out too much cortisol or a tumor (typically benign) on your pituitary gland that triggers the release of a cortisol-regulating hormone (that particular situation is called Cushing disease). The syndrome is fairly rare, but it's most common in women between the ages of 30 and 60, says Anthony Heaney, MD, an endocrinologist and the medical director of the UCLA Pituitary Tumor Program, and experts believe the main reason for the weight gain is that cortisol can increase your appetite. Other signs your doctor will look for if they suspect Cushing include those stretch marks (especially around your midsection, where Cushing patients tend to gain the most weight), easy bruising, increased hair growth and signs of osteoporosis (excess cortisol can demineralize your bones).
How to stop it: Heaney says about 85 percent of Cushing cases involve a tiny tumor on the pituitary gland that's typically easily removed with surgery. Same goes for adrenal gland tumors, which can usually be snagged laparoscopically. Most patients do lose some weight once the tumor is gone (it can range from 10 to 15 pounds to 50 to 60 pounds, says Heaney) but need be monitored throughout their lifetime for possible recurrences. 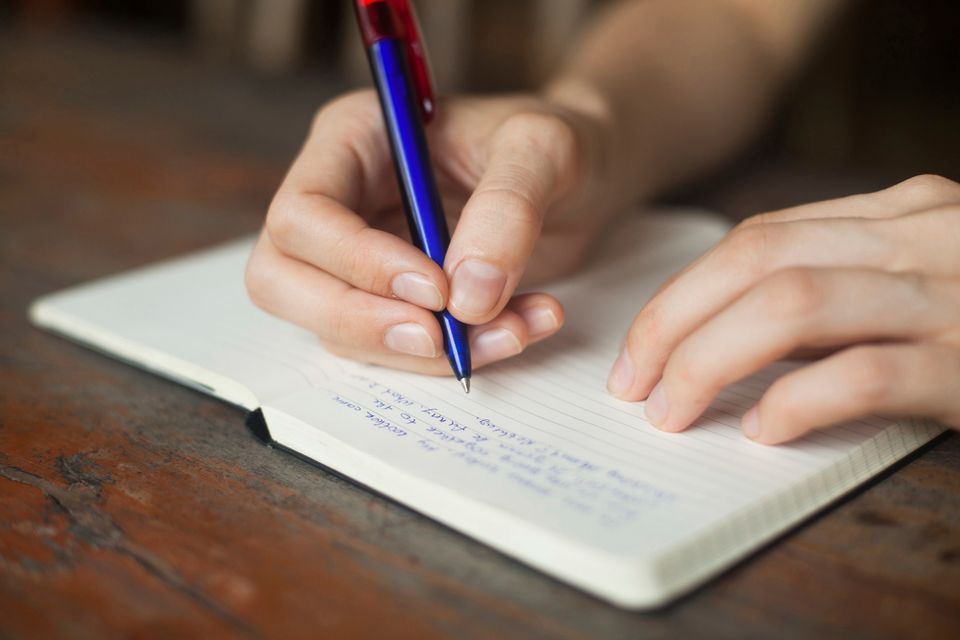 1 / 5
This Writing Exercise Could Be As Slimming As The Kind You Do With Hand Weights
Women who were asked to make a list of values (like relationships, politics and religion), and then write about the one that that was most important to them lost more weight, <a href="http://www.ncbi.nlm.nih.gov/pubmed/22157517" target="_blank">had lower BMIs and smaller waistlines</a> than those who didn't write about their values, found researchers from Stanford University and the University of Waterloo in Canada. In the journal Psychological Science, the study's authors speculated that <a href="http://www.psychologicalscience.org/index.php/news/releases/exercise-is-good-for-your-waistline-but-its-a-writing-exercise.html" target="_blank">when we focus on what's important to us, we feel better about ourselves</a> and more in control of our habits, making us less likely to turn to food in times of stress or emotional need.
Thinkstock