Twenty years ago, when a huge, ambitious show at LACMA celebrated the Splendors of Thirty Centuries of Art in Mexico, something strange happened in the very last room of the exhibition, dedicated to the best Mexican painters of the 20th century. There they were, the great masters: Diego Rivera, Jose Clemente Orozco, and David Alfaro Siqueiros, famous for their politically charged, monumental murals. In the same room were a few modestly scaled canvases by Frida Kahlo, with her trademark unsettling, intimate, pain-inflicted images. So, here she was: one female artist versus three super-macho colleagues. And you know who won the battle? Yes, you guessed it right: Frida left the boys in the dust. Their paintings, now more than a half-century old, came off as political chest-beating while hers retained all its personal intensity and artistic relevance. 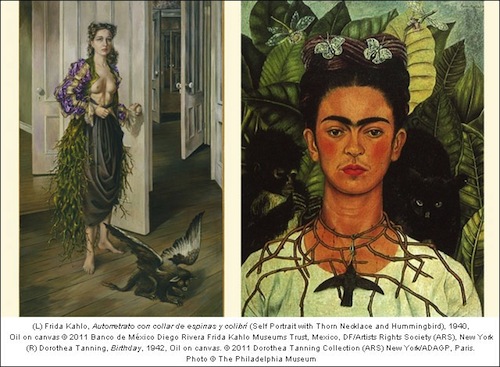 Now, in the new exhibition unveiled over the weekend at LACMA, Frida Kahlo is winning again, but this time it's a much easier battle. She's one of the 50 Surrealist artists from Mexico and the U.S., all of them women and most of them you've probably never heard of... for a good reason: Their talent and originality simply is not up to Frida's level. Though there are a few exceptions -- Louise Bourgeois' erotically charged sculpture, Lee Miller's knockout photographs, and Dorothea Tanning's whimsical paintings. Though it's not Tanning's paintings but her large, X-rated sculpture that stopped me in my tracks. I would cautiously describe it as the nasty, very nasty, sexual encounter between a full-scale couch and two naked creatures, alarmingly melting into each other. Enough said. 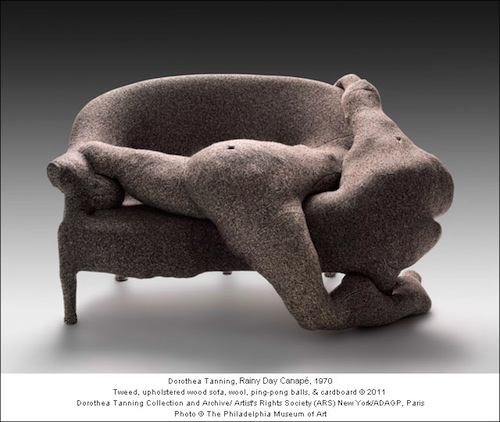 Taking into consideration all of the above, I wonder what Frida would say about the art of Ed Kienholz, whose early works are on display in a just-opened exhibition at L.A. Louver gallery. It's interesting to see Ed Kienholz gradually abandoning abstract painting in favor of narrative, sculptural assemblage. And that's where, ultimately, he hits the artistic jackpot, focusing his attention on the most provocative and painful political, social and racial issues of the day. 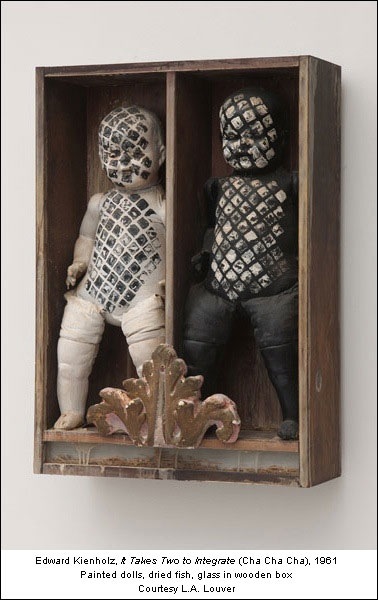 There is always something nefarious and upsetting about these sculptural assemblages, whether it's stuffed toy bears climbing over the carcass of a TV set with an American flag inside, or baby dolls, one white with black pattern and another black with white pattern. Even half a century later, Ed Kienholz's work delivers its powerful punches, knocking you off of your feet. 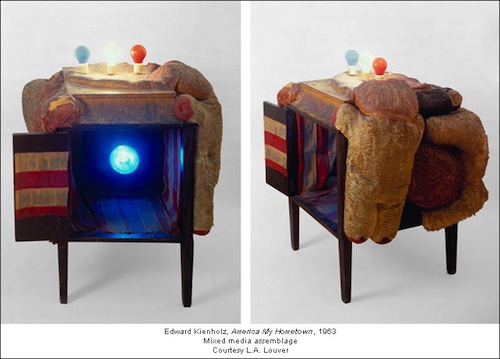 With Frida Kahlo and Ed Kienholz on my mind, and therefore plenty of Surrealism in the air, I wonder if Newt Gingrich -- the endlessly fascinating political gladiator whom we seemingly cannot get enough of -- if he took a lesson from Surrealist artists. How else can you explain his titillating promise to -- if elected as president -- build an American settlement on the moon with the prospect of turning it into the 51st state? Just in case he succeeds, I would like to send him in advance my resume for the privilege to serve as the Cultural Commissioner of this Surreal moonshine project of his. 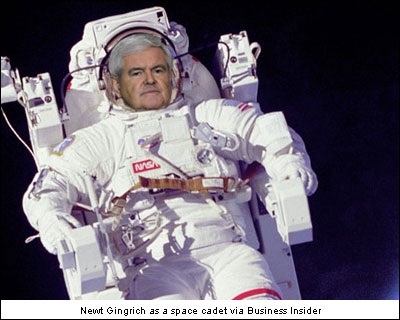 Edward Goldman is an art critic and the host of Art Talk, a program on art and culture for KCRW 89.9 FM. To listen to the show and hear Edward's charming Russian accent, visit http://www.kcrw.com/media-player/mediaPlayer2.html?type=audio&id=at120131surrealism_at_lacma_.