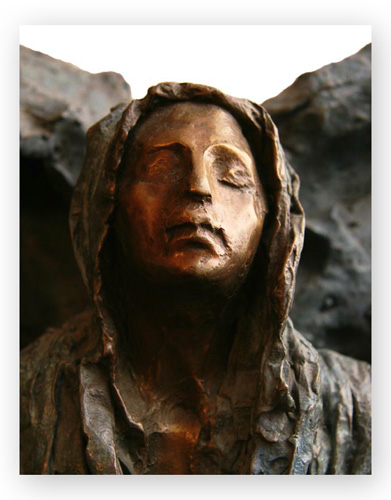 "The Peace Angels are what I and my team of artists do. Hopefully, this will inspire artists to do art that compels, provokes change." - Lin Evola 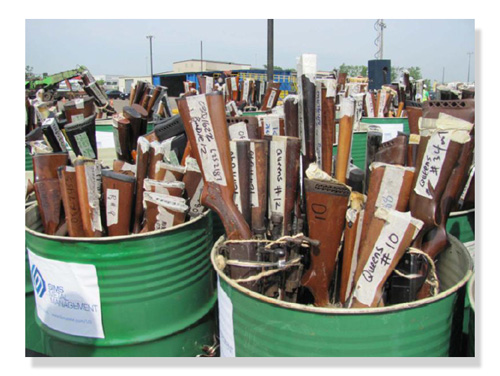 Recently, NYC Police Commissioner Raymond Kelly personally presented 946 illegal firearms to the Art of Peace Charitable Trust. The guns, surrender in a buy-back or confiscated from suspects, will be melted down and re-cast as a Peace Angel sculpture to be installed at Police Headquarters. The event is only the latest milestone in a nearly two-decade-long journey for artist Lin Evola, creator of the series. 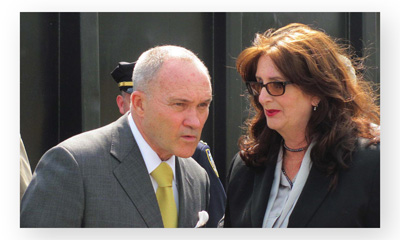 "I had a spiritual experience," she explained of learning, when her son was eight years old, that 1,000 children were being killed each year in Los Angeles. "I couldn't comprehend surviving such a loss... drawing out what I was feeling, the first Peace Angels became drawings of different cultures. The very first one and the next five were drawn at the LA County Museum, inspired by what I saw there."

The choice to express her emotion visually was natural for Lin. "Art overcomes the constraints of the word. Art is beyond language and engages all the senses that it reaches." It's a lifelong devotion for Evola. "Art is my first language and the one that I am most proficient," she says, "I learned to walk and talk at the same time that I learned to draw. It is who and what I am."

Evola discussed her chosen medium for the Peace Angels: "A sculpture lasts a million years... Clear communication would have to bridge age groups, sex, races, all people, to do what I had in mind -- shift consciousness... I would have to be exact." The substance of the art has a clear meaning as well. "Contemporary weapons -- swords to plough shares -- a human axiom as old as humanity itself." 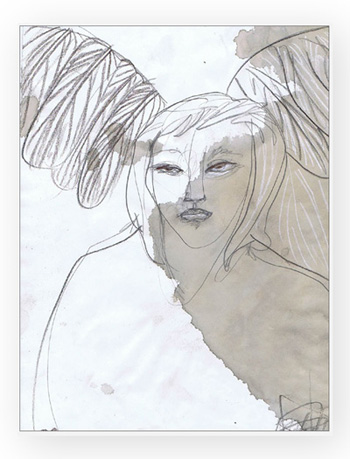 The project has brought the artist to many places and in contact with people she would not otherwise have met, experiences which intensify her passion. When she met President Halilovic of Bosnia-Herzegovina after the war in the Balkans, she learned that, "After the war ended, a secondary plague ensued, where hundreds of children were dying by being shot or shooting each other as they located the weapons their parents hid to protect their families from future potential threat."

She speaks of "the outreach of pain of the loss of one person. When one child is killed, parents suffer; some die. Communities change."

"The same mechanism of consciousness that takes place to cause the action called violence, is what needs to shift to send that volition in a direction that protects," Evola realized. "Causing peace is purposeful. It takes effort and paying attention. It takes respect and being awake."

As Americans, we are still reeling from the effects of mindless violence almost a decade after September 11, 2001. "I still suffer from grief," said Evola, "I know many people do." Lin and her husband Daniel Peabody-Smidt "brought the Renaissance Peace Angel from Santa Monica to Nino's Restaurant to stand sentinel during those dark days. The firemen, police officers and rescue workers signed the cement base." 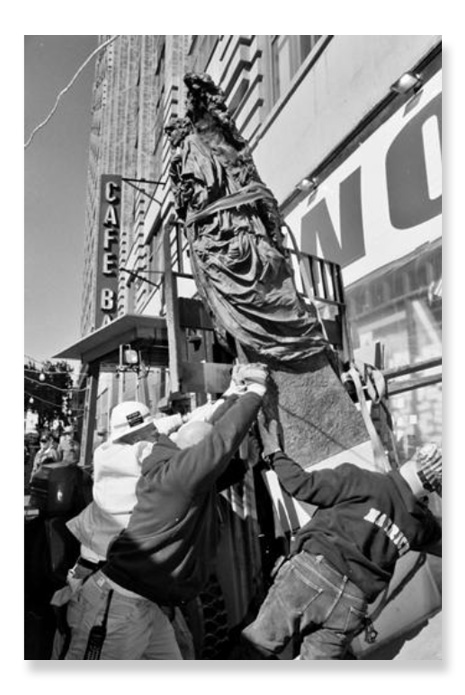 Both were exposed to toxins, and while Lin was able to recover with treatment, Daniel lost his life in June of 2005. "My drawings have only been black and white since Daniel passed," she said. 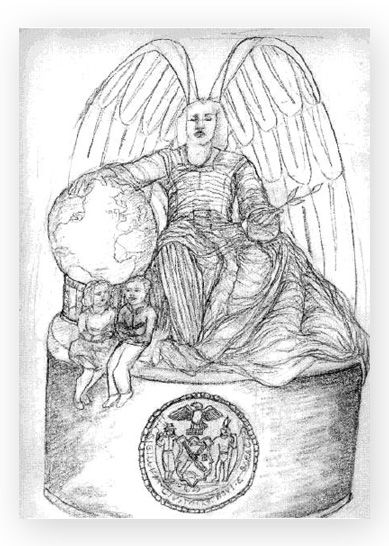 Lin Evola and the Art of Peace Charitable Trust continue her work to defuse violence with art, a goal of which she will never lose sight.

"What I have learned the most in the many, many stories, is that there can not be one sliver of energy that is ambiguous or off in creating a better life for your children, " she said. "You have to live what you believe." 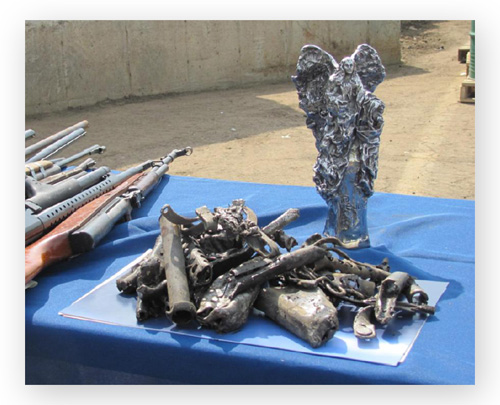 Small Peace Angel with weapons to be re-purposed

All images courtesy of the Art of Peace Charitable Trust