In 1967, when daredevil Evel Knievel was getting his motorcycle-jumping career off the ground, he had the audacious idea to leap the signature fountains of the famed Las Vegas Casino, Caesars Palace. Posing as big media reporters, he is said to have placed calls to Caesars CEO Jay Sarno and gush, So tell me about this Evel Knievel's plan to jump the Caesars fountains? The Vegas chieftain of course knew nothing of the stunt, but soon enough wanted to meet Evel and set it up. Sound familiar...? 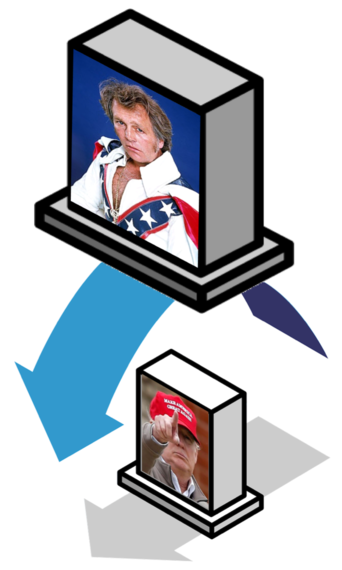 Reading The Washington Post's account of Donald Trump's PR guy impersonations, I wonder if Knievel and Trump were ever friends. Their master of surrogacy, after all, is unique. Here's why:

In the businesses of influence, surrogates abound. They are the people and organizations that do the playmaker's bidding, and there are three types that distinguish their moves and motives:

Partner A coequal. A surrogate who operates as a peer, typically receiving reciprocal support in pursuit of a common purpose. Think Bill Clinton to Hillary.

Proxy A hired gun. A surrogate who advocates for another player, typically for consideration. Think Stephen Curry for Under Armour.

Plant A secret ally. A surrogate whose methods and motives are unattributed or unknown to others. Think of a PETA spy in an animal lab.

This third surrogate, the Plant, is the type that Evel Knievel used to dupe his casino client and that Donald Trump is alleged to have used to spin reporters and embellish his exploits. The twist is that they played the secret surrogates themselves, never entrusting their shady work to others. Plants, after all, are notoriously hard to control, often expensive, and inherently unethical. I'll just do it myself, Knievel and Trump probably figured.

For more on the Plant, visit here or read this expanded account from The Elements of Influence on the cunning of Knievel and other too-clever influencers.