Something about today's NSA poll results seems familiar. Steve Shepard asks a question about questions. And is Rand rising? This is the HuffPost Pollster update for Tuesday, June 12, 2013.

CBS FINDS OPPOSITION TO MASS PHONE RECORDS SURVEILLANCE - A new CBS News poll finds support for NSA tracking of terror suspects but opposition to the collection of phone records of ordinary Americans: "Seventy-five percent of Americans approve of federal agencies collecting the phone records of people the government suspects of terrorist activity, but a 58 percent majority disapproves of this type of data collection in the case of ordinary Americans...When asked if the government's collection of Americans' phone call records is a necessary tool to help find terrorists, a slight majority of 53 percent say it is. There is broad support for the government monitoring the internet activities of those living in foreign countries. Seventy-two percent of Americans approve of this practice and there is agreement on this across party lines." [CBS]

Different story than Post/Pew poll. Why? - The new CBS results shed further light on why initial poll findings on the NSA phone records surveillance have varied. They show that Americans are more willing to accept surveillance targeted at terror suspects but not for "ordinary" Americans, and many may both "disapprove" of the collection of phone records while also granting that the practice is a "necessary tool." The Washington Post/Pew Research poll released on Monday, which showed 56 percent support for the NSA phone record surveillance, described the program as affecting "MILLIONS of Americans" (not all) and asked whether the program was "an acceptable or unacceptable way for the federal government to investigate terrorism." [Pew Research] 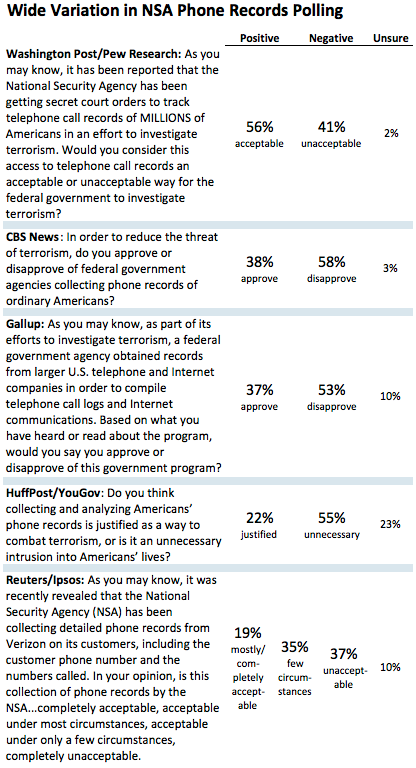 Gallup finds results similar to CBS - "More Americans disapprove (53%) than approve (37%) of the federal government agency program that as part of its efforts to investigate terrorism obtained records from U.S. telephone and Internet companies to 'compile telephone call logs and Internet communications.'...These results are from a June 10--11 Gallup poll. Although the current survey context was different, these results are similar to those obtained in a May 2006 Gallup poll measuring support for a government program that 'obtained records from three of the largest U.S. telephone companies in order to create a database of billions of telephone numbers dialed by Americans.' In that survey, 43% approved and 51% disapproved." [Gallup]

Reuters/Ipsos: Many in the middle - A Reuters/Ipsos online poll also released on Wednesday found that while "nearly half of all Americans [53 percent) say the U.S. government's broad surveillance tactics are acceptable within limits," only 19 percent said their were either "completely acceptable" or "acceptable under most circumstances." Far more (35 percent) said the phone records surveillance was "acceptable under only a few circumstances," and 37 percent said they were "completely unacceptable." [Reuters]

Deja vu - Something eerily similar happened seven years ago, when an earlier story broke about the NSA gathering domestic telephone records. Media pollsters tried to gauge reactions, and seemingly minor differences in questions produced widely varying results. Back in 2006, we offered this take: "If we read a bit beyond the face value of each poll result, we can see evidence of a large number of Americans that feel strongly cross-pressured on issues of protecting privacy and investigating terrorism...The most clear-cut evidence of the underlying cross-pressure comes from two questions with nearly identical wording... asked on last week's CBS News poll: 'To reduce the threat of terrorism,' 69% said they would be willing to allow the government to monitor the communications of 'Americans the government is suspicious of.' At the same time, on a question with nearly identical wording, only 30% would be willing to allow the government to monitor the communications of 'ordinary Americans on a regular basis' in order to combat terrorism. The lesson we could all stand to learn here is that on issues of public policy no single question provides a precise, 'scientific' measure of the truth. The most accurate read of public opinion usually comes from comparing the sometimes conflicting results of many different questions on many different polls and understanding the reasons for those differences." [CBS.com, h/t @DemFromCT]

A sampling of pollster responses:

@HotlineSteve @MysteryPollster Doing both, short then detailed, can also be a good option in the right situation (and if we have the time)

-Most people think the NSA is lying about the scope of its phone tracking. [YouGov]

-Mark Mellman reviews the complexity of public opinion on the NSA surveillance. [The Hill]

-Seth Masket sees no hypocrisy in partisans shifting their reactions, since "it's hard for poll respondents to evaluate NSA surveillance...without considering who's in charge of it." [MischiefsOfFaction]

-Gridlock is the reason Americans offer for why they're down on Congress. [Gallup]

-David Hill sees a parallel between George Wallace and Republicans standing in the path of an immigration deal. [The Hill]

-Republican pollster Matthew Jason reviews recent polling on whether undocumented immigrants should be allowed to stay in the U.S. [POS]

-Quinnipiac is now conducting polls in Iowa and Colorado. [Quinnipiac]

-Private data being collected by someone other than advertisers? Outrageous. [The Onion]