A video by Saudi youth seeks to promote scientific reasoning and civil discourse.

How do Saudi youth view their country's foreign policies, domestic policies, and future? The question is especially important because Saudis under the age of 25 amount to 51 percent of the population; add Saudis into their mid-30s and the number approaches 75 percent. Amid alarming unemployment rates and a push to end the welfare state through drastic reforms and austerity measures, young people's loyalty to the establishment over the next few years will be severely tested.

I recently had the opportunity to gauge Saudi youth perspectives through some fresh statistical data. Saudi Arabia's Depth Consulting, a new private research company, has conducted a significant opinion survey of the population. The study was self-funded--intended to serve as a loss leader for the company to stimulate interest among potential clients in the Gulf, as well as test its own machinery for polling and metadata research computation. Yusuf Hamidaddin, the company's General Manager, invited me to review, analyze, and write about the results, as well as pose questions about the manner in which the survey was conducted. He stipulated no control over what I wrote about the data.

Three key findings stood out. First, amid the kingdom's region-wide proxy conflict with Iran, Saudi youth are surprisingly disinterested in foreign affairs relative to domestic matters. When they do look outward, worries about the kingdom's adversarial relationship with the Iranian government itself are exceeded by a focus on the specific proxy conflicts of Iraq, Syria, and Yemen, followed by Saudi relations with its American and British allies. The Palestinian issue, even when grouped together with several other traditional foreign policy priorities, runs a distant fourth.

The second finding concerns the aggressive and widely touted domestic economic reforms plan known as "Vision 2030," which aims to reduce dependence on oil by curbing largesse, diversifying the economy, selling off a piece of the oil juggernaut Saudi Aramco, and fostering greater transparency and cosmopolitanism to attract foreign investors. Saudi youth seem to vacillate between confidence in its ultimate success and anxiety about its immediate impact. Most share a reflexive desire to continue enjoying the benefits of the welfare state. Meanwhile, though a package of new socioeconomic projects has been launched for the purpose of benefiting Saudi youth, few are aware of it.

The third finding speaks to the controversial issue of dynastic succession: most young people would prefer that upon the passing of the present king, Salman bin Abdulaziz, he be succeeded by 31-year-old Deputy Crown Prince Mohammed bin Salman--as opposed to the actual Crown Prince, 57-year-old Mohammed bin Nayef. Mohammed bin Salman's popularity as reflected on Twitter discussions exceeds that of all other Saudi royals.

A more detailed review of the poll and its outcomes also reveals areas in which older and younger Saudis disagree--and speaks to broader problems peculiar to opinion research in an authoritarian environment.

The study was based on a combination of telephone interviews with Saudi nationals and scrutiny of metadata emerging from nearly 15 million Saudi tweets. The two varieties of information were designed to fill in each other's missing pieces: on the one hand, the opportunity to hold a human conversation carried the promise of richer data. But anxieties in any Arab country about holding a frank discussion with a stranger, born of generations of authoritarian rule, have consequences that compromise the data: a large number of people decline to participate, and those who do are likely a self-selecting group whose responses skew in favor of the establishment, either because they genuinely support it or because they feel uncomfortable saying otherwise. As to the other method of research--scrutinizing Twitter activity--it presents a potential corrective to the former problems in that fast-fingered Saudis likely interact more freely with each other over social media. But plenty of Twitter users in Saudi Arabia impose self-censorship as well--and many seemingly human tweets have actually been generated by internet bots. The pollsters recognized these problems. With respect to the telephone questionnaire in particular, they took care to raise the most sensitive issues only indirectly.

60,500 phone calls were made via random-digit-dial robo-calls to cell phone users. Of this massive number, only 561 people agreed to participate. Women were significantly underrepresented, as were youth (18-34) relative to older Saudis. But geographical distribution among the three major provinces (Riyadh, Mecca, and the Eastern Province) was fairly representative, as were indicators of employment, retirement, and educational degrees. As for the tweets--massive in number and chosen at random--it is safe to assume that they reflect a cross-section of the country's Twittering masses, an overwhelmingly young community in which men narrowly outnumber women.

With respect to their country's foreign policy, most phone respondents conveyed broad confidence and support. Asked about their degrees of satisfaction with the Saudi-led military intervention in Yemen, the kingdom's newly muscular approach to the region overall, and its commitment to safeguarding fellow dynastic states and Egypt, positive responses ranged reliably between 60 and 80 percent, and mostly above 70 percent. Tweets on these matters reflected even greater support, suggesting that younger Saudis are more enthusiastic about the country's present assertive stance.

But phone respondents tended to break with such expressions of support when the questioning turned to Iran in particular. Asked about their degree of satisfaction with "Saudi Arabia's relationship with Iran," 13.19 percent said that they were "very dissatisfied." Slightly more than 44 percent said, "I don't know"--a choice that probably included still more "dissatisfied customers" who were reluctant to express their views outright.

Some perspective on these responses emerges, in turn, by comparing them with Twitter chatter about Iran: Only a minuscule number of tweets concerned Iran at all. More than half dealt with domestic matters. Proxy conflicts in Iraq, Syria, and Yemen constituted the second largest share, followed by relations with Saudi Arabia's traditional Western allies. Running distantly in fourth place was a combination of slivers that included Egypt, Turkey, and Palestine.

The Twitter data about Iran, considered in light of the skew toward older Saudis in the telephone survey, also hints at a generation gap in the kingdom over outlooks toward the country: whereas older Saudis would prefer to see the kingdom adopt a more conciliatory stance toward Tehran, young people are comfortable with the present war footing. 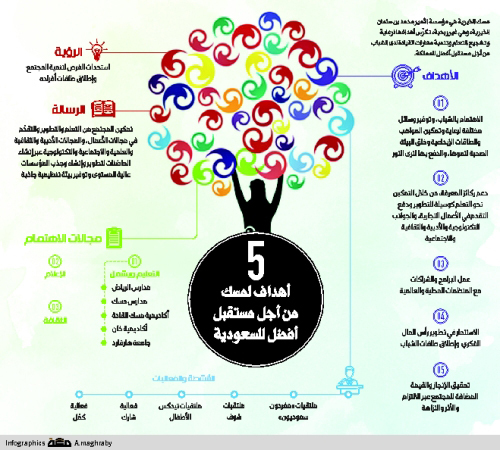 In a local Saudi newspaper, the Misk Foundation publishes its "five goals for a better Saudi Arabia." They include new training and learning programs for young people, to be developed in partnership with global educational institutions.

Asked to rate the kingdom's management of Saudi economic reforms overall, phone respondents' answers were again mostly positive. Support for the domestic policies trailed that of foreign policy only slightly, at a hair over 65 percent. But asked more specifically about the reform plan's component parts, there was considerable equivocation.

For example, when asked, "Do you believe next year's Saudi budget should be an austerity or an expansionary one," only 12 percent called for austerity measures. 34.4 percent preferred an "expansionary" economic policy, and the majority--nearly 54 percent--said, "I don't know." This apparent preference for a perpetuation of the rentier economy would seem to reflect anxieties over the potential loss of a job or a spike in the cost of living. As to "I don't know," it may, in this instance, be as much a cloaked expression of negativity as a genuine reflection of lack of knowledge. The reason I say so is that other data from the phone discussions of domestic affairs indicates that key details of the kingdom's reform plans have not been well communicated to the population.

Consider, for example, what respondents had to say about a series of new youth initiatives, under the umbrella of the nascent "Misk Foundation," which aim to professionalize Saudis' social media skills as well as build a culture of charity and social solidarity among young professionals. More than 86.6 percent of respondents were not aware of the Misk Foundation, let alone its component projects. What they did know about was the Prince Salman Charity Housing Trust, an anti-poverty and housing support fund dating back to 1997. It stands to reason that over the past 19 years, as a generation of Saudis came of age, they discovered the Charity Housing Trust in the course of seeking out any and all government benefits that could help them build a family and own a home. The purpose of the Misk Foundation is less concrete than a housing fund and more difficult to explain. It aims to acculturate the population to new patterns of behavior and a different professional outlook, as opposed to delivering an immediate, tangible benefit. Yet, ventures like Misk are vital to the success of "Vision 2030," which only works if young people adapt to a new "knowledge economy" and help shore up a social safety net for those who lag behind. (Researchers wishing to follow popular responses to Misk Foundation programs among Saudi youth can click here for some relevant links.)

The Question of Succession

An issue with profound implications for the country's future, widely discussed in the U.S., is the question of dynastic succession, and the extent to which the generation gap among the three senior leadership figures might play into it. The Crown Prince, 57-year-old Mohammed bin Nayef, holds sweeping intelligence and domestic security powers. Deputy Crown Prince Mohammed bin Salman, 31, holds unprecedented authority for a man his age--principally over defense and the economy. He is thought to be the architect of the war in Yemen, as well as the "Vision 2030" reforms plan. Which of the two princes will succeed King Salman bin Abdulaziz is a subject of global controversy, with rumors swirling of a plan for the Deputy Crown Prince to leap over his superior.

The sensitivity of the subject would naturally make it difficult for pollsters to broach it directly, inasmuch as Saudis who prefer a different chain of succession than what is officially prescribed are less likely to say so to a stranger. Strikingly, despite such reservations--and among a pool of telephone respondents skewed toward Saudi Arabia's older minority--more preferred "the youth to take a major position in government" than that "more experienced individuals" assume the reigns. A plurality called for the "more youthful" and the "more experienced" to share power, while over a quarter said, "I don't know." Adjusting for the age skew, and on the assumption that more of the older respondents prefer "older leadership," the data suggests that a majority of the population would prefer that Mohammed bin Salman succeed his father. Twitter, for its part, reflects a fixation on the 31-year-old prince: his name figures into 76 percent of all tweets about the royal family. Metadata used to classify tweets as "positive" or "negative" indicate that the many references to Mohammed bin Salman are mostly favorable.

All of these findings beg further questions about a country so long regarded by outsiders as inscrutable. Considerably more data would be required in order to factor Saudi public opinion into American policies shrewdly. But the "Depth" survey is worth mulling for the initial glimpse it provides into a society veiled for generations, as it rapidly opens up to the world.

This article first appeared as an E-Note of the Foreign Policy Research Institute.