Snitching can get you killed. That much I understood growing up in the 'hood. In kindergarten, I was taught not be a tattletale. But to tell on bad guys, on the criminally minded, especially those who breathe bloody murder, is a more serious matter than being a little, tattling toddler.

Lately here, particularly in light of the senseless violence that continues to claim innocent lives in Chicago, I have heard the lambasting of the good people of terrorized neighborhoods for not readily coming forward with information on murders. I have seen some shaking their heads, shoulder shrugging, and essentially blaming those unwilling--at least reluctant--to tell, as being in some way complicit.

Some even seem roiled that someone might witness a murder and be reluctant to come forward to police. And, in fact, they convey the sense that those unwilling to be witnesses are somehow less human, less feeling and less willing to assume responsibility, less eager to play a role in helping turn their neighborhoods around.

In my experience of growing up in an impoverished Chicago community like those under siege, it boils down to an issue of trust. And many who live in the city's most murderous neighborhoods--who have also witnessed police and political corruption and a trail of broken promises--simply don't trust the authorities enough to come forward and by doing so, potentially laying their lives on the line.

Whenever gunfire thundered in the night in my old neighborhood,
I was always grateful when the scene was blocks away, relieved
that any blood spilled had not come nigh my front door.

It isn't that people don't want to tell. They do. And it isn't the case that they aren't concerned about their neighborhoods. They are. Nor is it simply a matter of fear, but the fact that to come forward is to risk everything, even in a world where "safety" is always relative.

In poor black neighborhoods, we have seen the revolving door of criminal justice. We have come to understand that there is a new breed of serial killer--young men who kill and kill and kill again. And we also know this: That when the feds seek witnesses in high-profile cases to bring down notorious mobsters and crime families, they at least have the good sense to offer witness protection.

They understand what's at risk for those who come forward. They also recognize the compelling need to end the scourge of America's most dangerous.

In my old West Side neighborhood, "body snatchers" are real. There, I have known of masked gunmen to creep upon their prey in the still of night as they sit on a porch unsuspectingly, to kick in doors and hold people at gunpoint, or else to kidnap, maim and murder.

They have come for a known gang leader in broad daylight, stuffed him in the trunk of a car while bodyguards watched helplessly. From a child, I have witnessed gunplay and gangs and drug dealers and pimps in shiny Cadillacs, glaring like the sun, and the police drive by street corners--where hustlers hawk their wares--and do nothing.

The Law--the police--in certain neighborhoods isn't necessarily the law. Once the flashing white-and-blues disappear, we who were left behind understood that we were then at the mercy of the lawless or at least left to protect ourselves by any means necessary.

For some, our insurance was God. For others, it was the gun. For others still, a little bit of both. But seldom did we consider the police.

Would someone who gave vital information to police stand more to gain, or more to lose? And if the bad guys should come for them, masked and under the cover of night, which of us could they then call? Would the cavalry arrive too late, if at all?

And furthermore, as in the shooting of LaQuan McDonald, 17, shot 16 times in October 2014 by a Chicago police officer, which of his police officers on the scene that night "snitched" on Officer Jason Van Dyke, later indicted in the incident on six counts of first-degree murder? And which city or county official snitched about Mayor Rahm Emanuel's apparent suppression of the McDonald case and also of the police dash-cam video that captured the shooting? Where was the line of snitchers then? Why should snitching be a one-way street?

And given the historic marginalization of black and brown life--and death--why would anyone ordinary citizen in one of the city's most dangerous neighborhoods think that losing their life for having been brave enough to speak out might somehow make the difference? What would prevent them from simply becoming like the scores of murder victims whose names week in and week out don't even make the newspaper's police blotter?

And yet, I have heard them--politicians, police and pundits--reviling the people of these neighborhoods for not coming forward. And I think to myself, "Easy for them to say. Let them lay aside their bodyguards, their chauffeur-driven limousines and their legal sidearm, and let's see just how brave they'd be." Instead we all leave the 'hood and go safely home.

Whenever gunfire thundered in the night in my old neighborhood, I was always grateful when the scene was blocks away, relieved that any blood spilled had not come nigh my front door. Except in a way, I always realized it was never that far away. That every evil that happened in my neighborhood, in one sense or another, always happened to us all.

I also remember wishing there was someone we could tell, someone who might be ready, willing and able to do something to end the violence and crime, in essence, to be able to snitch in a way that would not jeopardize our lives and our family's once the bad guys learned we had ratted them out.

What would happen if we diminished the risk and created a greater sense of assurance that the law would do their job in actually making the streets safe as well as protecting those who decide to turn killers in?

They still might not be lining up to testify. But I'll bet you'd find some willing to tell the truth, the whole truth and nothing but the truth. 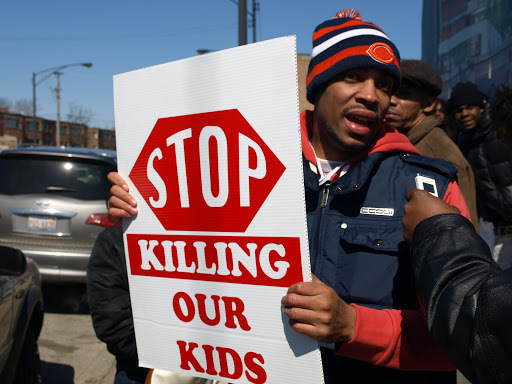 A man outside the funeral of a murdered child in Chicago hoists a sign. 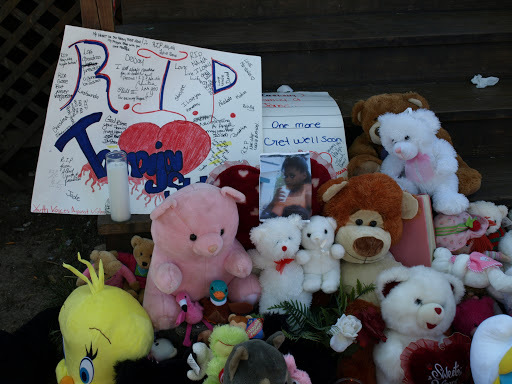 Memorials of balloons, teddy bears and other mementos have become an all too familiar sight in Chicago's West and South Side neighborhoods.
(Photos: John W. Fountain)