Some leered into the pig intestines and prayed there were no "stuff" still stuck inside, as the whole platter of pig offal stew stared at them, for brunch. Some just went for a piece of the accompanying sheet noodles. As the host of this unique food tour, I encouraged adventure with a useless "eat first, ask later or don't even ask" order. It was scary as a participant, not knowing what else was ahead when this was among the first order of the day.

But there was no stuff inside, as these came pre-approved and cleansed from the suppliers. It was no relieve though, as another 23 hours of non-stop-scarfing-down lay ahead at this possibly world's first 24-hour food tour held recently in sunny Singapore. Mind you, the "sunny" was the last thing these 35 world media food commentators, bloggers and writers were concerned about. With about 1,350 minutes left to go and with no official program, it was like a blind and hungry lion set loose in a huge petting zoo with elephants inside. All the organizers, the World Street Food Congress, wanted to do was to give them all an idea of the behind the scenes, life and times of a city with a buzzy 24/7 street food culture- who sold, who ate, the politics of eating , the economics of $3 chicken rice and the souls who defend food heritage of this most loved street food culture- a prelude to their next event's theme in 2015. They survived the pig offals or kway chap segment with no casualties. 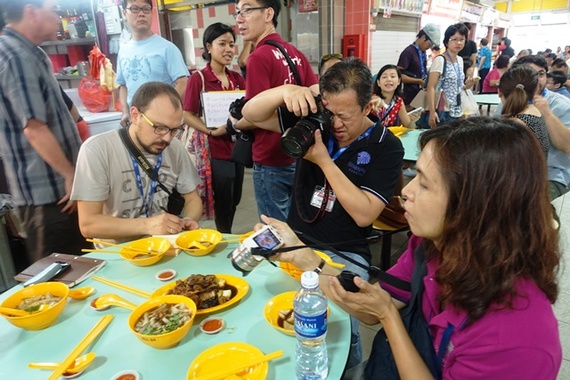 Curious, but they scarfed down this offal stew anyway

Then, they met Bjorn Shen, a modern day Woodstock chef who ditched his half-baked culinary education and now makes moolah in a Mediterranean restaurant but masquerades as a heritage food de-constructor. He took a humble bowl of bak chor mee or vinegar sambal noodles and turned into a mantou bao sandwich, not quite inspired by the ramen burger. His was a story about re-inventing the stagnant street food scene in Singapore. They loved his crispy, sour, spicy and meaty take on this old dish. Many old generation hawkers are set to retire in the coming decade and not many among educated and affluent youngsters are continuing on this culinary tradition. The few who do, are often featured as some new heritage food saviour or hero in the local media, but not all last the journey. Dinner, round one was a meet with the old master Chef Hooi Kok Wai at Dragon Phoenix Restaurant, the 80-year-old who invented the iconic Chilli Crabs in the 50s. He is a living culinary legend. His dish is found even at humble street food hawker stalls all over the island. A portion of the fear factor-esque mashed century egg with minced ginger and tofu was next at Immigrants Gastrobar. Again, no revolts, just curious unexplained love for it.

25 stops later at 1 a.m., at Gluttons Bay, a plate of what seemed like a break for this feeding frenzy.. banana coin tempura nuggets was served with kaya, that soulful coconut egg jam commonly found in between slices of toast with a slab of cold butter. It was no break, they scarfed it all down. Later, a very late, round four of dinner, was a stroll through the oily, scruffy and damp back lanes of Geylang, that red light district in death-penalty Singapore which comes alive post sunset. They tore into salted egg yolk prawn tempura with crispy sweet corn kernels - the recipe that Feran Adria ask from Chef Ah Meng, and failed to get from this street cuisine stall, JB Meng. What they got instead were looks from hookers plying the street that said - "yes, spread the love and send more men here." 5 a.m. was the "official" washroom and morning stretch break. No one stretched a tendon, they rested the eyelids. 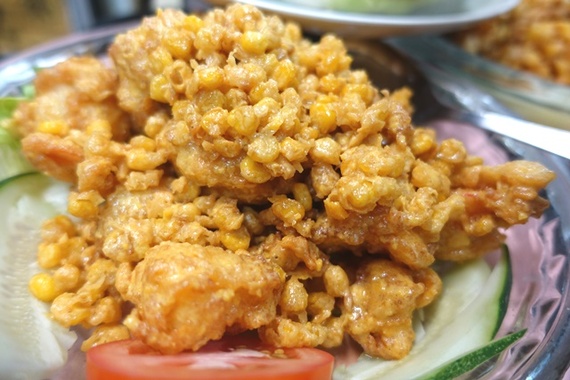 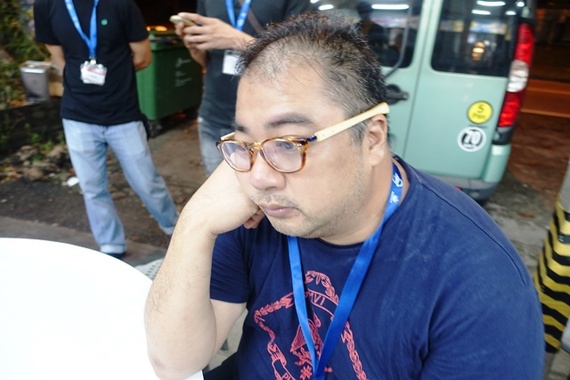 Sleepy but the food must go on

Stop number 31, was Laksa, for breakfast at 7 a.m. This spicy coconut curry noodle would be suicidal for the yawning and just awoken system, but the folks nary slept. They became born again Laksa followers after this session at a god forsaken, out at the boondocks, food hawker centre at Woodlands, just a stone's throw from the border with Malaysia. Bak Kut Teh followed and it was like a palate cleanser as by then, any broth, that strong and redolent with pepper and garlic (done with pork ribs) would ease the palate, but it only fooled them into a calm bliss. Even our duty doctor Wong on board, jumped in on the act and dutifully demonstrated the art of the kung-fu Chinese tea ceremony, commonly offered at such establishments. 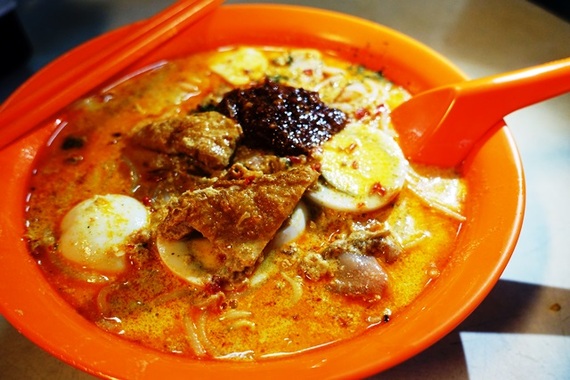 Crazy spicy laksa for breakfast 7am 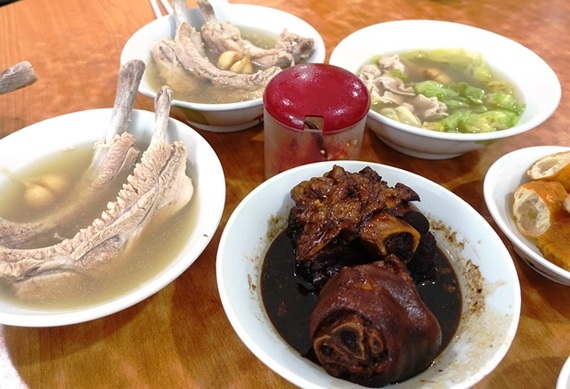 And why not this for breakfast

Finally, nasi padang. The group was sent to this hawker stall offering 30 Indonesian styled spicy meats, vegetable and seafood items. Beef rendang, stewed coconut jackfruits, spicy pickles, white curry chicken, sambal fish... were just the teaser appetizers. 33 stops and 42 items later, the tour ended on a high. When asked, one journalist bravely responded, "Just give me a day's break and I can do this for another 24 hours". He wanted more, and to know more about the planet of street food culture and the possibilities. 95% of these soldiers of street food fortune survived the ordeal. Congratulations. 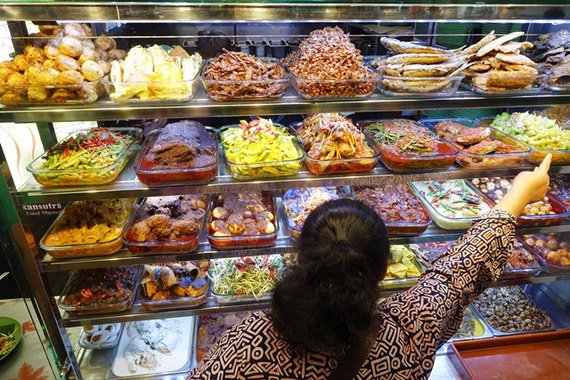 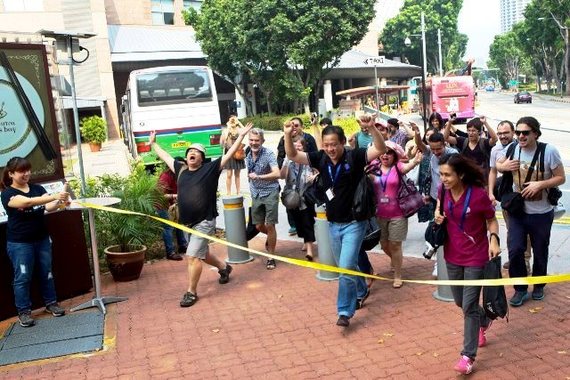 The first to complete the 24 hour feasting marathon

The 24 Hr Street Food Frenzy Safari will be conducted again at the World Street Food Congress (for the full tour listing) in 2015 in Singapore.
Email us at contact@wsfcongress.com.