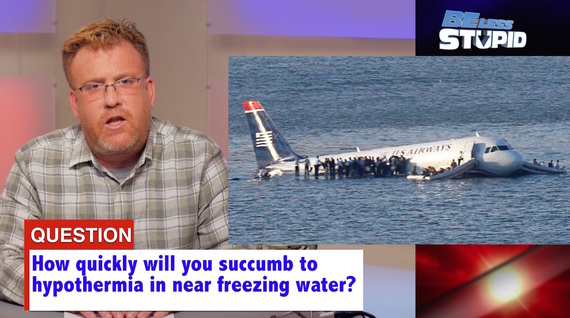 On January 15, 2009 US Air flight 1549 took off from New York's LaGuardia airport headed for Charlotte, North Carolina. Three minutes into the flight, the plane hit a flock of geese that crippled both of the jet's engines. Captain Chesley Sullenberger was forced to make an emergency landing in New York's Hudson River.

Amazingly, all 155 passengers and crew survived the landing. Rescue boats reached the downed plane within a few scant minutes. Which was great news for the passengers, many of whom were languishing in water that was nearly freezing, at 41 degrees.

I wanted to know what would happen to a person who spent more than a few minutes in 41 degree water... So, I did an experiment. On hand was a survivor of that US Air Flight, a former pilot from United Airlines, America's leading trainer of airline personnel of emergency procedures and the head of thoracic surgery from Cedars Sinai Hospital in Los Angeles to make sure we didn't kill anyone.

To find out what it's like being on a crippled airplane and how quickly the human body will succumb to the affects of hypothermia, check out the video below.

Jon Hotchkiss is a 14 time Emmy nominee and host of Be Less Stupid. Subscribe by clicking HERE.