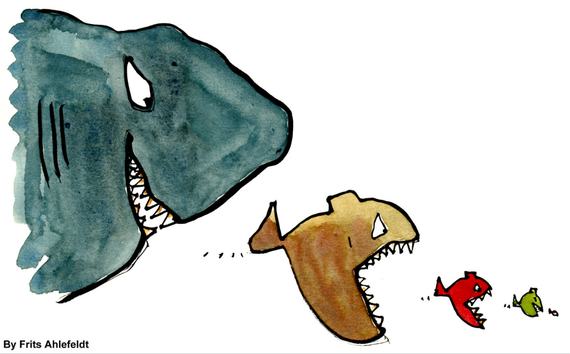 We all know about Darwin and his theory of evolution which, despite gaping holes in the evolutionary record, still makes pretty damn good scientific sense. And yet we also intuitively know that structuring society upon such a limited interpretation of life's processes as "survival of the fittest" is not the wisest path. Even steel magnate Andrew Carnegie, who clawed his way to the top embracing Social Darwinism, spent his later years as a philanthropist giving his money away.

On the flip side of Darwinism we have people like American psychologist Michael Tomasello, co-director of the Max Planck Institute for Evolutionary Anthropology in Leipzig, Germany, presenting evolutionary theory based in human cooperation.

Cooperation, competition--both dynamics contribute to our species' survival. But if we're to last even a tenth as long as the dinosaurs (and they managed to get in a whopping 135 million years-worth of stomping around before they could no longer adapt), we'd better come up with a better definition of "what works" than that.

When it comes to long-term species survival we need more than cunning, physically brawny specimens surviving to procreate at the expense of the weaker. We need more than the occasional get together holding hands and singing Kumbaya around the campfire. We need to wake up and realize that "what works" is a species that aligns itself with life.

In the book The Living Universe, Duane Elgin points out that the universe itself exhibits all the characteristics of a living system:
1) The universe is a unified whole
2) Energy flows through every part of the system
3) The universe continuously regenerates itself
4) There appears to be sentience at every level (what is called primary perception and movement towards self-awareness/perception)
5) The universe exhibits the freedom to make choices even down at the particle level
6) The universe reproduces itself through black holes and white holes

Unfortunately, at this point in time, humanity does not exhibit the characteristics of a living system.

Post Orlando, post Dallas, post Nice, post Atlanta (God help us, what's next?) it's not hard to see that, as opposed to the universe, humanity is not a unified whole. Energy in the form of education, knowledge, opportunity, money, food, sanitation and health services does not flow through every part of the system.

We're very good at #6. Reproduction ain't the problem. But what are we reproducing? The world doesn't need more hate mongers. We don't need more children in slums and bombed-out cities filled with hate for The Other--whether the Other comes in the form of Christian or Muslim or Jew, black or white, brown, yellow or red, cop or pedestrian-- rifles in hand, minds bursting with their elder's fear and superstitions.

Yes, we have birthed the New Thought Spiritual Movement and sustainable ecological awareness and food cooperatives and peace movements and Flower Children and Occupy Wallstreet ... but mainstream humanity lags far behind. We are not rebirthing and reforming ourselves in the spiritual or moral sense. There is growing sentience and a movement towards self-awareness. But the mainstream is trapped regurgitating the bile of the past.

And where will there be freedom of choice if the Military Industrial Complex--which people like Presidents Eisenhower and Kennedy warned us of--succeeds in locking us down in a corporate vise of economic manipulation and media control?

We must learn that 1) what works is what fosters life, and that 2) life is far more than mindless reproduction. Life is growth and evolution itself.

At the moment we are acting as if evolution has stopped. We think we have reached the pinnacle of life's expression and that this is as good as it gets. Which is precisely what's holding us back and precisely the ego mindset that needs to shift if we are to earn the right to continue to exist.

We must realize we aren't grown up. We must realize we have to grow up and extend the vision that change is possible. We must learn about the nature of the human mind and ego and how it traps us in limited, fear-based thinking, and then teach our children how to be greater. We must hold out the vision of a transformed, questing humanity that knows there is more and decides to reach for it ... together.