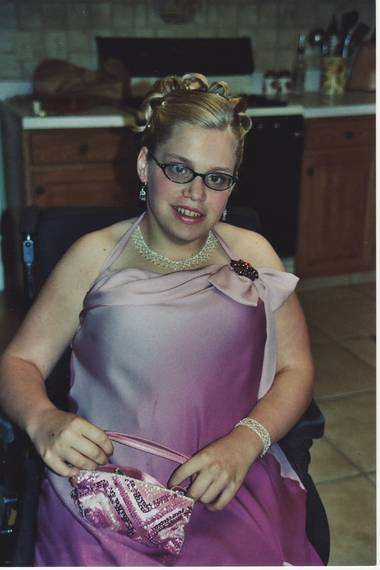 Now, looking at a picture of myself from just before my eighth-grade formal, over 10 years ago. I can honestly say I looked beautiful in my dress, and there was absolutely nothing wrong with my body, or my outfit, but I couldn't say that then.

For a long time, I couldn't even look at that picture, because I felt that dress ruined my life. I remember I didn't even like the dress when I wore it, although it would be kind of on point now, but I went to the dance anyway expecting to have a good time with my friends. Unfortunately, that is not what happened. I got to the dance and waited outside in the rain for my friends, and when they arrived they walked right past me, completely ignoring my existence. After a while, my guy friend I was with encouraged me to go inside and see what was going on. I went inside and found my friends, who informed me that they couldn't hang out with me that night because I had the same dress as some other girl in our group. I was completely crushed, I didn't even like my dress, and now my friends weren't going to hang out with me because of it? My guy friend tried everything he could think of to make things better, he even offered to find me duct tape so I could make my dress different, because we both naïvely thought the dress was the problem.

We were wrong. Those girls iced me out at school for the rest of the year, and over the summer I found a hate website they had made about me and some other girls. Reading all the awful things people were saying about me behind a computer screen almost destroyed me. It wrecked my self-confidence, and completely changed the way I felt about myself. That may have been the first time I was cyber bullied, but it wasn't the last.

Recently, I started a fashion blog about a month into the process I found out that a girl from one of the Facebook groups I was involved in was taking screenshots from my blog and viciously mocking my appearance on her Facebook page. It hurt, and it brought back all those horrible memories from eighth grade, but it also made me think. Why do we say, "words can never hurt me," yet also believe, "the pen is mightier than the sword "?

In our modern Internet age, Internet bullying, and trolling has become the norm. People say cruel things to people they disagree with simply because they can hide behind a computer screen, but we need to stop acting like what we do in our digital life isn't real. Digital and cyber bullying is just as harmful as physical bullying. It is not okay to personally attack someone on the Internet simply because you cannot see their face. We have to stop telling ourselves the lie that "they are just words." Words have tremendous power, and we need to recognize that and own up to it. What you say to people on the Internet can have real life consequences. Being bullied in middle school almost destroyed my life, but it didn't and I came out on the other end stronger, other people weren't so lucky. Teenagers across the United States have committed suicide because of cyber bullying. It's time to remember that not all bullying leaves physical scars and that what we say is more than just words. Why do we think it's okay to call somebody "fat", "stupid" or " ugly" when we disagree with them just because we're doing it over the Internet? Why do we think it's okay to send people anonymous mean messages on websites like Tumblr just because we are not saying these words to their face?

I think sometimes people forget that there are real people on the other side of the computer screen. They mock people in memes and on Reddit threads because they are different from them, without ever once taking the time to get to know the person or recognizing them as another, valuable human being.

Remember, with great power comes great responsibility. So, before you type, think "would I say this to this person's face?" If you wouldn't, you probably shouldn't type it either. Always remember there are people on the other side of the screen who will be affected by your words, and you don't know their story.