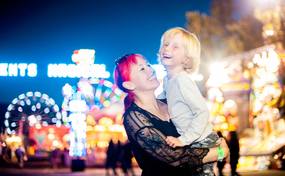 I've always been in awe of single mothers, imagining the true grit and dedication it takes to raise a child, or multiple children, on your own. I had projected grim determination and heartache onto the experience, but then several women changed my mind. There is Emma, a bohemian traveler who periodically relocates, always reinventing herself with success, taking Technicolor artistic shots of her son in front of urban murals, shimmering aquamarine bodies of water, and rustic stone steps leading to paradise (above, photo credit: Eric James).

And there is Lisa (below) who, with her two adorable kids in tow, does weekend getaways to clear rivers, amusements parks, and frequent trips to the ballet. Her kids' faces always shine with a clear innocence and delight that clashes with my stereotypes about struggling single moms and their disadvantaged kids. 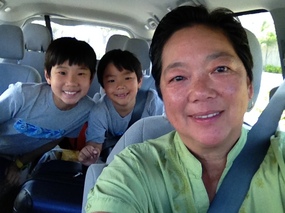 Clearly, economic realities, social privilege, race, and other factors of marginalization come into play in single mother scenarios and no two experiences are the same, but these women are clear examples of how to do it right and with gusto.

Early this year, after ending a 20-year relationship, I found myself joining the ranks of single mothers. With three children who were 2, 5, and 8 at the time, I was honestly scared. The school year afforded me some structure and time away from the kids to recharge and follow my own pursuits, but with summer fast approaching I was nervous about how I would survive all the togetherness.

At the same time, I had challenged myself with extreme self-sufficiency. I wanted to be able to do everything on my own, to prove to myself that I didn't need to rely on anyone to help me. In my mind and heart, self-sufficiency equaled freedom. I wanted to sink in to and accept this new role of being a single mother. I wanted to find a new me -- a me who felt confident I could do it right, and with gusto, all on my own.

The previous summer had been a hard one, fraught with many emotional challenges. I felt like I had let my kids down, unable to focus on making their summer special. I was determined that this summer, my first as a single mom, would be different. I imagined offering them summer camps, managing a vacation or two, and providing lots of fun and laughs. But then reality hit when I asked them what they wanted their summer to look like. Neither of my two older children wanted to do any summer camps at all, and my youngest was too young to go. We were going to spend the whole summer all together, all the time.

I told them I had two requirements: swim classes and summer reading. Otherwise we were going to wing it and hope for the best. Meanwhile, my best friend, and a very conscientious mother, was making lesson plans and constructing reward systems for her daughter that came close to a summer of home schooling. I admired her determination and dedication, but knew that it was all beyond me. I tried to think back to my own childhood to remember what I liked most about summer, and it was unstructured time. So I made that a goal too.

Each week I made sure we had at least two to three special outings to places we didn't usually go to. I took the kids places where I had previously refused to go without another adult to help me manage them, such as kiddie amusement parks. What I found was that I could do it. It was fine. It was more than fine. I took them on a camping trip to the beautiful Napa Valley. But I'm no fool, we went with my conscientious best friend and her daughter on that one. We stayed in a beautiful round yurt and cooked our dinner over an open fire. I became a hero when I perfected my marshmallow-roasting technique and served my kids s'mores. I learned that it was the simple new experiences that we shared together that held the most meaning. Not only did they see that I could care for them on my own and give them a fun summer, but I proved it to myself too.

One month into the new school year, and we are already deeply involved in fourth grade, first grade, and preschool. I'm not going to lie -- I do appreciate the hours the kids are in school, learning and growing, and allowing me to have time to work, create, and think without interruption. But there are few greater feelings than when the school principal approached me after school the other day and hugged me and said, "I just want to hug you. Your kids are so happy and well-adjusted." I smiled. I'm doing single motherhood just fine, and with gusto.

More:
Single Mothersdivorcesingle momsParentsSelf-sufficiency
Newsletter Sign Up
Raise the kind of person you'd like to know
Subscribe to our parenting newsletter.
Successfully Subscribed!
Realness delivered to your inbox